Moscow, Russia – What inspired the murder of Boris Nemtsov?

Russian authorities have pledged to find and prosecute the killers of the former deputy prime minister-turned opposition leader, while government critics claim the brazen slaying on a bridge outside the Kremlin walls was allegedly organised by security services.

President Vladimir Putin has described the killing as a “provocation”, and told Nemtsov’s 86-year-old mother the killers would be found and punished.

Many more Russians were adamantly certain about what provoked the killing. Tens of thousands rallied in central Moscow on Sunday to protest the murder, and many demonstrators carried banners that accused the Kremlin-funded propaganda machine of branding Nemtsov a “national traitor” and a Western-funded public enemy on dozens of television shows and in newspaper stories.

This machine is Soviet “agitprop” on steroids, critics say, also comparing it to the methods of Joseph Goebbels, Nazi Germany’s propaganda minister, or the Orwellian “Two Minute Hate” broadcasts.

This machine fuels hatred against domestic dissidents, former Soviet neighbours such as Ukraine, hawkish Washington, the decadent West – and anyone else who locks horns with the Kremlin. It frequently distorts facts, skilfully uses wrong footage, bluntly misinforms, and aggressively lies.

It uses hidden cameras, surveillance film, tapped phone conversations or intercepted emails. It employs an army of “political analysts” who come up with accusations and conclusions that perfectly fit the Kremlin’s current political agenda – without necessarily being logical or true.

“Propaganda kills” and “Mass media are involved in the murder” – some of the banners at the Sunday’s rally read. One of the protesters held a banner with photos of three odious television personalities. A sign on the banner read, “Guilty of inciting hatred.”

But there are more than just three spin doctors that toot the Kremlin’s horn.

“There’s hysteria, injection of hate, a search for enemies, for the fifth column, for State Department agents, traitors and so on – every day there is brainwashing practically on all television channels controlled by the government.”

“This brainwashing, implantation of hysteria, were the main reason for Boris Nemtsov’s massacre,” he added.

In the mid-1990s, Nemtsov – a former athlete with a charming smile and a mop of curly hair – was widely seen as a future successor of ailing and heavy-drinking then-president Boris Yeltsin.

But Putin became Russia’s second president, and Nemtsov soon turned into one of the most widely publicised anti-Kremlin bogeymen.

For years, he and other opposition figures have been the favourite targets of pro-government television broadcasts and print stories.

Nemtsov told this reporter last year that his phones were constantly tapped – and his whereabouts were often leaked to television crews and youth activists from pro-Kremlin groups who staged dozens of pranks against him.

They threw cakes in his face, tried to catch him in a huge butterfly net claiming he was a “political insect”, and dropped toilet seats on his car. Sometimes they got a beating from the muscular and easily excitable Nemtsov.

A young woman in high heels and sunglasses doused him with liquid ammonia – and turned out to be a cross-dressed man from a pro-Kremlin youth group. Another activist mistook a strange man for Nemtsov and used a hidden camera to record an amusingly absurd dialogue with him.

The pranks and Nemtsov’s response were shown on TV as separate news reports or part of bigger, “analytical” hatchet jobs – while the transcripts or recordings of his phone conversations were leaked online.

And the cause-and-effect relation is obvious here: The hatred that was pumped daily via federal mass media had to turn into blood.

Nemtsov was one of the “stars” of “Anatomy of Protest”, a two-part pseudo-documentary that “explained” how the opposition planned a coup in Russia and used Western money to organise anti-Kremlin rallies.

The second part of “Anatomy” was dedicated to opposition activist Sergei Udaltsov – who was sentenced to four-and-a-half years in jail last year for alleged “organisation of mass unrest” by a court that used the TV show as evidence.

The third part was supposed to be aired Sunday – and a preview that promised to reveal “why Russian opposition leaders secretly meet with foreign diplomats” – contained several glimpses of Nemtsov, Gudkov and other opposition figures.

But the broadcast was cancelled.

“You, dear creators of ‘Anatomies of Protest’, where Nemtsov was seen endlessly – each one of you is the killer from that bridge,” opposition activist Kseniya Sobchak wrote in an op-ed published by Slon.ru online magazine.

“And the cause-and-effect relation is obvious here: The hatred that was pumped daily via federal mass media had to turn into blood.”

The consolidation and transformation went on in three stages, according to Denis Volkov, Levada’s sociologist.

The first stage was a “slow tightening” of government control that lasted during Putin’s two presidential terms, he said.

The second stage was a rapid response to the massive protests against his return for a third presidency that erupted in the winter of 2011-2012. The response included “Anatomy of Protest” and its lesser clones.

And the third stage began after Russia’s takeover of Crimea a year ago – and resulted in the nearly total control of national television networks, coupled with a string of draconian laws that limited or banned “extremist” content online, in print and on the small screen.

The propaganda “reached unthinkable heights with the Ukrainian war”, he said. “Ukraine also became an outstanding excuse to tighten the screws inside the country.”

The Ukrainian conflict spawned an entire genre of political lies.

Lawmakers, “experts” and “witnesses” frequent television shows and unashamedly claim that Ukrainian police officers now wear swastikas and raise their hands in a Nazi salute – that they keep warm by consuming the blood of Russian infants.

They say Ukrainian soldiers were promised free land lots and two slaves each after they retake pro-Russian separatist regions; that some soldiers raped a 47-year-old woman with epilepsy; and buried an unspecified number of 12-year-olds alive after raping them.

Meanwhile, Ukrainian officials have allegedly organised extraction of organs from captive pro-Russian separatists to sell them to Western customers – and one of the customers, for example, requested 17 hearts, 50 kidneys and 35 livers, these talking heads say.

Last July’s television story on Channel One purported that Ukrainian soldiers publicly crucified a three-year-old boy in the eastern town of Slovyansk.

This reporter was in eastern Ukraine at the time and visited the city square where the execution allegedly took place. Half a dozen locals denied it ever took place – and used colourful obscenities when questioning the sanity of Russian television reporters.

Reviving and revamping the Soviet prototype

The Soviet Information Bureau, a news agency established in 1941, operated some 1,200 newspapers, hundreds of magazines, and 18 radio stations in 23 countries. After the 1991 Soviet collapse, it was renamed RIA Novosti.

By the early 2010s it was a living fossil – a relatively liberal media conglomerate that quickly adopted new technologies and used such unorthodox methods of disseminating information as rap music or traditional Russian limericks.

But in late 2013, Putin decreed to liquidate RIA Novosti and to create “Rossiya Segodnya” (Russia Today, not to be confused with the Kremlin-funded RT television channel), with Dmitry Kiselyov at the helm.

Kiselyov already gained notoriety as a host of a weekly television show in which he theatrically gesticulates, lowers his voice, and mimics, morbidly trying to expose yet another danger to Russia.

He threatened to turn the US into “radioactive ashes”, called reporters from Russia’s last remaining independent TV station “sensuous necrophiliacs”, and urged his viewers to “burn and bury” the hearts of homosexuals.

Following his appointment, Kiselyov said he aims to “restore a just attitude to Russia as an internationally important country with good intentions”.

His new consortium went international last November after launching Sputniknews, a news service that offers coverage in 29 languages, including Chinese, Dari, and Estonian. And despite a deepening economic crisis and cuts in many media outlets, its budget for 2015 approached 6.5 billion roubles ($1.05bn), according to the RBK daily.

Rossiya Segodnya’s press service was not immediately available for comment. 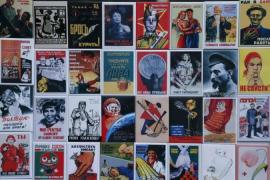 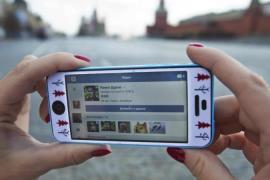 As the conflict in Ukraine escalates, Russia cracks down on media outlets and social media networks. 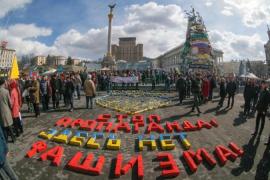 The Russian leadership has become entangled in the logic of its own propaganda. 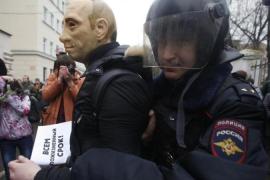 Riots erupt outside court as seven given jail terms of up to four years for 2012 protest against Russian president.