By Al Jazeera
A week ago, Egypt’s customs services in Alexandria port confiscated 400 copies of a book that documents the Egyptian revolution through graffiti.

A government official told a local paper the book was confiscated because it “contains elements that give advice on confronting police and army forces” and, therefore, a cause for concern.

On Sunday, the head of the Publications Censorship Authority, the body in charge of book censorship, told reporters that there was no “ban” ordered and that it was just an issue of “unpaid storage fees”.

The book, already on the market in Cairo since March 2014, documents the annals of the Egyptian revolution that broke out on January 25, 2011, through street art. It also contains 20 essays in English on the post-revolution street art movement.

Al Jazeera spoke to Basma Hamdy, co-editor of the Walls of Freedom, and a respected Egyptian artist, designer and educator, about the ban and what it means for the freedom of speech in today’s Egypt. Hamdy co-authored the book with Don Karl.

Al Jazeera: What was the main idea behind the ‘Walls of Freedom’ and how did it come about?

I saw some stencils in a street close to our house in Alexandria. I was so moved even though the piece was not very elaborate, but it made me feel that there was a spirit of rebellion. It made a strong impression on me. So naturally after the revolution when the works on the streets were echoing events, I began seeing a pattern unfold.

Almost every event that happened [during the revolution] was mirrored on the streets with art. And I knew the work was powerful because it created an instant connection with people on the streets.

I knew something had to be done to document what was happening, and being an academic, I knew a book would be the best solution. Don Karl was very passionate about documenting the street art movement too. He believes the graffiti on the walls of Egypt surpassed graffiti in other countries because it truly had the power to bring about change.

The revolution has been reduced to an empty shell. Its main activists are in prison, its main mechanism -protest - punishable by law, its media voices like Bassem Youssef, Belal Fadl or Ramy Essam demonised, the perpetrators or figures responsible for killing protesters are all freed, one after the other. So there is nothing left but a name. I feel we are living in a farce!

Al Jazeera: Can you take us through what exactly happened? what reasons were you given for the confiscation?

Hamdy: We learned through an article published in an online Egyptian news site in Arabic stating that the book was ‘instigating revolt’ and ‘demonstrating how to resist army and police authorities’ and that it will be further investigated.

We were never contacted directly but our distributor’s name in Egypt [the shipment was sent to him] was summoned for questioning according to the website’s source. Upon further investigation we learned that the censors were not in fact the ones making those statements.

On the contrary, the head of the censorship authority said that the book had been approved before and was distributed and sold in Egypt. It is still available in book stores there.

The problem happened when the books were stored for a long time in the port, even though storage fees have been paid regularly by the publisher in Germany, however, our distributor in Egypt did not collect them for logistical reasons. Our distributor’s lawyer suspects that this is what caused the Alexandria port authorities to open the boxes.

The censors are qualified to judge content of foreign language books and they are the authority responsible for making a decision to ban or allow a book to be distributed in Egypt.

However, it seems that someone must have found the book offensive because the statements ‘instigating revolt’ seem to emerge from the fact that the book documents the revolution.

In my opinion this reflects back on the state of frenzy and paranoia that has become very common in Egypt.

Al Jazeera: Is there any similar incidents where revolution-related books have been banned from circulating in Egypt recently?

Hamdy: I do not know of any revolution-related books being banned or censored. I only know of a number of translated books that have been banned.

Al Jazeera: Do you plan on taking any legal action?

Hamdy: I don’t think legal action is necessary. It is unfortunate that this happened, but we are hoping that it will become resolved once the storage fees are paid.

We are hoping the censors will overrule the customs or port authorities because we believe we have documented a crucial part of Egyptian history and Egyptians need to have access to it.

Al Jazeera: In the larger picture what does the book ban say about tolerating dissent in today’s Egypt?

Hamdy: I still believe this is not an official ban, but the incident reflects back on the lack of tolerance and freedom of expression in Egypt. It is not just related to books. TV shows and newspaper articles have become very biased and one-sided.

I know this is not a direct censorship, but a form of self-censorship by the heads of TV stations and newspapers fearing that they have overstepped their boundaries. Self-censorship was common during the Mubarak era and has increased tremendously now. This is a dangerous form of censorship because it conditions people to become complacent and dogmatic.

There is rampant hyper-nationalism, or pop-fascism as I prefer to call it, motivated primarily by fear and a survival instinct. People honestly believe that in order to survive and thrive they need to abandon human rights, accept oppression and even justify this process as a necessary step or a sacrifice for the country.

This hyper-nationalism was very widespread during the Nasser era, where the leader is elevated to a God-like status, a common attribute to the ‘cult of personality’, a defining characteristic of the Sisi era.

Egypt is primarily becoming an expanded cult, where people would sacrifice their family members for the illusion of patriotic duty.

Anyone who is not a follower of this cult is dehumanised, this is what we see now with the shura council verdicts and leading revolutionary figures.

Al Jazeera: You have documented the Egyptian revolution through the street art movement, what have you come away with from this experience?

Hamdy: We have documented three years of the revolution. The main thing we learned is that people are very powerful. The only way to repress people is to strip them of their belief that they have rights, or at least to convince them to temporarily abandon their rights for the greater good. Mubarak did that and declared an emergency law that lasted 30 years.

Al Jazeera: Some people said we will not be able to understand the Egyptian revolution unless we delve deep into the graffiti that covers the walls? Is this a view you relate to?

Hamdy: Yes. Graffiti is the unmediated voice of the people. Artists resorted to graffiti to reach people on the streets and to counter the state-controlled media that was spewing propaganda and lies attempting to regain control.

Every event was painted on the walls; I made it my mission to document every stroke and did not rely on my perspective alone but the perspective of 100 artists and 100 photographers. There are a lot of conflicting statements on the walls which reflect back on the debate that was happening in the country.

It is not a singular voice, it reflects the multiple points of view of the people and this is a healthy debate and we should be proud that we witnessed an era like this in Egypt.

Al Jazeera: Is there an Egyptian graffiti movement? How threatening could it be to the establishment?

Hamdy: I don’t think there is a movement any more. Many artists have given up and feel they are not supported. Some have immigrated or temporarily relocated.

Al Jazeera: Egyptian officials say the book copies were confiscated because ‘it instigates revolution’
How would you respond to this?

Hamdy: I find this statement paradoxical because it implies that revolution is a negative thing. President Sisi himself celebrates and believes in the January 25 revolution.

I do believe that there is a systematic attempt to modify history and collective memory pertaining to the revolution, not to directly deny it, although I did hear many people call it Egypt’s biggest setback.

But the revolution has been reduced to an empty shell.

Its main activists are in prison, its main mechanism – protest – punishable by law, its media voices like Bassem Youssef, Belal Fadl or Ramy Essam demonised, the perpetrators or figures responsible for killing protesters are all freed, one after the other. So there is nothing left but a name. I feel we are living in a farce! 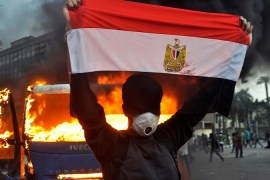 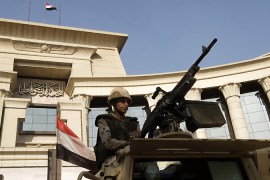 Who is the terrorist? Violence and power in Egypt after Morsi

Despite the July coup, the military’s position is not as strong as it seems given Egypt’s weak economy.