In his speech on countering violent extremism last week, US President Barack Obama drew a clear distinction between people who practice Islam – and those who “pervert” it.

Individuals are responsible for atrocities, Obama said, not religions.

“We have to make sure… that we do not stigmatise entire communities.”

There were no such conciliatory lines from Australia’s prime minister in his speech on national security on Monday.

Instead there was this from Tony Abbott: “I’ve often heard Western leaders describe Islam as a ‘religion of peace’ I wish more Muslim leaders would say that more often, and mean it.”

The implication was that not enough Muslim leaders describe Islam as peaceful, and that some of those who do don’t really mean it.

The line – and Abbott’s broader rhetoric – has alarmed many who feel the prime minister is putting down a “with us or against us” line; alienating the very people he most needs help from in his country’s fight against terrorism.

Lydia Shelly, a Muslim advocate and lawyer who Al Jazeera spoke with on Monday, described it as “dog-whistle politics”. Struggling in opinion polls, she says, Abbott has jumped on national security – and the implied threat of some Muslims to it – as an issue he thinks non-Muslim voters will rally behind.

Even before Monday’s speech, the prime minister was being criticised by Muslim leaders for being divisive. More than 100 people and groups put their names to a petition last week, condemning the “targeting of Muslims through [existing] abominable ‘anti-terror’ laws”.

More anti-terror laws are likely to come as a result of Monday’s speech. Dual-nationals could see their Australian citizenship stripped from them; others “involved in terrorism” could lose the “privileges” of citizenship – including welfare payments and consular support abroad.

Some, though, feel Muslims with no connection to terrorism will be caught up in the trawl.

The prime minister is unapologetic for measures he says are necessary to keep Australia safe. In his speech, he fleshed out why: the context of a growing ‘terror threat’ in Australia.

Tony Abbott revealed his security agencies were currently working on 400 “high-priority counter-terrorism investigations” – more than double the number of a year ago. 110 Australians, he said, have travelled to Iraq and Syria to fight with ISIL – and those that returned to Australia would pose a big threat. There were, the prime minister said, likely to be more attacks by individuals like that on a Sydney cafe in December.

“Today’s terrorism requires little more than a camera-phone, a knife and a victim,” he said.

The implication throughout the speech, though, was that one other ingredient was needed – inspiration from a (Muslim) ‘hate-preacher’ or from the rhetoric and ideology of the “Islamist death-cult” – Abbott’s name for ISIL.

Australia’s prime minister and the country’s most senior Muslim, the Grand Mufti Ibrahim Abu Mohammed, are already involved in a public spat; the latter said in an interview last week that he’d voted for Abbott in the past, but now regretted it. The prime minister should “work in any field other than politics” the Grand Mufti said.

Monday’s speech is unlikely to do much to repair the rift. 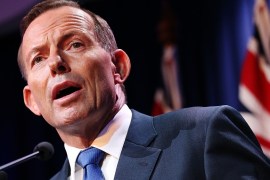 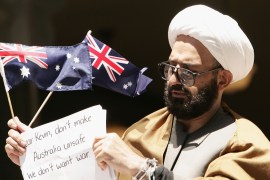