The drums have gone silent, the rallies have turned into door-to-door contact programmes, the singers the actors the magicians, the performers have all gone quiet, the stage is set. The loudspeakers have turned into whispers and if one hears the whispers clearly – right-wing ruling Bharatiya Janata Party (BJP) has a tough task on hands.

Last time around, during the 2013 Delhi state elections the setting was different, the grand old party of India, the Congress was fighting a 15-year anti-incumbency in the state and a decade at the centre. It was discredited, Prime Minister Narendra Modi’s BJP was on a roll and the anti-corruption Aam Aadmi Party (AAP) was seen as underdogs. The fight, then, was triangular in nature.

More than a year later, the battle lines are clearer: BJP and AAP (Common Man Party) are the main players vying for the winning slot as the Congress is largely confined to some pockets of influence.

When elections were announced for Delhi Assembly about two months back, BJP was the clear leader, basking in the glory of winning the May parliamentary elections decisively and all the subsequent state elections convincingly. Modi’s magic was working and he had clearly caught the imagination of the voters.

But 45 days of hectic campaigning has changed the picture. AAP has come back strongly and is now predicted as the front-runner by various opinion polls.

What changed it – clever political strategy of AAP and absence of the ubiquitous “angry vote”. AAP kept setting the agenda for the ruling BJP and the latter was forced to respond.

First the onslaught of AAP forced the BJP to abandon their strategy of projecting Modi as the sole leader backed by the collective leadership of the state.

The BJP was compelled to declare a chief ministerial candidate. Kiran Bedi, one of the first women officers in the Indian Police Service, was appointed as the party’s face – even though she was not a party member until three weeks ago.

The strategy of getting a former comrade of rival AAP leader Arvind Kejriwal did not work on expected lines as she failed to enthuse party workers. Shying away from the proposal of a televised debate did not help Ms Bedi’s cause either.

The “quitter” tag, which BJP put on “MufflerMan” Kejriwal (referring to the trademark woolen scarf draped around his head), failed to do the kind of damage they expected.

Secondly the “angry vote” – the 2014 general elections and subsequent state elections saw a huge number of disillusioned voters who wanted to get rid of the Congress at any cost. That vote was divided between the two (BJP & AAP) in Delhi. That vote is now absent; voters now have to make their choice differently.

“Delhi is different” says Prakash Singh, a 44 year old Delhi businessman. “Delhi is not Varanasi where Modi will come trumps; here Kejriwal will win. We do not want a leader with 56 inch chest, as Modi claimed for himself. We want a leader who will sweat it out for us.”

“Delhi wishes to be governed not ruled and we need a leader who understands that difference and believes in that,” Tiwari told Al Jazeera.

But is the battle for the heart of India all about these two faces or is it about the two parties?

On the basis of organisational strength, BJP is ahead of AAP.

Amit Shah, the president of BJP, has left nothing to chance, making sure that most of the members of parliament and ministers toil in the field. He has made sure that there are no dissenting voices and that the party’s election machinery works well.

AAP’s rise has been chaotic with screaming deserters, rebel candidates and rebel outfits. However, as its supporters say, that is the novelty. This new political outfit “makes leaders out of common men and replaces leaders by common men”.

So is the famed “Modi magic” fading then? This is Modi’s first real test. Everywhere else he has been fighting a discredited Congress party and the voter was so eager to “teach them (Congress) a lesson” that it flocked in hordes with the Modi juggernaut. Here in Delhi now, AAP is a real challenger and hence there is no case of TINA (There is No Alternative).

A walk through old Delhi’s Muslim quarters such as Chandni Chowk, Ballimaran, and Jamia Nagar, one sees a definite drift towards AAP.

“With a listless Congress and resurgent Hindu rightwing, minorities, including Christians and Muslims are veering towards the fresh politics of Kejriwal,” said Tanweer Alam.

One cannot, however, discount the so-called pro-development vote which did find resonance in Modi’s model of growth but it does come with a rider the communal undercurrent which makes the supporters a bit uneasy.

Shazia Ilmi former colleague of AAP founder Kejriwal and now a member of the rival BJP, told Al Jazeera that the AAP chief “lies and misleads, selling dreams which can not be realised”.

“He has avoided all the questions which we have been asking. He does not respond to the RTIs (right to information queries) which have questioned his plans. He will not be able to deliver,” Ilmi said.

Elections, however, are rarely about “delivery”, it is about promises and convincing people and that Kejriwal is doing well, as is evident from the latest opinions polls and surveys.

Ashish Khetan of AAP told Al Jazeera that they perceive themselves “as an idea of clean and honest politics”.

“That it is possible for an ordinary man, an ordinary woman, to come into politics because for the last 67 years, what had happened is that politics had become an exclusive club of the top one percent of the country,” says Khetan.

He further said, “I think now this kind of revival that Aam Aadmi Party has seen over the last few months further reinforces the idea, and further reaffirms our faith that electoral defeats and victories will not come in the way of the success of the idea of AAP, of the future prospects of the idea of AAP.”

The rival BJP dismisses the novelty of the anti-corruption party.

Nalin Kohli, official spokesperson of BJP, in an interview to Al Jazeera said, “The Aam Aadmi Party is essentially a media focused party. It is not really an agenda driven party, they don’t have any ideology or clarity about what they want to do. That is why you see them very supple, almost hypocritical with stands on issues.”

More than expected enthusiasm for this otherwise small election for one of the smaller states (which is not even a full-fledged state) is because many watchers are curious about how Modi and team will fare in the first real electoral test.

And this will also determine the fate of Kejriwal and AAP as they will find it difficult to be relevant if they have to struggle for another five years. But as mentioned above, ‘Delhi is different’ and the voters may have a different tune to sing.

Either way, the February 10 will resolve the curious case of the MufflerMan when the results are out. 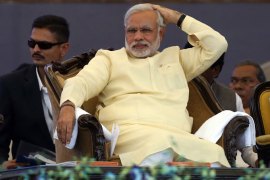 Huge relief for BJP and its prime ministerial candidate as court clears Modi of involvement in deadly 2002 riots. 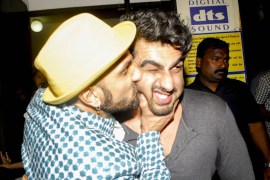