A revolutionary university programme hopes to change prospects for former prisoners and public attitudes to their rehabilitation.

We are in a university English class watching a lively debate about Macbeth. The enthusiasm of the visiting professor and the students is infectious.

We feel like we could be in any university across the United States. That is until the harsh crackle of a prison guard’s walkie-talkie cuts the ambience and reminds us that we are in fact in a medium-security prison in Otisville, NY.

Dressed in their green prison uniforms, inmates make up more than half of the class.

“There’s a quote in Macbeth,” says Matthew Wilson, “‘Time and the hour moves through the roughest day’. That’s like being in here. Time does move through even the roughest day.”

Wilson and his fellow inmates are taking part in a programme known as the Prison To College Pipeline, run by John Jay College of Criminal Justice in New York City.

The United States has the largest prison population in the world, with more than 1.57 million people behind bars in federal, state and county prisons. The US Bureau of Justice Statistics says that more than 75 percent of released prisoners are re-arrested within five years.

“The re-entry of prisoners into society is a massive crisis in this country,” says the programme’s director, Professor Baz Dreisinger. “We wanted to think about how higher education could specifically be at the centrepiece of a re-entry programme.”

Instead of creating a standard degree programme inside the prison, students on the Prison to College Pipeline start accruing credits while they are inside and complete their degree at one of the City University of New York campuses after they are released.

“This is the new me,” he tells us, “Prior to getting arrested, school wasn’t even an option. The easy way out was robbery and selling drugs. I don’t want my 13-year-old son to go through the same things I did.”

Wilson is also writing a screenplay with another former inmate on the programme, so the English classes are coming in handy.

“This is the first time I have read Macbeth,” he says, “Just seeing how Shakespeare formulates his play allows me to attempt my screenplay using the same structure; how to get the transitions from one scene to the next. I’m definitely picking up some skills.”

Those that run the Prison to College Pipeline programme insist it’s not all about the degree. Bianca Van Heydoorn works closely with the recently-released students.

“There’s something about that campus experience,” she says, “There’s the networking, connection with faculty and cultural events. So what we really want our students to get is this experience on campus that they can not get in prison… because it can be rough for those that transition.”

Robert Taitt is currently going through that transition. He’s on his third semester of an English major after being released from prison two years ago. He served 13 years, also for robbery.

“Re-entry was tough, but for me, the programme was something to look forward to. I had a place to go.” He is in no doubt about the impact the programme has had.

“It’s given me a new life. There are no words to say thank you to all the people who have helped me over the last two years.”

The programme is still only four years old and although John Jay is one of only a few US public university systems involved in prison education, tuition is paid for through private funding.

“It’s still sadly a very controversial thing to think about funding education for prisoners,” laments Dreisinger, “Which is ridiculous because it benefits everything, from public safety to human rights… but still there is this punitive culture that is not comfortable with this idea.”

“Most of the time prison education programmes tend to get defined in terms of recidivism rates. But I consider that setting the bar too low. It is exciting that a good number of students are well on the path to making a successful life for themselves professionally… and also personally.” 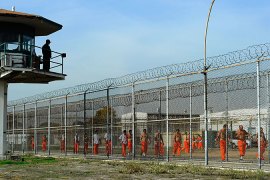 Why are so many Americans in prison?

We ask if the US should reconsider its ‘lock ’em up and throw away the key’ approach to crime and punishment.