Athens, Greece – At election rallies across Greece, the main opposition party – the Coalition of the Radical Left, or Syriza – promises to lead a European revolution against austerity.

“Millions of pairs of eyes have turned to Greece to see whether after five years of patience, of painful and unwavering efforts, Greece can lift its head. We will prove that when people are determined they can defeat even the greatest enemy,” declared Alexis Tsipras, Syriza’s leader, at a recent rally in the northern city of Komotini.

Tsipras’ supporters are a mix of traditional leftists and the newly dispossessed. The former see the prospect of Greece’s first ever left-wing government as a historic moment. The Greek communist party, KKE, lost a civil war 65 years ago in pursuit of this goal.

Syriza, which was formed in 1989 as an attempt to unite Greece’s fragmented communist groups, now represents the left’s best hope of achieving it.

The majority of Syriza’s supporters, however, are not dyed-in-the-wool ideologues.They are people such as Uzinel, a city bus driver who quit his job after his 1,200 euro [$1,390] monthly salary fell by half.

“Tsipras says he will restore minimum wage to 750 euros [$870]. That is decent.” Uzinel now supports his family by farming sugar cane and tomatoes.

Many Greeks are willing to admit the country’s $42bn deficit needed to be tamed, but five years of government spending cuts that finally balanced the budget last year also helped deprive Greece of a quarter of its economy, and produced unemployment of more than 25 percent.

Debt servicing cannot deprive the country of the valuable resources which are needed for social cohesion and growth.

In a controversial report published in May 2013 , the International Monetary Fund admitted it had greatly underestimated the recessionary effect of public spending cuts it ordered the Greeks to make.

Now that the government is finally raising more in taxes than it is spending, its new challenge is to meet scheduled debt repayments. That task is absorbing more than its hard-won surplus, forcing it to keep borrowing and keeping it in what Syriza’s chief economist, Yiannis Milios, calls an “austerity trap”.

Syriza’s main election promise is to renegotiate the terms under which Greece would repay $280bn to fellow Euro zone members and the International Monetary Fund to ease the period of adjustment. It wants its creditors to write off up to half of that debt and allow Greece to delay repayment of the rest until it enjoys healthy growth rates.

“We have always said that a debt servicing cannot deprive the country of the valuable resources which are needed for social cohesion and growth,” Milios told Al Jazeera. “And there are now many voices in Europe who agree with us … Deflation, recession, high unemployment are not only Greek problems. They are problems of all the European south, and they have started also being problems in the northern countries.”

Leftists – who formed the backbone of Greek resistance during Nazi occupation – are fond of reminding Germany it was effectively relieved of damage claims of countries it had fought and occupied in World War II, amounting to hundreds of billions of dollars.

“I think the so-called German economic wonder wouldn’t have taken place if this decision wasn’t made in the London conference of 1953,” said Milios.

Rebellion against the debt “trap” resounds with Greek voters, who now owe an unprecedented $200bn to banks, social security, and the taxman – a sum equal to the country’s entire output.

Not everyone is convinced that Syriza can pull off a successful negotiation with creditors. Anger at the recession is mixed with fear that the country’s fragile recovery may become derailed.

Going against the majority

“I don’t trust them. Are we just going to wake up the day after the election and find that all our problems have been solved? I don’t think so,” said Popi Giouzelidou, a clothes shop owner on Komotini’s main square. “Where are they going to find the money? And why didn’t they work with the conservatives as a national unity government? I think they just want power.”

Strictly speaking, Syriza is not winning this election, rather it is the incumbent coalition of conservatives and socialists that is losing it. Syriza’s current approval rating of about 30 percent is only marginally greater than what voters gave it in the last general election, two-and-a-half years ago. The ruling New Democracy and Pasok parties, however, have together lost roughly 10 percent of the vote. Under Greece’s election law, that would deprive them of a 50-seat bonus in parliament awarded to the top party.

Syriza has already gone against the majority in triggering this election. By refusing to back the government’s candidate for president, which requires bipartisan support, it invoked a constitutional dissolution of parliament last December. Public opinion, as expressed in recent polls, favoured continuity and political consensus.

Before the 2012 elections, Syriza had again gone against majority opinion by openly threatening to unilaterally stop debt repayment, forcing Greece to leave the Euro zone with potentially ruinous results for the currency. More than two-thirds of Greeks have consistently polled as favouring the euro over a return to the drachma.

While Syriza is now careful to back a negotiated rescheduling of debt, its strategy still hinges on leveraging Greece’s nuisance value. Its argument now is that denying the Greeks satisfaction would be politically incorrect.

“You’re worried that if a Syriza government comes along … the almighty Germans or whoever else will chop off our head, stick it on a pike and carry it around saying ‘here’s what happens to people who vote for Syriza’,” Yiannis Dragasakis, a Syriza MP and a member of the party’s economic policy-making team,  recently told a panel of fellow-economists.

“Does anyone believe that such a Europe has any kind of future?”

Syriza faces a difficult negotiation. Creditors have frozen $8.8bn in loan disbursements until Greece completes its negotiation, and the current government has exhausted a $17.4bn ceiling of bond sales under its oversight programme. A Syriza government’s only source of revenue, therefore, will be taxes. But public tax revenues collapsed in the last three months of 2014, cutting a projected $7bn primary surplus by two-thirds.

Euro zone finance ministers are preparing to extend the negotiation deadline by six months to September. Such a prolonged negotiation would amount to a siege. Senior banking sources told Al Jazeera that Greece only has cash reserves to service the debt, pay public servants and shore up the pension system through February.

“The cash reserves are definitely until the end of March and in addition there are many options that the Greek state can use to have another two to three months without any real problem,” insisted Syriza MP Yiorgos Stathakis, an economics professor widely thought to be in line for the crucial finance portfolio.

“At any rate, as soon as we form the government I think political stability will improve the performance of tax receipts.”

Even if a Syriza government manages to draw out talks to the deadline, it is highly unlikely to be able to make good on $12bn in social spending it has promised. Stathakis, who is the most moderate of Syriza’s economic policymakers, said the party would implement at least a $2bn portion of the programme that would provide food, electricity and healthcare for the poorest Greeks.

“The Greek programme has failed completely,” he said. “We have to go back to the table, find a new solution with our partners. That’s the only way.” 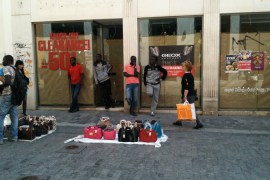 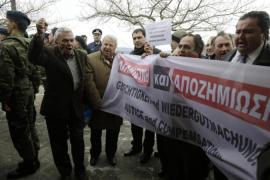 Struggling through a continued economic downturn, Greece has reopened the debate on German reparations. 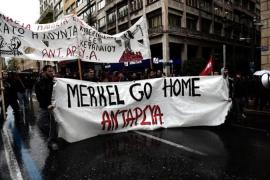