Thailand’s political scene looks set for a new round of unrest after the country’s Constitutional Court ordered caretaker Prime Minister Yingluck Shinawatra out of office on Wednesday, six months after a wave of violent demonstrations demanding her resignation took place.

It was the third time that the court had removed an elected Thai leader with ties to former Prime Minister Thaksin Shinawatra, Yingluck’s billionaire brother, who was expelled from power in a bloodless 2006 coup.

Critics have accused Thaksin of using Yingluck and other former prime ministers as his proxy, while he pulls the political strings from exile in Dubai.

The court’s decision is the latest event in a long-running power struggle between the traditional political elite and their middle- and upper-class base in the capital Bangkok and Thaksin’s so-called Red Shirt supporters – mostly rural villagers living in impoverished areas in the country’s north and northeast.

The Red Shirts and their political organisation – the United Front for Democracy Against Dictatorship – could mobilise in large numbers to protest against the court’s decision, as they did in 2010 when they took over Bangkok’s central business district for months, before the military launched a bloody crackdown.

They announced on Thursday that they were preparing mass rallies to take place over the weekend.

For their part, Yingluck’s opponents said they would stage a “final offensive” on Thursday to remove her allies still in power.

“The standoff looks set to continue, with extremely negative implications for the economy.”

The Shinawatra clan enjoys the support of the majority of Thais, who have overwhelmingly voted their political parties into power in every election since 2001.

A new vote is expected in late July – one that would in all likelihood return a government made up of Thaksin allies.

Thitinan Pongsudhirak, director of the Institute of Security and International Studies at Chulalongkorn University, said it was crucial for an election to take place.

“The only way out and the ultimate way forward in this flawed electoral democracy is still to stick to the popular mandate as the least problematic of all options,” he said.

“An unelected outcome is likely to bring more tumult and turmoil.”

Thursday’s ruling was not the first time the Constitutional Court had waded into Thailand’s murky political waters. Other prime ministers linked to Thaksin and removed by the court include Samak Sundaravej and Thaksin’s brother-in-law Somchai Wongsawat.

Two political parties with Thaksin ties – Thai Rak Thai and People’s Power Party – have also been banned by the court.

In a nationally televised address, Constitutional Court Judge Jaroon Intachan said Yingluck “committed what is prohibited in the constitution” by transferring a senior civil servant in the National Security Council three years ago to an inactive post.

Yingluck said she was not guilty of any wrongdoing. “I insist that we used honesty to administer the country, and we have never done anything that conveyed any dishonest action as accused,” she said.

Yingluck, 46, was Thailand’s youngest prime minister and its first female leader. She served exactly 1,000 days in office. Niwatthamrong Boonsongphaisan, the commerce minister, takes over from Yingluck as caretaker prime minister.

A member of Yingluck’s Pheu Thai party challenged the court’s decision to remove her.

“The party has been supporting democracy in the country, but there is a group of people and institutions that have been working systematically to destroy it,” Bhokin Bhalukula, Pheu Thai’s legal adviser, said.

“The court has disbanded two parties and removed three elected prime ministers, including Yingluck Shinawatra. We call for the caretaker government and the Election Commission to keep working to hold the election on July 20.”

The reaction was very different from people on the other side of the political divide.

“She has never shown any responsibility as a prime minister,” said Thanida Yuthanet, 45, who had participated in anti-government demonstrations. “She should have left a long time ago.”

Violence over the past six months has killed at least 23 people and injured hundreds.

While there are fears the court ruling could intensify the political crisis, some pundits say the time could also be ripe for political reconciliation.

Kriengsak Chareonwongsak is a senior fellow at Harvard University and former adviser to Thai prime ministers from both sides of the political divide.

He says that while the court ruling leaves the country in a “political vacuum”, it could nevertheless bring the rival sides together for the common good of the country.

“You can’t eliminate a very powerful side without giving it some standing room,” Kriengsak told Al Jazeera.

“All of this is setting the scene for negotiation.”

“I think there will come a time when both sides will come together to find a way out and an amicable solution that is acceptable to both parties,” Supong said.

“I’m quite optimistic. In the past both sides were overconfident. … This time the rhetoric will be toned down, and they’re willing to speak right now.”

Kriengsak noted that Thailand is awaiting another ruling by the National Anti-Corruption Commission over the government’s much-criticised rice subsidy programme, which benefited farmers but has been linked to corruption.

Once the world’s largest rice exporter, the subsidy cost Thailand billions of dollars.

“It seems a verdict is coming against the government, and that will knock out the remaining cabinet members. It will be a final blow to this government,” Kriengsak said, referring to the impending ruling.

He says government supporters would probably protest, but it remains to be seen how significant their numbers will be.

“The government’s rallying power will be tested now,” Kriengsak said.

“There will be some reaction, no doubt. Part of the Red Shirts will come forward, but some parts will not. The government has had a hard time rallying the Red Shirts in recent months. This is the most pivotal testing ground, and we’ll see over the next few days how it plays out.”

Biswas of IHS says Thailand’s economy is suffering heavily due to the political turbulence, and could be further affected if demonstrations erupt and violence breaks out again.

He said GDP growth is expected to be just 1.9 percent in 2014, far below the nation’s potential annual growth rate of 4-5 percent.

The political turmoil is estimated to have cost the Thai economy between $8bn and $10bn in lost GDP growth this year, Biswas said.

“The tourism sector, which plays a key role in the economy, was hit badly in early 2014 due to political protests and incidents of violence in Bangkok. Foreign investors are also increasingly concerned about the impact on the Thai economy,” he said.

Concerns have also been voiced that the planned July 20 election may be shelved.

The anti-Thaksin People’s Democratic Reform Committee (PDRC), the spearhead of the protests against Yingluck’s government, has demanded electoral reform before any new vote, and its ally, the main opposition Democrat Party, boycotted a parliamentary election won by Pheu Thai in February.

That election was later annulled by the same Constitutional Court which ruled against Yingluck on Wednesday.

Thitinan, the Bangkok-based political analyst, says what remains to be seen is whether the anti-Thaksin movement “packs up after Yingluck’s political demise”, and whether the Democrat Party agrees to participate in the July vote.

“If the PDRC maintains its line and logic of not allowing an election until its reforms are enacted, then we will have more crises and confrontation,” he told Al Jazeera.

“With the election at a dead end, the temptation for a non-elected outcome will grow. This option would raise political risks immeasurably.” 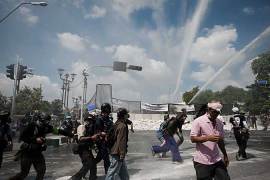 Protesters say the government’s economic policy threatens their future, but unrest may scare tourists away. 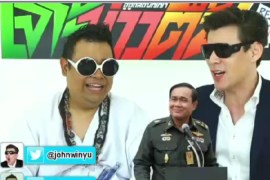 ‘News in Depth’ has attracted hundreds of thousands of viewers and aims to lighten the mood amid political unrest.