Qalamoun, Syria – In a tiny village perched in the folds of one of Syria’s highest mountains, a rebel commander sits behind the steering wheel of his parked pick-up truck, listening for the first time to an anthem created by his enemies vowing to give him and his comrades “dark days”.

Safwan Ouda had covered his vehicle with mud to camouflage it from the fighter jets of Syrian President Bashar al-Assad’s air force. His village, Flita, was once mostly known for its drug trade, but is now at the centre of a decisive battle in this juncture of the Syrian conflict.

It lies on a supply route between Lebanon and Yabroud, the largest rebel stronghold in the Qalamoun mountains.

Ouda and his battalion have found themselves at the heart of a conflict that has taken on broader regional and sectarian dimensions. The Sunni village is facing an onslaught from Assad’s troops backed by fighters from the Lebanese Shia group Hezbollah – and its propaganda machine.

“Beware, the army of terrorists, the time of defeat has passed. We destroyed the army of Jews, now it’s your time in Yabroud,” booms the bombastic anthem, created by a Hezbollah supporter, from Ouda’s smartphone.

The 29-year-old former military officer, who defected from the army in 2012, placed his hand under his bearded chin as he listened attentively, then calmly said: “The song is a pathetic attempt to raise their crushed morale.”

The song, “Seal Your Victory in Yabroud” , has gone viral on social media. It was released to coincide with the beginning of the Syrian army’s offensive to take over the remaining rebel-held areas in the Qalamoun mountains, positioned strategically between Damascus and Homs.

But three weeks ago, when regime troops tried to advance into Flita, dozens of rebel fighters fended off the soldiers by mounting a Concours anti-tank missile launcher on a hill and firing at them. No subsequent ground offensives were attempted.

Flita’s altitude – more than 2,000 metres above sea level – and its rough terrain and rock shelters have provided a natural fortification for the rebels from artillery shelling and air strikes.

“If the US was humiliated and got lost in Tora Bora, how can the Syrian regime win here?” Ouda asked, referring to a battle in similar terrain during the war in Afghanistan.

A fighter jet circling over the village dropped a bomb as Ouda spoke. It disappeared behind the endless chain of rugged mountains. The sound of a 23mm anti-aircraft gun rang out behind him as rebels tried, unsuccessfully, to shoot down the aircraft. Ouda claimed his fighters wrecked three planes over Flita in just one week.

The rebels’ resistance in Flita came as a surprise both to the regime and the opposition fighters elsewhere in Qalamoun who did not count on Flita to put up much of a defence. The village, which was a hub for drug production, had been largely spared the violence that has gripped the country in the past three years.

The drug lords here had an interest in maintaining stability, to sustain their business of supplying the locally-manufactured amphetamine stimulant Captagon in the form of tablets across Syria – and to other countries in the region.

The Syrian government had given drug dealers in the village a free ride during the conflict in return for their loyalty, Al Jazeera was told.

But loyalties were tested last month when rebels consolidated their grip on Flita.

The rebel fighters executed several drug dealers who were believed to be collaborators with Assad’s administration, prompting those remaining to flee to neighbouring Lebanon.

One of those who fled across the border was Abu Abbas, a notorious drug lord who had been jailed and sentenced to death in 2007 – but was released by the government after the uprising began in 2011, in a bid to have him quell dissent in the strategic border village.

Abu Abbas’ lavish home built from cream-coloured stone stands out among the simple concrete buildings that characterise Flita. The three-storey building’s basement had once been used as a facility to produce Captagon, but rebels now use the generator there to light nearby houses, which had been cut off from electricity for the previous two months.

After three weeks of violence, every corner of the village bears the hallmarks of war. Windows of houses, overlooking the picturesque green plains embellished by cherry trees, are shattered. Shells have pierced several buildings two kilometres from the front line, and the rocky, unpaved roads in the village are filled with rubble. Dozens of mud-covered pick-up trucks used by rebels crowd the narrow streets.

It took just days for most of the village’s 12,000 residents to become refugees, living in small stone huts in the no-man’s-land between Lebanon and Syria, or in tents and makeshift shelters in the Lebanese town of Arsal.

Ramez, in his early 60s, was just about the only civilian that could be seen in the street by sunset on the day Al Jazeera visited the village. His wife and daughters fled to Arsal, while his sons have moved to central Damascus. But Ramez does not want to leave his home unattended.

“A lot of people do not have the heart to leave their homes even though the situation here is really bad,” said Ramez, wearing a black leather jacket over his grey traditional robe.

“There is no electricity, and no flour for bread. We travel to Arsal every day to get our basic goods.”

Arsal is only a few kilometres away, but the road is rough and can get dangerous, especially amid increasingly frequent air strikes by the Syrian air force on the mountainous border area.

Nonetheless, many Syrians travel back and forth between Arsal and Flita to check on their homes and bring food to those remaining in the village.

Abu Abdo, a native of Flita whose family has settled in Arsal, carries fuel in his truck to the rebels of his home village. He said he paid for it out of his own pocket.

Dig your grave in Yabroud. Your dream of victory in Yabroud is an illusion.

“We are now refugees and we barely have enough money, but we must help the revolutionaries,” he said. “I don’t want to see Hezbollah occupy my village the way they did in Qusair.”

The Syrian town of Qusair, near the border with Lebanon, was captured in June 2013 by government troops backed by Hezbollah, following weeks of intense fighting. It was a huge symbolic loss for the rebels that made international media headlines.

“Oh resistance fighter, God is with you, and Qusair witnessed that,” boasts the anthem praising Hezbollah. As Ouda continued to listen to the provocative lyrics, he became visibly annoyed.

Sitting in the passenger seat, his friend quickly grabbed the phone and changed the song to a counter-version, created by opposition activists.

“Dig your grave in Yabroud,” the alternative warns Hezbollah. “Your dream of victory in Yabroud is an illusion.”

Ouda smiled widely. “I like this,” he said. “I will transmit it through my walkie-talkie so that fighters can enjoy listening to it. Yabroud is, God-willing, the grave of Hezbollah.” 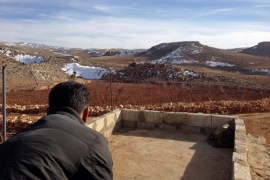 The border town of Arsal supports Syria’s rebels and fears encirclement by troops loyal to Assad and Hezbollah.