There was no imagining the immensity of Haiyan. Calling it a “super typhoon” failed to express it adequately. Even the shocking numbers – sustained winds of more than 300 kpm – didn’t provide a requisite sense of doom.

It was just another storm. That’s how many people were treating it. Sure the government issued warnings. Of course, people in coastal areas were being evacuated. Relief goods were being prepared, and first-responders were put in place ahead of time. But there was truly no preparing for what was about to happen.

The view from the air afterward was enough to leave you breathless. Hectares of broken land where farms and villages once stood. Cities crumpled into piles of debris. It was like a giant whip from the heavens had come down to strike a celestial blow across entire islands in the Central Philippines.

I was told the sound of the roaring winds was deafening. It shook people to their core. It was so loud there was nothing else but the seemingly interminable howling.

Then it was over. And there was only silence.

But none of this was clear – for months. In fact, in the first few days after the storm – nothing was clear at all. Communication with anyone in the affected areas was nearly non-existent. People didn’t know if their relatives were dead or alive. Even the first-responders who had been put in place to help out once the storm had passed became victims.

Then, there was chaos. With no food nor water, people took to looting to survive. Inmates had broken out of damaged prisons and instilled even more fear in already anxious evacuation sites. Rumours were rampant that communist rebels were holding up aid trucks and that martial law would be installed. It was the worst of times.

“No matter where I go – I will never forget that tragedy,” she said. “Everything – gone. Our house – gone. Not one thing remained.” She said her husband still can’t talk about it. “My poor grandchildren, their faces were turning yellow from not eating.”

Stories of hopelessness and nightmares 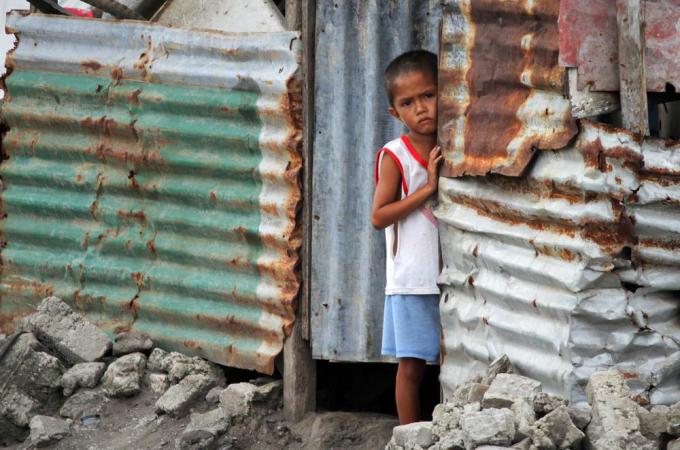 Everyone here has a similar story to tell – of survival. Of hopelessness. Of nightmares that haven’t gone away.

Juanita Golong’s nightmare has only got worse. She lives in another temporary shelter site for a fishing community. It is far away from shore and any means of livelihood for fishermen and women.

Her husband Alfonso would have to travel to the coast and camp out there for days so he could go out to fish and try to earn a living. But fishing is now unsafe in the hazardous waters of the bay – there is so much debris from the storm still in it that there’s barely any fish left.

Yes – one year on and the waters near the shoreline have yet to be cleared. But officials say they will get to it… eventually. It isn’t an “immediate concern” according to Alfred Romualdez, the mayor of Tacloban. He’d like to see the city further urbanised. And the fishermen be made to find other ways to earn a living.

There’s a government slogan for the rehabilitation work: Build Back Better. Many here see it as the punchline to an old joke. Coordination on the ground seems haphazard at best. NGOs have pointed out that things are disorganised and that there doesn’t seem to be an overview.

But the sounds of development are back. There’s traffic on the streets. In Tacloban city, aid workers are everywhere. Many here will tell you it’s buzzing more now than it did before the storm. Bars, spas, hotels, restaurants serving international cuisine – all catering to a large crowd of visitors who are here to help them rebuild. They are more visible on the ground locals say than any government workers.

In the shadow of that though, the emotional wounds have yet to heal.

In a cemetery on the outskirts of the city, some 3,000 white wooden crosses stand at the base of a mountain like stoic soldiers in formation. They mark the graves of Haiyan’s unidentified victims.

DNA taken from each one and filed away should relatives come looking. But many of the crosses now have names on them – scribbled by people who never found their missing loved ones.

“The body doesn’t matter now,” Lynette de la Cruz said. She never found her mother and two other family members. “What’s important is that we remember. We remember.”

And finally, de la Cruz said, she could feel a semblance of peace.