Malala Yousafzai, the Pakistani schoolgirl shot in the head by the Pakistani Taliban for advocating girls’ right to education, has received the Nobel Peace Prize, sharing her award with Kailash Satyarthi, an Indian child rights campaigner.

The two were handed the award on Wednesday at a ceremony in Norway’s capital, Oslo.

“A young girl and a somewhat older man, one from Pakistan and one from India, one Muslim, the other Hindu; both symbols of what the world needs: more unity. Fraternity between the nations!” Thorbjoern Jagland, chairman of the Norwegian Nobel committee, said at the ceremony.

Malala, 17, became a global icon after she was shot and nearly killed by the Pakistani Taliban in October 2012 for insisting that girls had a right to an education.

Malala has already been honoured with a host of awards, standing ovations and plaudits everywhere from the UN to Buckingham Palace.

Satyarthi, 60, was recognised by the Nobel committee for a 35-year battle to free thousands of children from virtual slave labour.

“I refuse to accept that the world is so poor, when just one week of global military expenditure is enough to bring all of our children into classrooms,” he said after receiving the prize.

On the eve of the ceremony, Malala said she would not rest on her laurels, saying she would like one day to become prime minister in her native Pakistan.

“If I can serve my country best through politics and through becoming a prime minister then I would definitely choose that,” she told the BBC.

Before the ceremony, Malala met 7,000 Norwegian children aged between six and 14 in the heart of Oslo.

“You have given me so much energy. It’s more than a Red Bull!” Malala said.

Speaking in Oslo on Tuesday, Malala said that in many parts of the world children’s requirements are infinitely more modest than an “iPad or computer”.

“What they are asking for is just a book, just a pen, so why can’t we do that?” 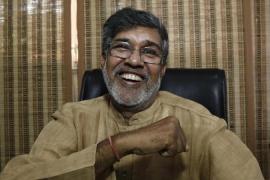 Activist has freed tens of thousands of Indian children forced into slavery. 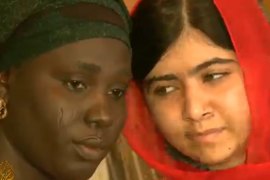 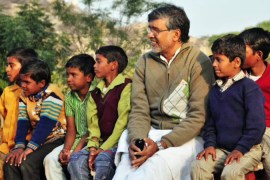 Kailash Satyarthi and his NGO have have freed more than 80,000 children from bonded labour in the past 30 years.