When Tunisian authorities released the only suspect arrested in connection to the deadly attack on the US embassy in Benghazi in 2012, it provoked a muted response from Washington.

Now, Ali Harzi is wanted in connection to the assassinations of two Tunisian opposition politicians, Chokri Belaid and Mohamed Brahimi, and he remains at large.

Harzi is not the only high-profile suspect linked to allegations of violence who has managed to slip through the fingers of the Tunisian authorities, leading to questions both inside and outside the country about the government’s handling of growing insecurity.

The list of suspects charged with both killings includes people with well-established links to al-Qaeda, and to the Tunisian branch of Ansar al-Sharia, which was allegedly responsible for the September 14, 2012 attack on the US Embassy in Tunis.

Last year’s attacks on the US embassies in Tunis, Cairo and Sana’a followed the September 11, 2012 killing of US Ambassador Christopher Stevens and three other Americans in Benghazi. US authorities are still working to determine whether there is any link.

In his first interview with foreign media immediately after the Benghazi attack, Libyan President Mohamed al-Magarief had told Al Jazeera that he suspected it was a pre-planned operation by al-Qaeda.

Harzi had been apprehended by Turkish authorities in Istanbul in October 2012, based on US intelligence, and was sent back to Tunisia.

Ali Laarayedh, interior minister at the time and current prime minister, said shortly after the extradition that Harzi was “strongly suspected” of involvement in the September 11, 2012 attack in Benghazi that killed Ambassador Stevens and his three US Embassy staff.

Harzi’s brother is reportedly linked to al-Qaeda in Iraq, and Harzi caught the attention of those investigating Benghazi after he posted details of the attack on social media.

After being held for three months and interrogated in the presence of FBI officers, Harzi was released on January 8. The Tunisian authorities said there was not enough evidence obtained from Libyan officials to keep him in prison.

Harzi was charged with belonging to a terrorist organisation – a charge that normally carries a sentence of six to 12 years – and his release was conditional on him remaining in the vicinity of the capital.

Harzi’s lawyer claimed his client was being used as a scapegoat to appease the Americans.

Former US secretary of state Hillary Clinton told the US Senate and House committees on Benghazi on January 23 that Harzi’s release was not coordinated with the US ahead of time. She said, however, that then Tunisian prime minister Hamadi Jebali had assured her that Harzi was “under the monitoring of the court”.

Republicans condemned the Obama administration for “allowing” the release, calling for it to suspend US aid – the US has granted Tunisia $320mn since 2011 – on the grounds the Tunisian government was “undermining US national security”. They questioned the “willingness” of Tunisian and Libyan authorities to cooperate with US investigators.

The Tunisian branch of Ansar al-Sharia, meanwhile, criticised Tunisian authorities for having granted the FBI access to Harzi, and published images purportedly of the American officials. Upon Harzi’s release, Ansar al-Sharia posted a video of him on Facebook.

Belaid was shot on February 6, 2013, a month after Harzi had been released [CLICK HERE TO READ ABOUT THE INVESTIGATION INTO HIS ASSASSINATION].

Harzi was named as a leading suspect in both killings at a press conference given by Tunisian interior minister Lotfi Ben Jeddou the day after Brahimi was assassinated on July 26.

The Ennahdha-led coalition government has faced serious criticism from opposition politicians and activists, who say the appeasement of a minority of Salafists has allowed for violence to spiral out of control.

The leading suspects named by the government in connection to both shootings are well-known jihadist-Salafists with a history of violence. The government’s critics are dubious about how such high-profile suspects have repeatedly managed to slip through the fingers of the security forces.

On August 28, the government declared the al-Qaeda-linked Ansar al-Sharia a terrorist organisation, saying its members were responsible for the assassinations. They are thought to be associated with the armed groups that killed eight soldiers in the Mount Chaambi region near the Algerian border on July 29.

A string of arrests followed. The interior ministry said on Monday that Mohamed Aouadi, second-in-charge of the group, had been captured near the capital.

Saif Allah Bin Hussein, known by the pseudonym of Abou Iyadh al-Tunisi, co-founded the Tunisian branch of Ansar al-Sharia in April 2011. He had previously co-founded the al-Qaeda affiliated Tunisian Fighting Group before he was apprehended in 2003.

He was linked with the assassination of the Northern Alliance leader, Ahmad Shah Masoud, two days before September 11, 2001.

Abou Iyadh was serving a 40-year prison term in Tunisia, but was among the 2,000 Salafists who benefited from a blanket prison release shortly after the 2011 uprising.

“His links with al-Qaeda are longstanding and well-established,” said Andrew Lebovich, an analyst focusing on political and security affairs in North Africa.

Security forces abandoned their first effort to arrest him at his home on September 14, 2012, after he challenged them about their lack of a legal summons.His group was the cause of considerable concern for Tunisian liberals, but Ennahdha’s position was that such groups should be given freedom in post-revolutionary Tunisia.

Abou Iyadh became a wanted man again following the attack on the US embassy in Tunis in September 2012. Yet even following that attack, the Ansar al-Sharia co-leader has shown a remarkable ability to evade arrest.

Days later, he went ahead with a fiery sermon at a mosque in central Tunis. In his speech, Abu Iyadh mocked Laarayedh, calling him a “burden” on Ennahdha. The mosque was surrounded by police, who then backed off, allowing him to pull a disappearing act. Laarayedh had given the security forces the order to withdraw.

The interior ministry told Al Jazeera it has had to tread carefully to avoid violence.

“He was able to escape because there were fears of triggering violence. He’s been pursued [by Tunisian authorities] since that time,” said the interior ministry’s Lotfi Hidouri.

Boubaker El Hakim, another Salafi jihadist of international repute, escaped an arrest attempt only days before he was allegedly involved in Brahimi’s killing, and he also remains at large.

The interior ministry’s Hidouri said the security forces had done their best against the highly organised group.

“There were members of his organisation who had informants inside the neighbourhood who were on watch and able to alert him that the special forces were coming to arrest him,” he said.

One of these informants had been living opposite Brahimi’s house and had passed information onto the gunmen, he added, saying that individual has now been arrested.

El Hakim had previously been involved in the recruitment and logistical organisation of aspiring French jihadists to fight in Iraq, and has spent time in French prisons.

Kamel Gadhgadhi, who allegedly shot the gun that killed Belaid, also remains at large. Gadhgadhi is also suspected of having connections to arms smugglers, and is accused of having killed at least one of the soldiers in Mount Chaambi.

Laryssa Chomiak, a political scientist and director of the Centre d’Études Mahgrébines in Tunis, said Ennahdha had made clear efforts to distance itself from ultra-conservative groups inspired by Salafism since the September 2012 embassy attack.

“At the time of the attacks on the US Embassy, the relations between these groups and the ruling party was much more ambiguous than it is now,” she said.

Chomiak said authorities have struggled to arrest suspects wanted in connection with violence because of the difficulty investigating such crimes, as the judicial system is awaiting necessary reforms.

Ali Harzi was released, she said, partly because of a genuine lack of proof, and partly for political reasons, since the ruling coalition did not want to risk alienating ultra-conservative allies.

Ties to the Salafis

In June 2012, a speaker at a Salafist rally in the coastal town of Zarzis had called Belaid, along with Nejib Chabbi, the leader of another secularist political party, “non-believers”.

“We call for the heads of Chokri Belaid and Nejib Chebbi,” the speaker said.

Aaron Zeilin, an expert on jihadist groups and a fellow at the Washington Institute for Near East Policy, said Ennahdha had had taken a misguided policy in their approach to them.

“I think that they [Ennahdha] … believed that if they crackdown hard on them [Salafist groups] that these individuals would become radicalised and violent,” he said. “The problem is that they didn’t put any pressure on them at all, and therefore gave them a free reign.”

He did say there were definite relationships between at least some individuals belonging to Ennahdha and to Ansar al-Sharia, but whether that meant there was any links to the violence was less certain.

“How far down that rabbit hole goes, and if there’s any actual links between people in positions of power and these individuals who carried out the killings [of Belaid and Brahimi], I don’t know,” Zeilin said.

Amna Guellali, Human Rights Watch’s researcher on Tunisia and Algeria, said the security forces’ mishandling of the investigations is the fault of the ruling coalition, but also because of a lack of reform.

“There hasn’t been a comprehensive reform of security forces … and there’s no transparency,” she said. 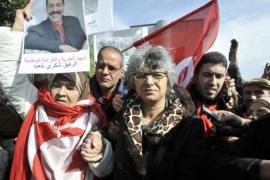 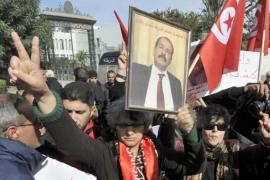 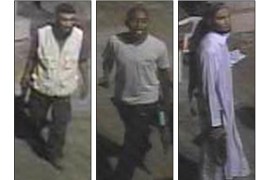 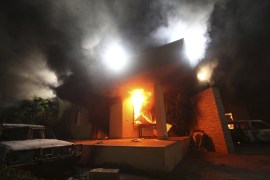 Obama administration releases over 100 pages of emails related to attack on US mission in Libya that killed its envoy.