The attack was the second by Israel on targets in Syria in 48 hours, signaling a sharp escalation of Israeli involvement in Syria’s bloody civil war.

Israel has said it wants to stay out of the conflict, but could be drawn in further as it tries to bolster deterrence and prevent sophisticated weapons from reaching Hezbollah.

Raids on Syria by Israel – which commands one of the most advanced militaries in the world and is backed by the US – have not yet elicited a military response from Syria, or its allies in Iran and Hezbollah.

Below are details of the four most recent Israeli attacks on Syria:

An amateur video showed a huge ball of fire lighting up the night sky in the Qudssaya area of Damascus governorate. Area residents say the “unprecedented” blasts at Jamraya felt like “an earthquake”.

Activists said the strikes hit a Fourth Armoured Division camp on Qasioun Mountain, including an arms depot, as well as a Republican Guard camp at Wadi Barada.

Explosions were also reported in the suburb of As-Saboura, to the west of Damascus.

The strikes targeted what was believed to be a shipment of highly accurate, Iranian-made guided missiles reportedly on their way to Lebanon’s Hezbollah group, according to a Western intelligence source quoted by Reuters.

A senior Israeli source said Israel carried out another airstrike near Damascus airport.

“The new Israeli attack is an attempt to raise the morale of the terrorist groups which have been reeling from strikes by our noble army,” Syrian television said.

Israel’s military later deployed the Iron Dome rocket defence system in the north of the country.

The Israeli raids were strongly condemned by Egypt as a “violation” of international law, while the Cairo-based Arab League demanded UN Security Council intervention to stop further Israeli attacks.

Israeli officials said that their aircraft had targeted advanced “game-changing” surface-to-surface missiles in Syria that were apparently bound for Hezbollah.

But Israeli officials do not say where in Syria the Israeli aircraft struck or whether they attacked from Lebanese, Syrian or Israeli airspace.

US officials said the airstrike hit a warehouse, but gave no other details.

The May 3 strike also followed days of renewed concerns that Syria might be using chemical weapons against opposition forces.

The Syrian government said it had no information on an Israeli attack, while Hezbollah and the Israeli military spokesman’s office declined comment.

The missiles allegedly destroyed were believed to be m600s, a Syrian version of Iran’s Fatah-110 missile – which an unnamed Israeli official said was an extremely accurate guided missile capable of traveling roughly 300km with a half-tonne warhead.

Some Israeli analysts say the shipment included Scud Ds, with a range of around 600km.

US President Barack Obama said, following the incident, that it was up to Israel to confirm or deny any strikes, but that the US co-ordinated very closely with Israel on military matters.

“The Israelis, justifiably, have to guard against the transfer of advanced weaponry to terrorist organisations like Hezbollah,” Obama told the Spanish-language TV station Telemundo.

Hezbollah has reportedly restocked its arsenal with tens of thousands of rockets and missiles since a 2006 war with Israel ended in a stalemate.

These are believed to include anti-aircraft missiles, which could hamper Israel’s ability to operate in Lebanese skies, and advanced Yakhont missiles that could be used to attack naval ships from the coast.

Hezbollah has not obtained any of Syria’s reportedly large chemical weapons arsenal and is not interested in such weapons, Israeli defence official Amos Gilad said.

In a warning to Israel earlier in the week, Hezbollah chief Hassan Nasrallah had said his militia was “ready and has its hand on the trigger” in the event of an Israeli attack.

He also said he would not “allow Syria to fall into the hands of America or Israel”.

The Israeli military, meanwhile, called up several thousand reservists for what it called a “surprise” military exercise on its border with Lebanon.

An Israeli raid targeted an alleged weapons convoy travelling northwest of Damascus towards the border with Lebanon. The vehicles were believed to have been transporting SA-17 anti-aircraft missiles to Syrian ally Hezbollah.

Secondary explosions during the same attack allegedly damaged munitions being stored at the Scientific Studies and Research Centre in the Damascus suburb of Jamraya.

The centre was believed to be the main development location for biological and chemical weapons in Syria.

Syrian military officials said the research centre, and not the convoy, was the target. Yet rebel groups say they had fired mortars towards the centre.

Ten Israeli jets flew from Ramat David Airbase to the Mediterranean, then over Lebanon, and several entered Syrian airspace before firing eight missiles at their target and then flying back over the sea. 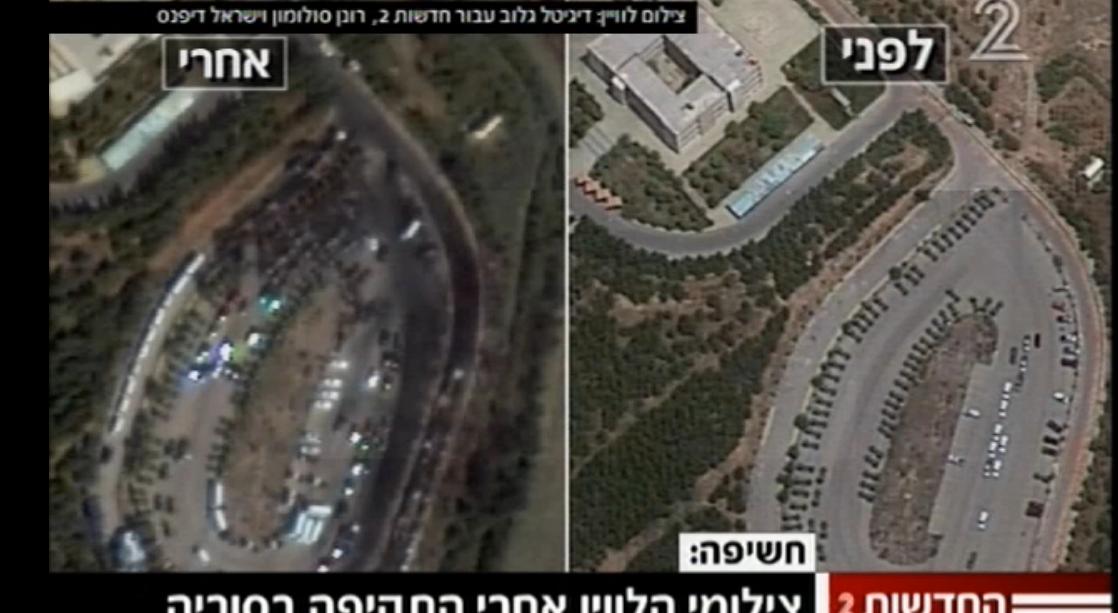 A still image from video on Israeli television shows damage done to a parking lot, while the buildings appear to have been largely left intact [Channel 2/DigitalGlobe]

Free Syrian Army spokesman Fahad al-Masri said that Hussam Hush Nawis, a senior commander in Iran’s Revolutionary Guard, and several of his aides, were killed in the attack. Lebanese media said he was on his way from Damascus to Beirut, while Al-Arabiya reported that Nawis had diplomatic status as Iranian President Mahmoud Ahmadinejad’s envoy to Lebanon.

In the first attack since 2007, Israel did not take direct responsibility for the strike but Defence Minister Ehud Barak hinted at his military’s role. Syria threatened – but did not carry out – a military retaliation.

Israeli PM Binyamin Netanyahu was said to have notified the US and Russia prior to the attack.

The attack came just three weeks after a vessel claimed by Israel to be carrying weapons to Hezbollah was stopped in the Red Sea.

Israel said that such arms shipments to Lebanon were in violation of United Nations Security Council Resolution 1701 from 2006, which bans weapons transfers from Syria and Iran.

An Israeli airstrike reportedly demolished the unfinished Syrian nuclear reactor in the northeast Deir Ezzour region. The White House and CIA stated that the Israeli air force attack was on a nuclear facility serving military purposes, which the Syrian government denied.

An International Atomic Energy Agency investigation later confirmed the presence of uranium and other materials consistent with a nuclear reactor. By April 2011, the UN’s nuclear watchdog officially confirmed that fact.

The operation was carried out by F-15I and F-16I fighter jets. Around eight aircraft participated and it was believed four had crossed into Syrian airspace.

AGM-65 Maverick air-to-ground tactical missiles and quarter-tonne bombs were reportedly used in the attack. Reports suggest that Israeli special commandos from either the Shaldag or Sayyeret Matkal unit had visited the site the day before to mark the facility for missile guidance units.

Some media report that as many as ten North Korean workers died in the strike. The Syrian government was alleged to have covered over the site with large quantities of dirt to prevent the spread of nuclear radiation.

Comparisons were made with the 1981 Israeli attack on the Iraqi nuclear reactor at Osirak.

A WikiLeaks report later suggested that the Syrians placed long-range missiles with chemical warheads on alert following the attack – but did not deploy them due to fears of an Israeli counterstrike.

The only other overt Israeli strike on a target in Syria since the 1973 Middle East War was the Israeli attack on October 5, 2003, against the alleged Palestinian fighter training camp Ain Es-Saheb, 22km northwest of Damascus. 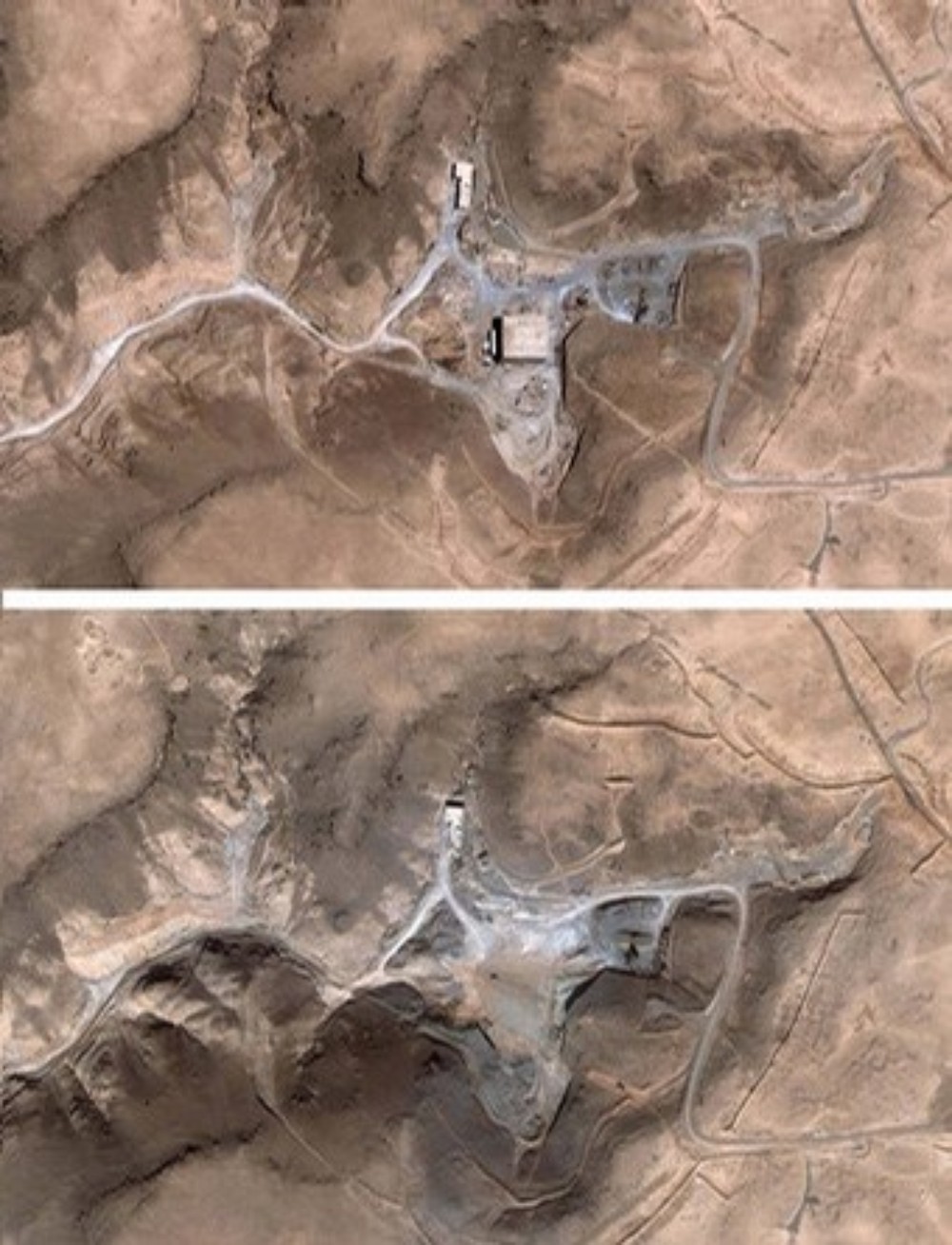 Aerial images from before and after show the site of the unfinished nuclear reactor allegedly bombed by Israel. Tonnes of earthworks were reportedly deposited on the site to prevent radiation exposure [Reuters]