The legend is more than 4,000 years old. An ancient god called Kon punished Peruvians by withholding rain, as they had not been paying thanks for the food and water they had.

Since then, the legend says, Peru’s coast has turned into a desert.

Four thousand years later, the people from Cerro Nueva Esperanza, on the outskirts of Lima, danced to what could have been rainmaking pleas to the gods. Instead, this was an offering to the Mother Earth. They were thankful that they could finally get water living over 1,000 metres above sea level – not from the ground, but from the sky.

The residents of Cerro Nueva Esperanza lived for years without water. But now more than 70 families can actually get it in their taps. For many, it is quite magical, because they get the water literally from the clouds.

Twenty nets have been set up on the hills to trap fog. The tightly woven fabrics end up heavily dampened, condensing water from the fog. Drop by drop, a plastic tube used as a canal carries the water that fills 20 tanks.

These nets are known as cloud catchers. And for many here, like 69-year-old Rosa Luna, they are miraculous.

When she moved to the region more than a decade ago, this hill was simply a dry patch of land. Most of Peru’s 2,500km of coastline is desert although there are a few coastal valleys watered by rivers that flow from the Andes Mountains towards the Pacific Ocean.

Like thousands of Peruvians, Luna used to carry home pails of water. “We used to travel two or three kilometres from my daughter’s home bringing the water and then walk up the hill with the buckets. At the time, we couldn’t even get a motorcycle up here.”

Then a road was built and water trucks could make it up the hill. But Rosa, like so many here, had little money to build a tank for herself, and pay around $40 worth of water every month. Two years ago, when the first 12 nets were installed, she became one of the first beneficiaries. A tube system was built so she could get the water straight into her home.

And then the unthinkable happened. She began watering a garden. Soon after, she was growing an aloe field, and making money from it. “Frankly, it is a dream. I don’t know if I am watching reality, or is this fake? When we were told two years ago what these nets were going to do we thought, ‘what is this?’ But now we are so thankful,” she says.

The cloud catchers at Cerro Nueva Esperanza are six-by-four metres and have the capacity to condense around 90 litres per day. “Altogether, we are talking about 3,000 litres at its best”, says Abel Cruz.

Cruz heads the movement Peruvians Without Water. They got in touch with German students whom, he says, invented the nets. Then USAID, the US government’s development agency, helped set them up. “We think that with this system and many more, this could become the pilot programme to secure water for thousands of people who don’t have water and sewage systems in Lima,” Cruz says.

It hardly ever rains in the capital. After Cairo, Lima is the largest city in the world built on a desert. And nearly 50 per cent of Peru’s population lives on the coast, relying on scarce water supplies. The Rimac River, which runs through the capital, is one of three main water sources. But it is fed from rain in the Andes Mountains: when the rainy season is over, there is less water in Lima.

Still, more than a million people do not have access to this water supply. At the Hiroshima Kindergarten, in the Ventanilla district, teachers designate two different children every day to fill two containers of water from the only tap in school. The whole class washes their hands there. “Until last year, each mother had to leave her child with a large bottle of water, because the children must wash their hands so often,” says teacher Olinda Coz.

Now they have a tap fed by a tank filled by water trucks.

The water company SEDAPAL is working to bring water to at least half a million homes in the next few years. Officials say it is a tough challenge in which the population has to play its part. “Our main goal is that consumers will also practice restraint to rationalise the demand and that will allow [us] to channel this water to those who don’t have it,” says Juan Carlos Barandiaran, development manager at SEDAPAL.

SEDAPAL is now developing other potable water sources in the Andes Mountains. The Huascacocha reservoir is helping to store more water during the winter – when it doesn’t rain in the Andes – which will help guarantee the flow of water in the future.

But for now, the people at Cerro Nueva Esperanza prefer to rely on the cloud catchers. They don’t think they will have a water system from SEDAPAL any time soon. Gutierrez says these cloud catchers have helped people change “from pointing fingers at institutions, demanding things, to doing something for the people’s needs”.

So on this day, the people from Cerro Nueva Esperanza professed their beliefs, singing and dancing. The water may not be drinkable just yet, but they know these cloud catchers could be the answer for thousands of Peruvians who will not have a water supply any time soon. 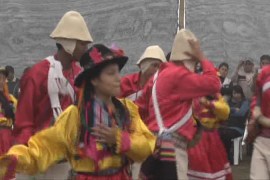 Some Peruvians forced to trigger rainfall by capturing fog on mountaintops in arid-climate country. 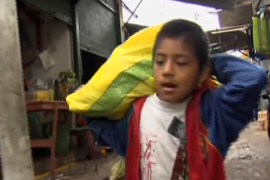 Labour union to seek protection for minors at work in country with highest child labour rate in the Americas. 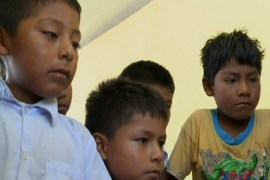 Children at a village school are able to do their homework on laptops, thanks to a windmill and solar panels.