The new law requires frequent audits, spot checks and, most punitively according to NGO workers, organisations will have to identify themselves publicly as “Foreign Agents” – a term, critics say, is resonant of Soviet era fears about  foreign spies.

Alexeyeva, who founded the Moscow Helsinki Watch Group – Russia’s oldest human rights organisation – in 1976 and is one of the few Soviet-era dissidents still active in Russia, finds the new Russia disturbingly reminiscent of the old one.

“Putin by nature is a very Soviet person. He has a sincere desire to first of all return Russia to the former status of the Soviet Union, to restore the old Soviet order,” Alexeyeva told Al Jazeera.

Civil society groups are dismayed, claiming the government is trying to discredit their work. Other organisations that will be affected by the law include Amnesty International, Human Rights Watch, Transparency International, and local election watchdog Golos.

“This is a disgraceful label and it’s unfair,” Alexeyeva said.

“We are not working for any foreign country. We protect our citizens from our own officials and government and I will not register our organisation as agents of foreign countries because that’s not what we are.”

Outside the State Duma, I met 35-year-old Alexander Sidyakin, a member of parliament for the ruling United Russia party who authored both the NGO law and a bill passed last month imposing heavy fines for unsanctioned street protests.

“This law is needed, and it’s needed now,” Sidyakin said.

Formally, the law is presented as necessary to improve transparency, but Sidyakin has become associated in recent months with what activists see as a concerted effort to crackdown on Russia’s opposition movement.

“[Putin] really believes that over 63 per cent of citizens voted for him, although of course that is falsified information,” explained Alexeyeva. “Now he’s decided that he needs to suppress this protest movement that appeared in the country after the Duma elections in December.”

Alexeyeva believes that President Vladimir Putin’s background as a former officer of the KGB means he sees only one way to govern and maintain order.

“He sincerely doesn’t understand that there might be other ways to strengthen your power other than to suppress, intimidate and lie. So, this is what he’s doing. All these laws are aimed at suppressing, intimidating and deceiving people.”

Back in the USSR?

When asked whether the Moscow Helsinki Watch Group would continue to function, Alexeyeva explained that she thought it would stop receiving foreign funding and survive with the help of volunteers, as it did in Soviet Times.

Will Putin succeed in turning the clock back?

“The Soviet Union was behind the iron curtain,” she explained.

“We were fenced off from the rest of the world. Now, Putin and his cronies, and even ordinary citizens, love to go abroad. Our television is full of foreign, especially American, movies. Our bureaucrats and wealthy people send their kids to be taught abroad. Their wives go shopping in other countries. They spend their holidays there. They earn and steal money here and spend it abroad. They keep their bank accounts abroad.

“The world has become global and it is impossible to return to Soviet rules. No matter how much Putin tries, Russia will never again be like the Soviet Union.” 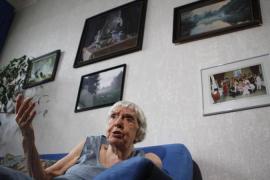 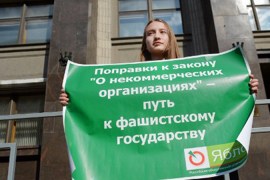 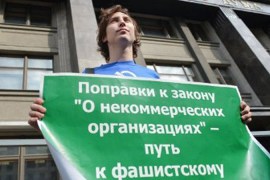 Controversial bill is seen as government ploy to stifle opposition and dissent and has been criticised by EU and US.