Washington DC – Five hundred days of union-led campaigning against the governor of Wisconsin have culminated in a body blow for the US labour movement.

Public sector unions and Democrats managed to collect enough signatures to force only the third recall election against a US governor in the country’s history – and they were confident that Democratic challenger Tom Barrett would run Scott Walker close as precincts across the Badger State opened their polling stations on Tuesday.

But Walker scored a comprehensive victory, with unofficial results putting him seven percentage points clear of Barrett. He is the first governor in US history to survive a recall election, in which voters can choose whether to remove an official from office before the end of their term.

The result has put Democrats and progressives under pressure as they prepare to appeal to millions of Americans in November’s presidential election. While they are seeking help to those facing torment in the US’s worst economic travails since the Great Depression, Republicans say only a programme of economic austerity will turn the country around.

“I thought the result in Wisconsin would be a good deal closer. I didn’t necessarily believe Walker would be defeated but I though the possibility existed,” says John Nichols, Washington correspondent for The Nation.

“Walker has had a significant lead in the polls but in the final days there seemed to be a closing of the gap in many polls. There also seemed an incredible energy on the ground. Sometimes we see that in politics, but it isn’t always reflected in a vote. I think Walker posted a wider win than expected.”

The result closes one chapter in a battle triggered by Walker’s attempt to limit collective bargaining for state employee unions in Wisconsin, where such rights have been held since 1959.

When running for the governorship in 2010 Walker backed a bill to take away the right of union members to speak with one voice during negotiations with their employers – and also said public sector workers should contribute more to their pensions.

A month after Walker was elected governor in January 2011, labour organisations led a series of protests against his proposals, often filling the Capitol building in Wisconsin.

The demonstrations symbolised the gulf between conservatives and liberals across the wider US, with fiscal hawks pushing for deep cuts to public spending and their opponents arguing that such a plan would only push millions of people into hardship and further stifle the economy.

US President Barack Obama stayed away from Wisconsin throughout the course of the recall campaign, in an apparent attempt not to alienate independents.

Obama took Wisconsin with ease in the 2009 presidential election, but the recall vote result suggests it will be a swing state in November.

Winning enough ‘swing states’ in the US’s electoral college voting system is key to the success of a presidential candidate’s campaign. 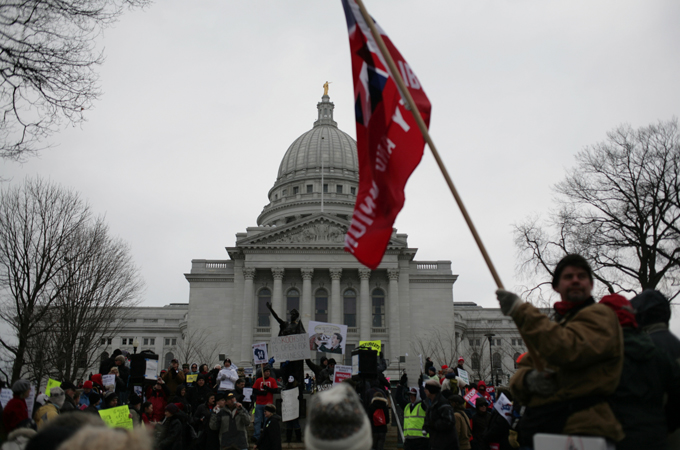 Republicans say the assured showing by Walker in Tuesday’s vote will energise the campaign of presumptive Republican presidential nominee Mitt Romney as he prepares to take on Obama.

“Obama didn’t want to come here to this state because he didn’t want to touch this race with a 10ft pole,” Ben Sparks, communications director for the Republican Party of Wisconsin, says.

“He wanted more than anything to avoid this race becoming a referendum on his presidency, because this recall election is going to affect his campaign in November.

“This race has tremendous national implications. Clearly the recall has backfired on Democrats and Wisconsin will be very much in play come November.”

Barrett’s election campaign was comprehensively outspent by Walker’s. The nonpartisan Wisconsin Democracy Campaign says that by the end of May Walker had raised $30.5m, compared to $3.9 million that Barrett’s team had brought in.

Labour unions and progressive political groups who led the effort to force the recall vote say Walker had more time to raise funds than Barrett did, owing to a state law which permitted him to take donations between the recall petition effort and the date the election was called.

“It was definitely an unfair playing field and what made it worse is that we had a Democratic primary, so we only had a month to organise the election,” Robert Kraig, executive director of Citizen Action of Wisconsin, says.

“But it created a situation where Walker outspent Barrett seven-to-one, and that’s not even counting the $20m in conservative interest group spending that went into the state.

“There’s a playing field in general where there’s an unprecedented amount of money on the side of conservatives and progressive groups need to have really good candidates just to have a fighting chance. Obviously, it didn’t all come together on Tuesday for progressives.”

Then there’s the fact that many progressive and public union member considered Barrett to be a compromise candidate. While collective bargaining was uppermost in the minds of those who had filled the Wisconsin state Capitol last year,

Democratic campaigners didn’t speak of the issue at all in the run-up to the recall vote.

Kraig says that while Barrett was a good candidate, his moderate tone may have been at odds with the ethos of progressives who are looking to safeguard labour union rights.

“Our movement was without charismatic leaders. It didn’t have a leader to turn to. You saw something similar in North Africa and the Middle East – once you are successful with your movement, there isn’t actually a leader.”

But Republicans say the reason the Democrats shied away from collective bargaining is because voters didn’t support it.

“This is not me spinning it – it is an actual fact – the majority of Wisconsin voters support Walker’s policies,” Sparks says.

“They don’t think it’s too much to ask for a public sector employee to kick in a bit more for his healthcare and pension, considering that he’s still paying less than someone in the private sector. For that reason, Democrats removed collective bargaining from their entire campaign.”

Sparks says their success in the election owes a lot to the way they organised themselves – in contrast to the Democratic challengers.

“We have fine-tuned our grassroots operation. Republican intensity has only grown and our focus has been on running a comprehensive volunteer-based grassroots campaign. We’re a single unified force.

“The Democrats on the other hand are a loose aggregation of smaller groups. They each run their own grassroots campaign and they don’t coordinate with each other. They have the unions, third-party groups. They are all doing their own thing, whereas the Republican Party of Wisconsin is more organised, more unified and more comprehensive.”

It wasn’t all bad for Democrats on Tuesday night. While Walker and the Republican lieutenant-governor held on to their positions in the voting, Democrats took control of the state senate in parallel polls.

That means the plans of Walker’s Republicans will not go past the legislature for now. Meanwhile, exit polls suggest about 18 percent of those who cast a vote for Walker said they intend to vote for Obama in November.

“Barack Obama has been saying ‘you should vote for me because even though the economic times aren’t so great, I think they are improving and I’ve got some policies that are moving us in the right direction.’

“But Scott Walker was saying the exact same thing – so we shouldn’t underestimate that there are some voters whose primary goal is to have an improved economy and yet are looking at different political figures and asking ‘what are you going to do for me, what are you offering?'”

Many voters across the state may have chosen to split their allegiance in an effort to tamp down the power of each party – in effect, keeping their powder dry until the big presidential contest in November.

“I think there are a lot of people who will look at the current circumstances and come up with a mixed response,” Nichols says.

“We had people down in Racine, Wisconsin who voted for Walker for governor and who also voted for a Democrat for the state senate – to check and balance Scott Walker.”

Wisconsin now appears to be finely balanced with only six months to go until the presidential election.

The Republicans are newly confident, and can take heart that they fended off a recall election they believe should never have been held in the first instance.

“I believe there will be a discussion on the role of what a recall election is in our state’s government. But one thing is very clear, and that is that the Democratic base was unable to effectively make the case to voters that this recall was in any way justified,” Sparks says.

“There was an issue with them even making a case to their own base, let alone to independent voters.”

Progressives believe that while they may have lost this particular encounter, they’ll soon be in the ascendancy. They point to the fact that more than a million people signed petitions to set up the recall election in the first place.

“There is a huge grassroots movement out there. It’s up against a very energised Republican base as well, but we can’t let one disappointing election kill a movement,” Kraig says.

“The conservative movement lost elections for years and kept going; we need to do the same thing. We need a strong union movement in order to have a large and vibrant middle class.

“We also need a movement that is beyond labour in order to fight for a fair economy and expand opportunity in this country, because we’ve had a huge concentration of wealth and rising income equality for decades here.”

With unemployment stubbornly above the eight per cent mark, millions of Americans enduring dire economic hardship will be in play come November.

If Wisconsin is any indicator, success for each side will come down as much to grassroots organisation and money – lots of it – as it will to pledges and policies.