Bethlehem, occupied Palestinian territories – For millions of Christians around the world, the Church of the Nativity in Bethlehem is a place for worship and contemplation, a revered site worth travelling thousands of kilometres for a chance to kneel before the birthplace of Jesus Christ. A tiny door welcomes visitors to the church, forcing them to humbly bow before making their way inside. Mosaics and glass lamps adorn the dimly lit church and a narrow stairway leads visitors to the grotto where Jesus is believed to have been born.

Little do those pilgrims know that the church is about to become the centre of contention in St Petersburg, Russia, where Palestinians are hoping that a “Hail Mary vote” due on Friday, June 29 will mark the inclusion of Jesus’ birthplace on the United Nations Scientific and Cultural Organisation‘s (UNESCO) World Heritage List.

Churches, monasteries and convents from Armenia to Uruguay are a part of the world-renowned list by UNESCO, which protects natural and cultural heritage that meet its criteria for “universal value to humanity”.

In its meeting that concludes on July 6, the UN body’s World Heritage Committee, comprising 21 member states, will consider whether to add the Church of the Nativity to its list. 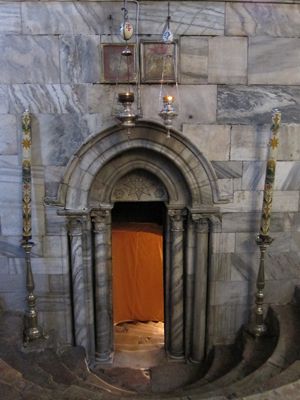 Palestinians feel that it is only natural that Jesus’ birthplace be part of this list. “There are [more than] 900 locations at the World Heritage List – why not Palestine?” said Bethlehem’s deputy mayor, George Saadeh. “What is more important than the Church of the Nativity and City of Bethlehem?”

In addition to churches and holy places, World Heritage Sites include the Pyramids in Egypt, the Grand Canyon in the United States and France’s Notre Dame Cathedral.

Bethlehem’s Church of Nativity, the Greek Orthodox Convent, the Church of St Catherine, the Latin and Armenian Convents and the surrounding route taken by pilgrims have all been nominated for inclusion on the list.

The Palestinian Authority (PA) filed to have these sites included in February 2011. Meanwhile, the PA applied to join UNESCO, and was admitted as a member nine months later. This caused the US and Israel to cut off their funding to UNESCO, causing the organisation to lose more than a quarter of its annual revenue.

Both countries viewed Palestine’s membership bid as a unilateral attempt to gain statehood recognition in light of a moribund peace process. The upcoming vote on the Church of the Nativity is expected to be just as controversial, and many committee member abstentions are expected.

The PA has an amendable list of other sites that it will slowly add to the Heritage List, including the village of Battir and the old cities of Jerusalem and Hebron.

Bethlehem is a top destination for tourists and pilgrims visiting the Holy Land and is a major income generator for Palestinians. Tourism to this revered city has been hit hard in the past few years because of stringent Israeli military restrictions on movement, mushrooming illegal settlements, and the separation wall that has cut the city off from neighbouring Jerusalem.

Not only does Israel control the border points with Jordan and Egypt (the only exit and entry points to the Palestinian Territories), but it also controls movement between the West Bank and Jerusalem. Tourists and Palestinian guides alike are subject to this system and, accordingly, Israel dictates how foreign dollars are spent.

In effect, Bethlehem draws travellers who come here on short day visits, and go back to their Jerusalem hotels in the evening, depriving Palestinian hotels and establishments from reaping the full benefits of visiting groups.

In addition to the Israeli military chokehold on the city, there are 22 settlements on the land surrounding Bethlehem, four of which disconnect the city from Jerusalem, according to the PLO Negotiations Support Unit. Once complete, an additional settlement, Givat Yael, will complete the ring of settlements that encircle Jerusalem, virtually cutting it off from the rest of the West Bank.

The effects of the occupation on this holy city are glaring: closed shops dot the pilgrimage route along Star Street – believed to be the path taken by Mary and Joseph – with hardly any tourists in sight.

Deputy Mayor Saadeh said he thinks that gaining World Heritage status would not only protect and preserve the city, but also help market it as a destination worth visiting for much longer than a day. This would bring economic benefits to the city and attract much-needed funds for restoration and preservation.

“Bethlehem is the capital city of the Christian world. It is a place of great historical, religious and cultural importance,” he said. “We want to protect and preserve [it]. This is very important for the Palestinian people, for us as Christians and for the world.” 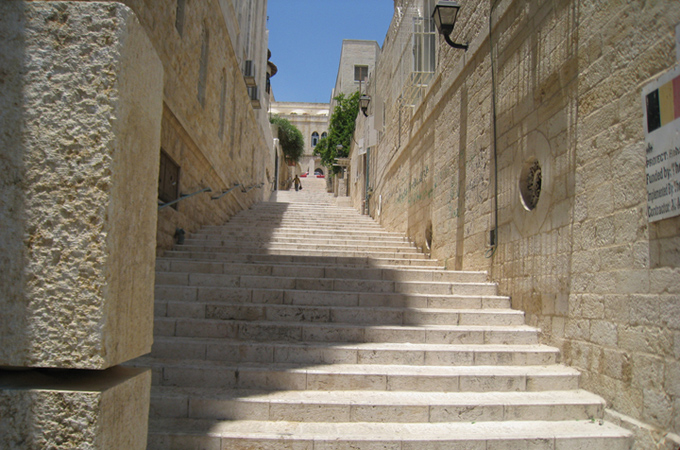 Bethlehem has lost tourists, in part, because of illegal settlements and the separation wall, say residents [Dalia Hatuqa/Al Jazeera]

The last restoration made on church property was in the 1950s, and conservation methods acknowledged by the World Heritage Committee were not used.

“The roof of the church is leaking and causing deterioration to the icons and mosaics on the walls,” said Nada Atrash, an architect at Bethlehem’s Centre for Cultural Heritage Preservation.

“The main entrance is damaged and has had to be supported by wood panels since the mid-19th century. Bethlehem is deteriorating and we need immediate intervention,” she said.

In addition to renovation and restoration issues, the church suffered extensive damage when Israeli troops and tanks besieged it for more than a month in 2002.

Israel has opposed the Palestinians’ attempt to list the church’s location as “Palestine”, saying that the attempt to have it listed is “a unilateral act” that could only be taken once final status negotiations have resumed. But the Palestinians argue that, as a member of UNESCO, they have the right to protect their heritage.

Officials have made it clear that this move also comes under the umbrella of self-determination, and they are moving ahead with their bid, despite a committee of UNESCO experts saying that the move should be delayed by at least a year on the grounds that the church is not in any imminent danger.

But in an open letter to UNESCO’s world heritage committee, 15 Bethlehem organisations said the “international community has a legal and moral responsibility to protect our sites [after] 45 years of illegal Israeli occupation”.

They urged the 21 party states due to vote on Friday, including France, Germany and India, to “lend Bethlehem your voice and vote in favour of [its] inclusion as a World Heritage Site. The time for our long overdue admission is now.”

The UN Educational, Scientific and Cultural Organisation (UNESCO) has granted endangered World Heritage status and funding for repairs to the site revered by Christians as Jesus’s birthplace in the West Bank city of Bethlehem, despite objections from the United States and Israel.

Thirteen of the 21 members of the World Heritage Committee voted in favour of the move at a meeting on June 29 in St.
Petersburg, Russia. Six members had voted against it and two abstained.