As photo ops go, Wednesday’s prime ministerial inauguration of a Turkish-made training plane at a military-industrial base in Ankara could hardly have been better timed.

According to the Turks, the F4 Phantom jet downed by Syrian air defences on June 22 was on a training flight.

The launch of the Hurkus, which means “freebird,” was apparently scheduled long before the “border incident”. But the message was clear; pilot training will go on, no matter who fires at Turkish planes.

Recep Tayyip Erdogan – the “Top Gun of Turkish politics” – climbed into the cockpit wearing a pilot’s jacket and gave the thumbs-up.

The wide shot, which reveals a plane similar to the kind used to winch paragliders up over a beach, perhaps not so overwhelming.

“We don’t shy away from putting rogue states and those that test Turkey’s greatness in their place,” Erdogan declared at the ceremony.

“The Turkish army is one of the world’s strongest armies. We don’t mean to attack anyone. We build to preserve the peace, to fight off threats against our safety and our unity.

“Great states have enemies. Those who view these lowly attacks on our ships, planes and our flag as [a sign of our] weakness are those who lack great states.”

So Syria lacks a “great state”. But it seems to have “great air defences.” Or did those Syrians manning the border systems just get a lucky shot?

The gap between what Turkey is saying about how the F4 came down, and what Syria is saying, is now so wide that it is not possible to believe both countries are relaying the correct version of events. 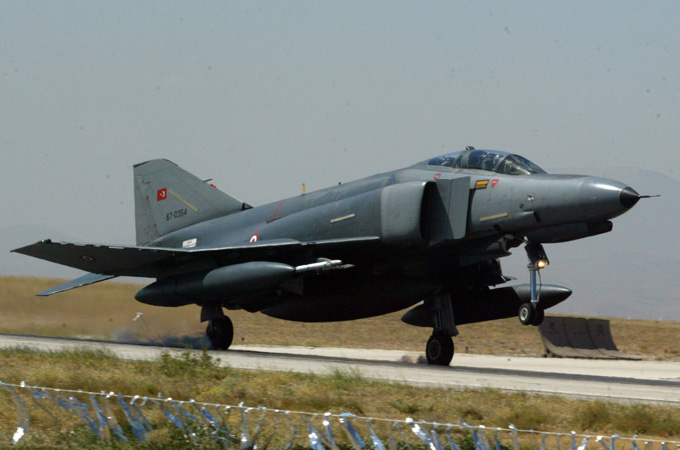 In fact, in his press conference in Damascus on June 25, the spokesman for the Syrian foreign ministry, Jihad Makdissi, went further. He said Turkish foreign minister Ahmet Davotoglu had “been lying.”

The Syrian version of events, as told by Makdissi – a likeable and highly intelligent Syrian official who used to speak to this correspondent before the Syrian government made it official policy to blame Al Jazeera for the violence in the country – is that the incident was all Turkey’s fault.

The Phantom F4, he said, “appeared on the radar suddenly at a height of 100 metres, between 1-2km from the coastline over the sea … at 11:40am we saw a plane flying directly into Syrian territory, flying at a speed of 800km per hour, so we applied our defences, according to international law”.

“The weapon used for this was a machine gun … this machine gun is specially designed for anti-aircraft defence,” he said.

“It is a 23-57. It’s located on the Syrian coast, and it made a direct hit on the plane, which fell into Syrian waters.”

‘With their own eyes’

It is not clear to me here from the layman’s rendering of anti-aircraft defence which precise model Jihad Makdissi is talking about, but it is something like one of these. It is not exactly state-of-the art.

Turkey was making “untrue” statements when it claimed the F4 was shot down in international airspace, 13 nautical miles off the coast of Syria (and therefore one mile outside Syrian territory), said Makdissi.

The anti-aircraft battery crew could see the plane “with their own eyes”. He went on: “The machine gun has a range of 1-2km.

“We can prove it by the tail of the plane – it’s clear that this plane was shot by a machine gun.”

And these guns do not have radars, so they cannot supply warnings, he added for good measure.

I spoke later with a Turkish foreign ministry source who expressed, shall we say, deep scepticism about the Syrian version of events.

At the speed the plane was travelling, how could it have been shot down by an anti-aircraft gun?

“The plane was shot down by a missile, we know that,” he told me. Yes, he said, the Syrians had given the Turks a piece of the tail – not the whole tail – but the markings on it were far from clear, as the plane was not in a good state on the way down.

But of course the bulk of the wreckage is still 1,300 metres down on the sea bottom.

As a Turkish columnist has noted, this is one of the most watched areas of coastline in the world. After Syria, and its Russian base at Tartous, the coast becomes Lebanon and then Israel.

What actually happened in those split seconds must have blipped across more than a few international satellite monitors and radar screens.

And perhaps Israel was bound to pop up at some point in the discourse.

Turkey pointed out – not mentioning Israel directly by name – that “other countries” had infringed Syrian airspace before and not been shot at.

Turkey meant Syria had never dared to shoot at an Israeli plane, even when one levelled a nuclear facility under construction in eastern Syria back in 2007.

And that was precisely the sore point that the Syrians were invoking. “It was the same route the Israeli planes took in 2007,” said Makdissi.

“Turkish planes and Israeli planes look similar,” explained Syrian Information minister Omran al-Zoebi on Wednesday. “They may have thought it was an Israeli plane.”

Despite all the explanations, context and justifications, the Syrians still seem very keen to portray this as an unfortunate, if understandable, accident. “There were no bad intentions,” reiterated Zoebi.

The Turks seem equally determined to portray it as anything but.

Intriguingly, on Wednesday, Russian President Vladimir Putin called Erodgan to say that “Russia is deeply sorry for the incident”.

Does this imply some fancy Russian air defence system was actually what did the damage to the Turkish plane, as many still believe?

Why would Russian media be reporting that Moscow has now halted delivery of S300 missiles to Damascus?

Ali Saeedlou, the Iranian vice president, is arriving in Turkey late on Wednesday evening to “mediate” between the two sides.

If the Turks had sent the F4 reconnaissance jet on a mission to probe Syria’s air defences, as many believe it had – despite Turkish assertions that the plane was testing Turkey’s own radar systems – then Turkey certainly found out more than it bargained for.

The two pilots who could answer this question are still missing, now presumed dead, though there is speculation in the Turkish press that the Syrians have got them and are holding them as prisoners.

“Not true,” said the Syrian information minister on Wednesday.