As Predator drones obliterate targets in Central Asia, an armada of unmanned aerial vehicles (UAVs) is forecast to take over the United States’ skies. These UAVs won’t be raining down Hellfire missiles, but concerns are being raised over what exactly they will be doing.

A major shift in US airspace control is under way, after the Federal Aviation Administration (FAA) legislation was passed by Congress earlier this year. The act fully integrates drone technology by 2015, meaning UAVs are destined to become a major part of American life.

But many worry privacy laws aren’t keeping pace with the technology. UAVs can be equipped with formidable surveillance tools, such as military-grade video equipment that can read a milk carton from 60,000 feet (18,300 metres). Thermal imaging and facial recognition technology, Wi-Fi network cracking capabilities, and systems to intercept text messages and phone calls can also be deployed.

At present, no clear rules exist over what information law enforcement agencies can scoop up from the public and save. And, privacy advocates say, the invasion of the drones has already begun.

In May, the FAA announced police and first responders are allowed to fly drones weighing as much as 25 pounds (11.3 kilograms) in general airspace below 400 feet (120 metres) – without applying for special approval. The FAA has signed off on about 300 certificates of authorisation for government agencies, universities and private companies.

One group concerned about privacy violations is San Francisco-based Electronic Frontier Foundation. It filed a Freedom of Information Request and received an FAA list of organisations given permission to fly drones.

“The privacy dangers posed by drones are unprecedented in scope and current privacy law is not equipped to deal with them,” the group’s Trevor Timm told Al Jazeera. “Surveillance drones may soon be in the lives of everyday American citizens if police are allowed to use them with no judicial oversight or privacy protections.”

The benefits of drone technology are wide-ranging. Advocates say unmanned aerial vehicles can assist in disaster relief, search for missing persons, dust crops, and provide traffic reports – all at a fraction of the cost of using helicopters and manned aircraft.

The UAV industry is expected to double to $12bn in a decade, resulting in thousands of jobs. Nearly 50 companies around the world are developing about 150 different systems, from small “insect” models to ones the size of commercial aircraft.

US Senator Rand Paul has introduced the Preserving Freedom from Unwarranted Surveillance Act of 2012, which would require agencies to acquire a warrant before using drones to spy on people, unless extraordinary circumstances exist.

US Representatives Ed Markey and Joe Barton sent a letter telling the FAA it has “the responsibility to ensure that the privacy of individuals is protected and that the public is fully informed about who is using drones in public airspace and why”.

But when asked if privacy rules were being considered in its deliberations, the agency said in an email: “The FAA’s top mission and charter is safety … FAA has regulatory oversight from a safety perspective only.”

The Association for Unmanned Vehicle Systems International, an industry group, said privacy protections are being discussed as the FAA prepares to release guidelines later this year.

“We have already met with nearly a dozen privacy and civil liberties advocacy organisations … to begin a constructive dialogue about how best to advance this incredibly beneficial technology safely and responsibly,” said spokeswoman Melanie Hinton.

John Whitehead of the conservative Rutherford Institute think tank is wary, however. A constitutional lawyer, Whitehead said law enforcement’s past record on surveillance technology does not bode well for privacy amid the rise of the drones.

“Based upon the government’s positions on wiretapping, GPS tracking devices and internet tracking technologies, it also is unlikely that our elected officials will do anything to protect the American people from the prying eye of the American government,” Whitehead said.

As a new technology, legal precedent does not exist to guide courts on drone surveillance. Writing in the Washington Post, Benjamin Wittes and John Villasenor of the Brookings Institution highlighted Supreme Court cases in California in 1986 and Florida in 1989, pertaining to manned police aircraft monitoring suspects’ property.

In both cases, the court ruled observations made from “public navigable airspace” in the absence of a warrant did not violate the Fourth Amendment, which protects Americans from unreasonable government searches.

Drones for law enforcement also have the capability of carrying a variety of weapons, including 12-gauge shotguns, grenade and tear gas launchers, and rubber-bullet guns.

Michael Buscher, chief executive officer of Vanguard Defense Industries, said the focus for law enforcement agencies is “less lethal systems”. UAVs could be armed with a gun that fires bean bags known as a “stun baton”, he told Officer.com.

Montgomery County Police Department was the first in Texas to receive a certificate of authorisation to deploy drones from the FAA. Chief Deputy Randy McDaniel said arming drones could save officers on the ground.

“Impact rounds, chemical munitions rounds, or a Taser – those are things that law enforcement utilises day in and day out,” McDaniel told The Daily. “It might be advantageous to have this type of less lethal weapons platform on the UAV.”

As for privacy, McDaniel added there is no interest in spying on innocent Texans. “Just to see what you’re doing in your backyard pool – we don’t care.” 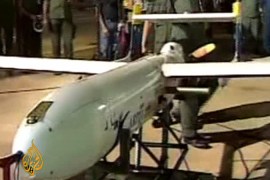 Iran’s help sought to design drones whose stated use is for defence and to monitor pipelines and infrastructure. 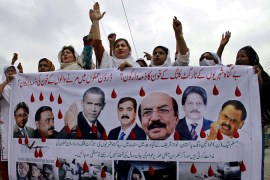 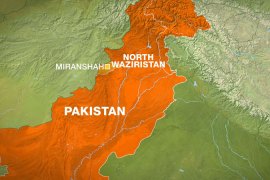 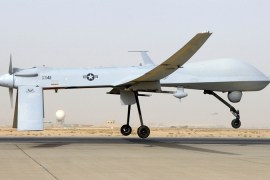 How effective are US drone strikes?

As the US confirms killing another key al-Qaeda target, we ask if its reliance on drone strikes can be justified.