Athens, Greece – The questions hovering over Greece’s June 17 general election are many and momentous. Can Greece stay within the eurozone, rebuild trust with its partners, fix its economy and reform its political system, all while governing itself democratically?

Greece has had an appointed prime minister since November 2011, and a caretaker cabinet since a May 6 election failed to produce a government. The country is distressed by three years of recession, a quarter of its workforce unemployed, salary and pension cuts of as much as 50 per cent (for those who still have pensions), a healthcare system showing signs of collapse and the all-pervasive question of whether austerity is bringing the nation closer to solvency or killing its economy.

Parties have inevitably fallen into two categories: those in favour of, and those against, the European-led bailout loan worth 130bn euro ($163bn), which was accompanied by a severe austerity programme – referred to as the “memorandum agreement”. Conservative New Democracy emerged as the champion of the former on May 6, with 19 percent of the vote, and radical left coalition Syriza as the champion of the latter, just two points behind.

If opinion polls are any indication, June 17 will be a neck-and-neck race between the two. Each was polling as much as 30 per cent of the popular vote when a ban on poll publication in the fortnight before the election took effect. This, however, remains far shy of the roughly 38 percent of the vote needed to win power outright.

Knowing that one-party governments are a luxury of the past, the primary goal for these two is to beat each other and claim the 50-seat bonus in parliament that goes to the top party. That could then put either of them within a dozen seats of forming a government.

Politicians have polarised the public in pursuit of that bonus. “We will, on no account, offer confidence or support to a pro-memorandum government,” said Syriza leader Alexis Tsipras in a Contra interview on Monday night.

“On June 18th we will have a government of the left, or a memorandum government. There are only two choices.”

New Democracy leader Antonis Samaras has portrayed the election equally starkly, as a choice between the drachma and the euro. He told voters in northern Greece on Thursday: “This election … is about dilemmas that will be decisive for the future of our children – dilemmas such as whether we stay in the eurozone and [opt for] stability, or go for the drachma and isolation.”

Far from the madding crowds, however, the line between pro- and anti- memorandum politics becomes more blurred.

Yiorgos Stathakis, one of Syriza’s four key economic policy planners, was more nuanced when he talked about Greece’s loan agreement to Al Jazeera. “We are not going to change it or renegotiate the loan agreement,” he said. “But concerning the Greek programme – internal economic policies – there we propose a completely different plan to get the economy out of the recession and be able to have some form of social cohesion again … we will not move unilaterally to make some sort of break with our European partners.”

Notis Mitarakis, deputy shadow finance minister for New Democracy, also left the door cracked open for a possible collaboration with Syriza. “We need to change the [austerity] policy, because austerity alone hasn’t worked, and … we need to make all the changes within the European framework,” he told Al Jazeera.

“We will talk to anyone who feels comfortable with these two conditions.”

Greece is holding this repeat election because of the two parties’ inability to collaborate following the most recent election. They were punished for this. Nothing was more evident after the election than voters’ contempt for the entire political class, ostensibly because of their failure to achieve a patriotic consensus.

Greeks are not going to the polls to create two sumo wrestlers. As Stathakis told Al Jazeera: “If we are the second party, will allow New Democracy to pursue its policies and we’ll support whatever is positive, and be critical of whatever is negative. I think New Democracy will do the same thing if Syriza is the first party.”

There are fears that a coalition excluding one of the two big players would merely buy time until the 2013 budget is presented in October. But a spirit of bipartisanship may also be the result. The two parties have similar social platforms, for example.

Both want to help over-indebted households that pay more than 30 per cent of their income to banks. New Democracy, for instance, says it would give them the chance to service only interest payments, excluding principal, and would subsidise interest on first home loans to the tune of two per cent. Syriza says it would extend loan maturities to bring down the monthly bill, and it would completely write off loans to those not meeting a “dignified means of living”.

A second area of mutual attraction is an emphasis on growth. Both parties want to help kickstart the economy by bringing as much revenue as possible from public real estate and the country’s natural wealth, such as in renewable energy. Both want to use every available penny of EU funds (Greece still has not absorbed some 14bn euro ($17.5bn) in Community Support funds). Both want to reshape farming to produce high-end, exportable goods, extend the tourist season and bring Greek shipping under the Greek flag.

Both are committed to cutting waste and corruption in the public sector. New Democracy wants to start governing with just 15 ministries, reducing them to ten. Syriza wants e-government, e-procurement and transparency everywhere, a practice begun by the centre-left Pasok party.

But the substantive differences between Syriza and New Democracy will be hard to bridge. New Democracy wanted to lower the rate of income tax paid by the top bracket to 32 per cent, and have a flat 15 per cent corporate tax. Syriza reportedly wants to slap the rich with a 75 per cent tax rate and visit particularly harsh taxes upon large corporations.

Syriza is also deeply statist. It wants to reverse every privatisation that has taken place over the past 15 years, and turn around state utilities to make a profit. The backbone of the economy, Greece’s banking system, would also face nationalisation. New Democracy’s leader, Antonis Samaras, on the other hand, has flatly stated that “everything that can be privatised will be privatised”.

New Democracy wants “illegal immigrants” to be sent to detention camps and then deported. Syriza wants those detention centres to be open reception areas and to abolish deportations.

It is difficult to see these differences being resolved without breaking moulds of party thought and suffering losses on the extremes of each. Syriza and New Democracy might, of course, make a stronger effort this time around, seeing how much closer the country is to the brink of collapse in social services. But unless one of the smaller parties relents and agrees to form a coalition with either, they may also be likely to try for a third round of elections. By then, the public payroll, pensions and healthcare may have begun to unravel so badly that central debate of this round of elections would be moot. Greece could be in an ever clearer state of bankruptcy and its fiscal adjustment would have to take place overnight. 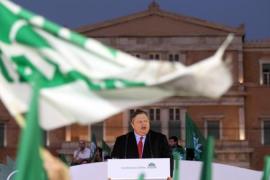 Greece and the future of the European project

The neoliberal economic experiment with Greece will make or break the European Union as we know it. 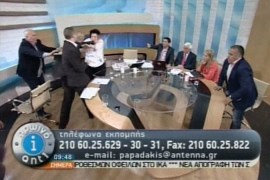 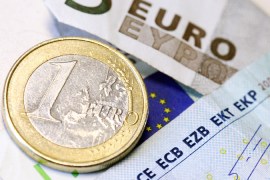 Doubts over Greece weigh on euro