Rebekah Brooks, a former editor of the UK’s now-defunct News of the World newspaper, has been charged with perverting the course of justice over the phone-hacking scandal, British prosecutors have said.

“I have concluded … there is sufficient evidence for there to be a realistic prospect of conviction,” Alison Levitt, Principal Legal Advisor to the Director of Public Prosecutions, said on Tuesday.

“All these matters relate to the ongoing police investigation into allegations of phone hacking and corruption of public officials in relation to the News of the World and The Sun newspapers,” Levitt said.

Brooks, who rose to be chief executive of News International, the British newspaper arm of Murdoch’s News Corporation media empire, was charged with concealing material from detectives, conspiring to remove boxes of archive records from the company’s headquarters, and hiding documents, computers and other electronic equipment from the police.

Also charged were Brooks’ race horse trainer husband Charlie Brooks, her secretary and other staff who worked for News International, including her driver and security officials.

Leaving her lawyer’s offices with her husband, Brooks said she was baffled by the decision to charge her. “I cannot express my anger enough that those close to me have unfairly been dragged into this.”

She also said that the details of the case would emerge one day.

In a previous statement, Brooks and her husband said: “We deplore this weak and unjust decision. After the further unprecedented posturing of the CPS (Crown Prosecution Service) we will respond later today after our return from the police station.”

The news is a personal blow for Murdoch and also embarrassing for David Cameron, the British prime minister, who was a close friend of Brooks and her husband. There was no comment from Cameron’s office.

The charges are the first to be laid since police launched a new inquiry last year into allegations that journalists at the News of the World hacked into the phones of celebrities, politicians and victims of crime to generate front page stories.

The newspaper was shut down in July last year over the allegations and Brooks resigned from her post at News International.

Dubbed by some the “fifth daughter” of Murdoch, Brooks edited the News of the World from 2000 to 2003 and went on to become the first female editor of The Sun daily tabloid, Britain’s most widely read newspaper, for six years. 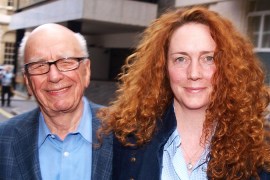 Rebekah Brooks says she got messages of sympathy from prime minister after she quit as CEO of Murdoch’s media company.