Athens, Greece – On May 6, Greek voters – battered by recession and largely disillusioned with the country’s two biggest political parties, PASOK and New Democracy – will go to the polls to choose new members of the Hellenic Parliament.

The central issue in the election is what has come to be known simply as “the memorandum”. In October 2011, the European Union and International Monetary Fund offered cash-strapped Greece a second financial rescue package, but only under conditions spelled out in a Memorandum of Understanding.

These conditions require that Greece improve its finances by cutting spending and raising revenue. To do so, the Greek government – led by an interim government consisting of both PASOK and New Democracy – has slashed pensions and wages and raised taxes.

Anger with the memorandum has given birth to several new parties. Thirty-two parties will compete in the elections, and polls suggest that about ten of them are likely to win seats in parliament. With no single party likely to win much more than a quarter of the vote, a confusing aftermath seems probable.

If no party receives an absolute majority of votes – as will almost certainly be the case – the party that received the most votes will be tasked with forming a coalition that can win the support of a majority of parliament’s 300 members.

What do Greece’s political parties stand for? The ten parties that polls show are most likely to win seats in parliament are described below, roughly arranged by ideology – centrists, the left, and the right.

However, whether or not a party supported the memorandum may prove to be a more important factor in this election than its location on the left-right spectrum.

New Democracy, Greece’s main centre-right party, was clobbered at the polls in the 2009 elections. And since November 2011, when it joined PASOK in a ruling coalition, support for ND has dropped even further, with right-wing parties reaping gains.

ND opposed the first EU-IMF bailout package in 2010 and subsequent austerity measures, when PASOK was the sole governing party. However, after Prime Minister George Papandreou resigned in November 2011, ND joined PASOK in an interim government tasked with taking the necessary measures to secure a second EU-IMF bailout package.

Despite declining support, ND looks set to win more votes than any other party, with between 20-25 per cent of Greeks planning to vote for it. And under Greek election law, the party that wins the most votes automatically wins 50 extra seats in parliament. Many expect ND leader Antonis Samaras to become Greece’s next prime minister.

Samaras has promised to raise pensions and cut taxes, and has said he wants to renegotiate aspects of the memorandum after the election.

Founded in 1974, centre-left PASOK performed well in the 2009 parliamentary elections, and currently holds more seats in parliament than any other party.

Shortly after taking power, however, the administration announced that Greece’s budget deficit was more than twice as large as the previous government had publicly claimed. In the face of spiralling bond yields, the PASOK-led government requested a bailout package from the EU and IMF, implementing austerity measures to secure European support.

PASOK bills itself as a socialist party, but critics on the left have charged that its support for austerity – which includes big cuts to social spending – make it socialist in name only. Now, the party’s support is near historic lows. Polls show that just about 15-18 per cent plan on voting for PASOK.

Party leader Evangelos Venizelos, formerly the Greek finance minister, has said the party will not support further tax hikes, and has suggested Greece will need to implement structural reforms and privatisation to make its economy more competitive.

Greece’s oldest political party, the KKE, was founded in 1918 and has historically played a major role on the Greek left. Today, the KKE adheres to doctrinaire, Marxist-Leninist communism. It has ruled out working in a coalition with other left-wing parties.

Party leader Aleka Papariga has said the party supports “complete disengagement” from the European Union, and wants to abandon the euro in favour of Greece’s previous currency, the drachma. The KKE has staunchly opposed the terms of the EU-IMF bailouts.

The KKE’s support tends to come from Greece’s working class, especially in big cities and in industrial regions. Currently, about one in ten Greeks say they plan on voting for the KKE.

Made up of 16 ideologically diverse left-wing parties, SYRIZA includes “social democrats, radical ecologists, radical socialists, Trotskyists, and even anarchists”, according to Matthaios Tsimitakis, a SYRIZA supporter and an editor of political blog Greek Left Review.

SYRIZA supports Greece’s membership in the European Union, but rejects the austerity measures required by the memorandum. SYRIZA has made repeated overtures to other parties on the left inviting them to form an anti-bailout coalition. However, both the KKE and Democratic Left have rebuffed this proposal.

About ten per cent of voters support SYRIZA, say polls.

Led by the self-effacing Fotis Kouvelis, Democratic Left was formed in 2010 by SYRIZA defectors, who viewed the coalition’s outlook as becoming increasingly anti-Europe.

Democratic Left takes a more moderate position on the memorandum than SYRIZA, maintaining that Greece could fulfill its requirements while scrapping the harsher elements of austerity, such as legislation passed in February that reduced the minimum wage.

Kouvelis has said that the party would not be open to a coalition with the current ruling parties, PASOK and New Democracy.

Polls show about eight per cent of voters plan on voting for Democratic Left.

Founded in 2002, this environmentalist party has never broken the three per cent barrier necessary to win seats in parliament. That might change this election: polls show the party may narrowly pass the threshold.

Ecologist Greens oppose the memorandum, partly for environmental reasons. Yiannis Paraskevopoulos, the head of the party’s list of state deputies, said that the reforms spelled out in the memorandum favour an “economy of plunder”, including plans to drill for oil and mine gold in Greece.

The party supports Greece’s membership in the eurozone and the EU. Although Ecologist Greens have said they would not be part of a coalition with New Democracy or PASOK, they may be open to working with SYRIZA.

Led by Dora Bakoyannis, the first female mayor in the history of Athens, the centre-right Democratic Alliance is one of the few parties outside the ruling coalition that supports the memorandum.

Bakoyannis founded the party after being expelled from New Democracy in 2010 for voting in favour of austerity measures, which New Democracy opposed at the time. Now, Bakoyannis has said that the party would be willing to enter into a coalition with PASOK and New Democracy, under certain conditions.

The party advocates a flat tax rate and a reduction in the number of public-sector employees.

Polling at only about three per cent support, Democratic Alliance may just barely manage to win seats in parliament.

Created just two months ago by New Democracy dissidents unhappy with the terms of the bailout, Independent Greeks look set to win about ten per cent of the vote, say polls – with much of it likely to come at the expense of New Democracy.

The party has been adept at using social media sites such as Facebook and Twitter to spread its message. For what it’s worth, Athens News notes that party leader Panos Kammenos has several times more “likes” on his Facebook page than the leaders of either of the two major parties, PASOK and ND.

Kammenos has said that the party would not work with PASOK or ND after the election. He also rebuffed an unexpected overture from Alexis Tsipras, leader of left-wing SYRIZA, who had suggested that the parties might work together in an anti-bailout coalition.

The nationalist Popular Orthodox Rally party briefly took part in the ruling PASOK/ND coalition – marking its first time in power – but pulled out in February 2012, after refusing to support further austerity measures. All four of LAOS’ government ministers resigned from their cabinet positions.

Like other Greek right-wing parties, LAOS – which describes itself as “hellenocentric” – opposes illegal immigration, and suggests deporting all undocumented immigrants. “I don’t want them to become a majority,” party leader Giorgis Karatzaferis has said. LAOS also supports tax cuts and a hard line against Turkey.

The party’s short membership in the interim government has caused some voters to flee to far-right parties such as Golden Dawn. Polls show LAOS with about four per cent support.

Golden Dawn, which is virulently anti-immigrant, has said that undocumented immigrants should be immediately deported – and that immigrants who are in Greece legally should eventually be removed as well. Golden Dawn has recently gained publicity for offering to accompany elderly people on grocery shopping trips if they feel unsafe leaving their homes alone.

The party is nostalgic for Nazism: its logo resembles a swastika, some party officials reportedly deny the Holocaust occurred, and video appears to show party leader Nikos Michaloliakos giving a Nazi salute in the Athens city council. He claims, however, that it was merely “the salute of the national youth organisation of [Greek dictator] Ioannis Metaxas”, reports the Athens News.

The remaining 22 parties competing in the election are running on platforms ranging from neoliberal (Drasi) to centrist (Union of Centrists) to revolutionary (Anticapitalist Left for the Overthrow) to pro-internet freedoms (Pirate Party of Greece).

Four parties were banned from participating in the elections. One party, named “Tyrannicides”, was barred because its name “demonstrated criminal intent”, said Greece’s Supreme Court.

And perhaps the most prolix party is led by 83-year-old perennial candidate Miltiadis Tzalazidis, who spells out his party’s platform in its name: “Renewing Independent Left, Renewing Right, Renewing Pasok, Renewing New Democracy, No to War, Party of Action, I Give Away Land, I Pardon Debts, I Save Lives, Panagrarian Labour Movement of Greece.” 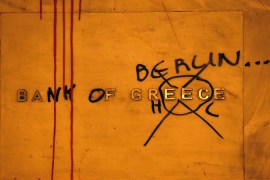 The European economic establishment is pushing policies with little theoretical or empirical support. 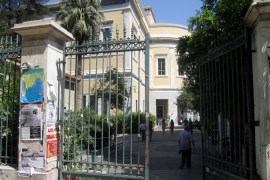 As the country casts its ballots on Sunday, many students say their country is headed in the wrong direction. 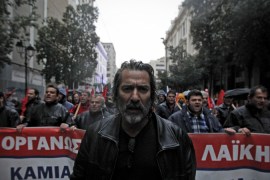 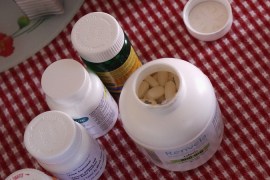