Four bombs have exploded at short intervals in the Ukrainian city of Dnipropetrovsk in what authorities said amounted to an “act of terrorism”, wounding 27 people, including nine children.

The authorities were considering how to respond “appropriately”, news agencies quoted him as saying.

“The first bomb seemed to have been placed in a rubbish bin just next to a tram stop near the opera house. That blast went off at 11:50am [08:50GMT] when a tram went by,” Al Jazeera’s Sue Turton reported from Moscow.

The second explosion came 30 minutes later next to a cinema, injuring 11 people, nine of them children, the emergencies ministry said in a statement.

The third blast followed shortly afterwards next to a park, injuring two people, it said.

A fourth blast was also heard in the city centre, but caused no casualties, the statement said.

“Nothing like this has happened before,” said resident Volodymyr Klitchko. “Dnipropetrovsk used to be a quiet city.”

Outside of the city, policemen wearing bulletproof vests and armed with Kalashnikov assault rifles stopped cars for checks.

“No-one has been detained yet,” a police spokesman said.

Authorities offered no immediate explanation of any motive or who they thought could be behind the bombs. But the prosecutor general’s office said it had launched a criminal case classifying the blasts as an “act of terrorism”.

Authorities denied local media reports that a group had claimed the blasts.

“No demands or threats from identified or non-identified people have been sent to the police,” Interfax news agency quoted Ukraine’s deputy security service chief Vladimir Rakitsky as telling parliament.

Dnipropetrovsk, 400km southeast of the capital Kiev, is one of the former Soviet republic’s biggest industrial hubs and was a key centre of the nuclear, arms and space industries in Soviet times.

The city provided a springboard for former President Leonid Kuchma, who was in office from 1994-2005, to rise to power.

Dnipropetrovsk is also the home town of Yanukovych’s fierce opponent, the 2004 Orange Revolution leader Yulia Tymoshenko, who is serving a jail sentence for abuse of power that has strained relations between Ukraine and the European Union.

Tymoshenko, 51, has been on hunger strike since last Friday and has said she suffered a beating in the prison where she is serving her disputed seven-year sentence.

Dnipropetrovsk is not a host city in the European football championship that Ukraine will co-host with Poland in June and July, but is on the route of the trophy tour that is due there on May 21.

“We have to treat the issue very seriously,” he told reporters. “Any attack in our region is something rather exceptional,
and I think we can talk of an attack at this point, while the context of the Euro-2012 makes us especially sensitive to such events.”

Bomb attacks have been rare in Ukraine. However, a similar series of explosions in the east of the country in January last year were linked by officials to an attempt to extort money.

The explosions went off as security services were conducting anti-terrorist drills at the Olympic stadium in Kiev, venue for several matches in the Euro-2012 including the final on July 1.

“I think the people who committed this brutal crime… are also accomplices to an attack on the image of our country ahead of the Euro-2012,” Ukrainian football federation head Hryhory Surkis said in a statement.

UEFA, European soccer’s governing body, said it remained confident in the Ukrainian authorities’ ability to stage a “smooth and festive tournament” despite the bombings.

The EU’s foreign policy chief Catherine Ashton said in a statement that the European Union was in close contact with Ukraine and was ready to provide assistance. 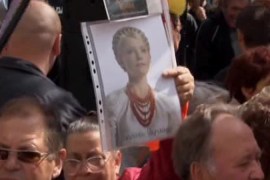 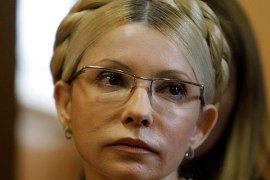 Lawyer for jailed former prime minister dismisses as untrue claims that she had paid for killing of three in 1996. 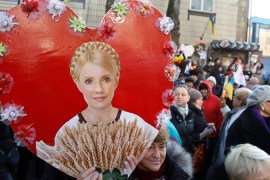