The Communist Party of Kampuchea (CPK), also known as the Khmer Rouge (Red Khmer) ruled Cambodia from April 17, 1975, until January 1979. In 1976, the Khmer Rouge established the state of Democratic Kampuchea.

The party’s aim was to establish a classless communist state based on a rural agrarian economy and a complete rejection of the free market and capitalism.

As per the Cambodia Tribunal Monitor, a group that provides information about the tribunal investigating crimes committed during the CPK’s rule:

“To accomplish this, they abolished money, free markets, normal schooling, private property, foreign clothing styles, religious practices, and traditional Khmer culture. Public schools, pagodas, mosques, churches, universities, shops and government buildings were shut or turned into prisons, stables, reeducation camps and granaries. There was no public or private transportation, no private property, and no non-revolutionary entertainment. Leisure activities were severely restricted. People throughout the country, including the leaders of the CPK, had to wear black costumes, which were their traditional revolutionary clothes.”

Public gatherings were also banned, and any form of family relationships were frowned upon.

Cambodia’s communist movement emerged from the anti-colonial struggle against France in the 1940s.

In March 1970, the country’s monarchy was overthrown by US-backed Field Marshal Lon Nol, setting up a long armed struggle against the forces of the Khmer Rouge.

By early 1973, despite a massive bombing campaign undertaken by the Cambodian government with aid from the United States, the Khmer Rouge forces controlled about 85 per cent of the country’s territory. In 1975, the capital Phnom Penh fell to Khmer Rouge forces.

Until 1977, the Khmer Rouge’s top leadership (known as “Angkar Padevat”) worked in secret, with few outside of the party aware of their identities.

The Khmer Rouge arrested and killed thousands of members of the previous government and regimes, including soldiers, politicians and bureaucrats, who they considered to be not “pure people”. This term, as used by the Khmer Rouge, meant those who were fit or capable of building the agrarian state they had set out to establish.

Over the following years, hundreds of thousands of intellectuals, professionals, members of minorities and ordinary citizens who were deemed not to conform were also killed in a systematic campaign to eliminate those deemed to be “impure”.

Many were held in prisons where they were interrogated, tortured and executed. The most famous of these prisons, S-21, held about 14,000 prisoners while in operation. According to the Cambodia Tribunal Monitor, only about 12 survived.

While figures on the number of people who died during the Khmer Rouge’s rule are disputed, most estimates say between 1.4 million and 2.2 million people were killed.

The Cambodian Genocide Project at Yale University estimates that 1.7 million (21 per cent of the population) lost their lives during Khmer Rouge rule.

In 2007, Cambodian and international co-prosecutors at the joint UN-Cambodian Extraordinary Chambers in the Courts of Cambodia (ECCC) tribunal said that acts committed between 1975-79 “constitute crimes against humanity, genocide, grave breaches of the Geneva Conventions, homicide, torture and religious persecution”.

Since then, the ECCC has worked to bring specific leaders to justice.

The verdict in Case 001, the first to be brought before the ECCC, was passed on February 3.  A life-sentence was given to Kaing Guek Eav, better known as Duch, a jailer who oversaw the deaths of 15,000 people.

Pol Pot, the party’s leader whose real name was Saloth Sar, died in 1998.

Case 001 has been split into a number of phases to ensure that judgments are passed on specific charges within a relatively short time period, owing to the ill-health of the remaining defendants.

Almost 4,000 victims and relatives of the victims are being represented collectively at the trial by a team of lawyers. 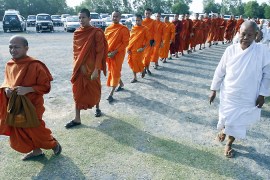 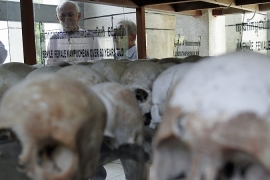 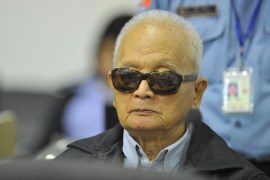