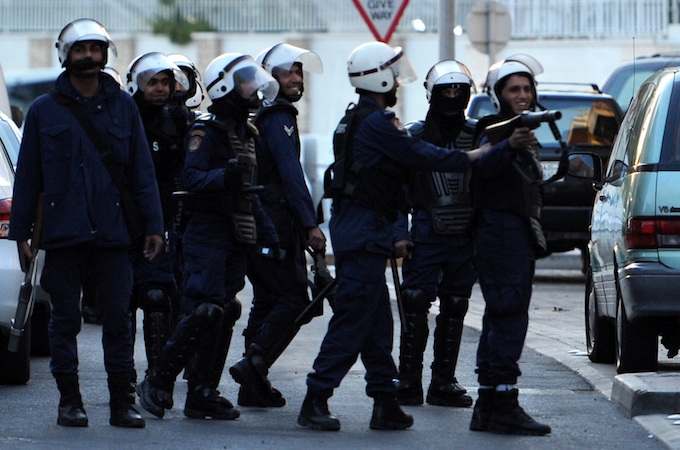 The Obama administration is pushing to close an arms deal with Bahrain, despite the government’s nearly year-long crackdown against protesters and recent steps to block American NGOs from operating in the island kingdom.

A previous arms sale was suspended late last year after fierce opposition from human rights groups and members of Congress. But the White House is now taking advantage of a legal loophole to push forward a separate deal without congressional approval.

The deal is also advancing despite the Bahraini government’s recent crackdown on several US-based NGOs, including the National Democratic Institute and Physicians for Human Rights. Staffers with valid Bahraini visas have been barred from entering the country.

Some of the organisations received letters informing them that their work was temporarily suspended, ostensibly until a national commission finishes reviewing the recommendations of the official commission which studied last year’s unrest.

“The commission’s deadline to complete this work is by the end of February,” said the letters, which were signed by Houda Nonoo, Bahrain’s ambassador to the United States. “We therefore feel that it would be more beneficial for a visit from your esteemed organisation to take place after this date.”

Several of the organisations had issued critical reports on human rights abuses and restrictions on political freedom in Bahrain, where more than 40 people have been killed and thousands arrested during nearly a year of unrest.

“It’s ironic that there’s not much discussion of this, considering what’s happening in Egypt right now,” said Stephen McInerney, the director of the Project on Middle East Democracy, referring to a similar (though harsher) crackdown on American NGOs in Cairo.

The new arms sale, which was first reported by Josh Rogin in Foreign Policy, takes advantage of a legal loophole which allows the administration to make small sales – less than $1mn – without congressional approval. So a larger package could be broken into individual sales, each below the million-dollar threshold, to avoid notifying Congress.

The package will include patrol boats, communications equipment, and spare parts for helicopters and fighter jets, according to the US State Department, which insisted that “none of these items can be used against protesters.”

“Examples of what we are providing include spare parts and contractor maintenance support for existing F-16s, helicopters, and communications equipment. It includes items such as patrol boats for maritime security and support services for training Bahraini troops who are supporting coalition operations in Afghanistan. It does not include any new capabilities, nor would it include internal security items, such as small arms or tear gas.”

“It does not include any new capabilities, nor would it include internal security items, such as small arms or tear gas,” a department spokesman said in a statement to Al Jazeera.

But some of the items in the proposed sale have indeed been used against protesters. Bahraini security forces routinely use helicopters to monitor demonstrations, for example, and activists say footage from those helicopters is sometimes used to identify and arrest participants.

The official report of the Bahrain Independent Commission of Inquiry (BICI) mentions at least three occasions on which military helicopters were deployed to monitor protests.

This latest deal is separate from an earlier proposal to sell Bahrain more than $50mn worth of weapons, including 44 Humvees. Those armoured vehicles have also been used against protesters on numerous occasions.

The administration has temporarily suspended that deal, though it can finish the sale at any time, because members of Congress did not file formal objections during the 90-day “notification period.” Congress could have blocked the deal during that period by passing a resolution of disapproval.

Lawmakers could still block the sale by passing a new law restricting arms sales to Bahrain. Legislation introduced in the Senate by Ron Wyden, a Democrat from Oregon, and a similar bill in the House of Representatives proposed by Jim McGovern, a Democratic representative from Massachusetts, would do just that. But it’s unclear when either bill will come to a vote.

The new package currently under consideration is smaller, though the State Department would not release an exact dollar figure.

The US has sold millions of dollars worth of weapons to the Bahraini government over the last five years, making it one of the kingdom’s two largest suppliers, according to a report released in October by Amnesty International.

A ‘stamp of approval’

The Bahraini government has taken a few halting steps to implement the BICI report’s recommendations. King Hamad bin Isa Al Khalifa announced a package of modest constitutional changes last month, and the kingdom has hired several former American police chiefs to consult on reforms – though at least one of them has a controversial history.

But there is little progress on more substantive issues. The report called for Bahrain’s security forces to stop torturing people, for example, but detainees continue to report brutal treatment while in custody. An 18-year-old died in police custody last week, and opposition leaders say he was tortured.

Meanwhile, the government has implemented at least a temporary ban on a number of foreign NGOs. Richard Sollom, the deputy director of Physicians for Human Rights, was barred from entering Bahrain when he landed in Manama in early January, despite having a visa and what the organisation said was a standing invitation from the Bahraini government.

Sollom was travelling to Bahrain to monitor the trial of 20 medical staff arrested for treating anti-government protesters last year.

“We had a longstanding relationship with the foreign minister, who assured us on several occasions that we were more than welcome to enter the country and do our work,” said Hans Hogrefe, the group’s chief policy officer.

Staffers from the National Democratic Institute, a Washington-based group, were also turned away at the airport at least three times over the past few months, according to Les Campbell, the group’s Middle East director. “They insist that we’re not officially banned, but they don’t let us into the country, so the difference is really semantic,” he said.

It’s unclear why the Obama administration is pushing so strongly to close these arms deals with Bahrain. The weapons are hardly necessary for external defence, because the sprawling US naval base in Manama provides Bahrain with security.

“I think the argument might be, there are elements within the Bahraini government we have a relationship with, and this is how we preserve that relationship and steer them toward reform,” said McInerney, trying to explain the administration’s rationale.

Victoria Nuland, the State Department’s spokeswoman, said last week that the US would “use our security assistance to reinforce reforms in Bahrain.” But human rights groups have warned the sale could be perceived by the Bahraini government as a “stamp of approval,” a sign that their token reforms to date are a meaningful step.

“The administration is not violating any laws. Everything is above-board,” Hogrefe said. “But we’re very concerned about the signal that sends. How is that going to be perceived by the Bahraini government, and of course by the opposition?”