Khaled al-Khani was just seven when he lost his father in the city of Hama during what residents say was the worst massacre in Syria’s modern history.

Today, as the uprising against President Bashar al-Assad grips the country, men like Khaled are finally starting to discuss the grisly events of 1982, as protests slowly force open the veil of fear and secrecy which surrounded the killings.

“The fact that Syrians will commemorate the killings of their loved ones for the first time in 30 years evokes in me strange feelings. It is not a celebration, but it cannot be mourned like a funeral,” Khani, who is now a celebrated Syrian artist, told Al Jazeera.

Activists are planning countrywide demonstrations to commemorate the atrocities. Khani, who now resides in France, will be speaking at a commemoration event in Paris. Similar events planned by Syrian expatriates are set to take place in Washington DC, London, Riyadh, and other cities.

It was February 2, 1982, when troops, ordered by the late President Hafez al-Assad, Bashar’s father, seized the city, and bombed its centre with fighter jets, according to an Amnesty International report, enabling tanks to roll through Hama’s narrow streets, crushing an armed rebellion by an estimated 200 to 500 fighters from the Muslim Brotherhood’s military wing.

The subsequent 27-day military campaign left somewhere between 10,000 to 40,000 people killed and almost two thirds of the city destroyed, according to human rights organisations and foreign journalists who were in Syria but were not allowed to enter the city.

Almost every family in Hama, which at the time had about 250,000 inhabitants, lost a member.

“The Taleea [the Muslim Brotherhood’s military wing] had tried to resist and clashed with the government forces but was crushed in few days. The Baroudiyeh neighbourhood, where the Taleea was based, was overtaken by the army just hours after the military campaign was launched,” said Abou Tamim, a member of the Muslim Brotherhood, who fled to Saudi Arabia amid the 1982 crackdown.

“But the campaign continued for days and most of the dead were civilians who had nothing to do with the Brotherhood,” he told Al Jazeera.

Khani’s father was one of them. An eye doctor educated in France, he was taken by security forces to a porcelain factory where his eyes were torn out of his face. He was left to die in pain, Khani said. Tens of others in the factory-turned-detention centre were killed in various ways.

Khani says if he had publicly accused the government of killing his father in the years since his death, he could have faced the same fate. He and many other residents were forced to say that Muslim Brotherhood fighters had killed their loved ones.

“Assad wanted to punish the whole of Hama. Through us, he wanted to teach all Syrians that challenging the regime would lead to this. And it worked. It worked for 30 years.”

The fear of Hama’s residents to even mention the massacre began to falter when anti-government protests erupted across the country last March.

The first protest in Hama in 2011 came out from the Omar Bin Khattab Mosque near Hama’s castle. People chanted for freedom and the fall of the regime, the first serious challenge to the Assad dynasty in decades.

That same mosque is where, Khani recalls, he and his mother and siblings took refuge, along with other families, during the first few days of the military campaign in 1982.

The mosque turned into a detention centre. Women and children were separated from their fathers, husbands and brothers. A day and a half later, a soldier shouted from behind the mosque’s gate: “Do not expect to see your men when you are out.” He was right.

Khani said he and what is left of his family later managed to flee to a nearby village where he finished his first semester at a school.

“When I went back to my old school in the second semester, I remember that all my classmates had also lost their fathers. There were two or three exceptions,” Khani said.

Abou Tamim said some neighbourhoods were completely destroyed and at least 80 mosques were demolished.

When the military campaign was over, Hafez al-Assad declared that “what has happened in Hama has happened, and it is all over.”

But Khani said it was anything but over.

“Taking people to the notorious Tadmour prison and executing them there continued until 1986. The mukhabarat [members of the security intelligence] continued to come to our house for many years later,” Khani said. “Regular security check-ups and investigations of young men by the Mukhabarat continued well into the 1990s.”

One of the ugliest phenomenons that haunted the city afterwards were the packs of wild dogs roaming the streets, he said.

“Because many dead bodies were left on the streets for many days before the families could leave homes to bury them, dogs had eaten some of the dead bodies.

“The dogs would come at night to attack people, just like in movies. The municipality of Hama struggled for two years to rid the city of these dogs.”

Khani said the regime intentionally wanted people to suffer after the events of Hama. He said the disappearance of more than 20,000 people whose fate remains unknown was documented.

“The regime wanted to keep people in a constant waiting mode. They wouldn’t tell families if their loved ones they took were dead or alive.”

One woman who is still waiting to hear what happened to her family is 40-year-old Umm Baraa, residing in Hama.

She says her two brothers, 17-year-old and 22-year-old students, were dragged out of their home by security forces for allegedly being Muslim Brotherhood sympathisers.

They still have not returned home and she has not heard any news about them since they disappeared.

“We asked former prisoners if they have seen them but to no avail,” Umm Baraa told Al Jazeera.

Residents say officials capitalised on the eagerness of residents to be reunited with their loved ones or even just receive information about their whereabouts.

“Yehya Zeidan, the head of the military intelligence branch in Hama, was one of the most loathed officials in the city,” Rami, a 50-year-old Hama resident, who didn’t want to give her/his last name, told Al Jazeera.

“He asked for fortunes simply to reveal the fate of a detained person or to grant people a few minute prison visitation.

“And sometimes people gave him money but did not get anything in return.”

Umm Baraa is one of them. She and her 75 year-old mother still hope their children will return one day.

Her 24 year-old newphew, Manhal, who sits next to his aunt as she wipes her tears, says he feels that he has a responsibility to rid his country of the Assad regime.

He is a prominent activist in Hama who organises protests and documents human rights violations in his city.

The crackdown on anti-government protests that erupted in Hama recently has reportedly led to the deaths of at least 513 people there.

“Throughout these past 30 years, nothing healed some of our pain more than the protests we saw in the streets in this uprising,” Khani said.

“When all of Syria’s residents went out to the streets and chanted against the regime, Hama began healing because it was no longer alone.”

But the wound will never vanish, he says.

“I will only reconcile with the regime who extracted my father’s eyes when they give me back his eyes so I can bury them with my dad’s body.” 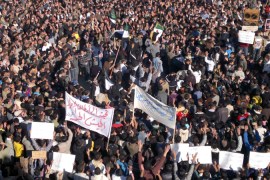 Fate of Arab League-backed Security Council resolution in the balance as scores are reported dead in fresh violence.