The musty smelling halls, worn carpets and perpetually locked bathrooms of the Alba hotel in Caracas could be seen as a metaphor for government “expropriation” gone awry in Venezuela’s era of “21st century socialism”.

Built on state land by a previous government and leased to foreign operators, the administration of President Hugo Chavez refused to renew the Hilton’s operating license for the 36-story property back in 2007, taking it over and rechristening it the Alba hotel.

Other Hilton properties, including a landmark casino hotel on Margarita Island, were also nationalised. “The owners tried to impose conditions on the revolutionary government [whenever we tried to host conferences there],” Chavez said of the Hilton. “No way… Now it’s been expropriated.”

Despite owning the hotel, today the government rarely holds its events there, a translator who frequently works during official functions told Al Jazeera.

“Now they have taken it over, but the service is terrible, so they hold their events elseware. It’s ironic,” said the interpreter who didn’t want his name used for fear of professional reprisal.

During a rally supporting Chavez on Thursday, guests wearing red socialist t-shirts emblazoned with the leader’s face sat at the hotel’s bar drinking beer, while others watched from balconies as hundreds of thousands demonstrated in the streets below.

“If we want to move from capitalism to socialism then companies must be transformed from the hands of private people to the workers,” Rafael Calles, the mayor of Guanare in Venezuela’s west told Al Jazeera as he watched the march with his friends.

Standing beside two single beds in a dowdy room on the 15th floor, Calles and his colleagues from Portuguesa State, a bastion of government support, are looking forward to the next wave of expropriations if Chavez wins Sunday’s election.

“The government will keep an eye on monopolies and big landlords,” Calles said. “They shouldn’t be able to control huge tracts of land or strategic sectors.”

From 2002 to June 2012, the government nationalised 1,162 companies, according to the Venezuelan Confederation of Industries (Conindustria), a business lobby group.

Fifteen enterprises were expropriated from 2002-2006, the group said, but from 2007 onwards the number of seizures increased to 1,147.

Food companies and firms in the energy sector are the most likely to face expropriation if they don’t deliver what the public wants, the mayor said.

Western oil companies, including Exxon and ConocoPhillips, have had their assets nationalised and court battles continue over how much they should be compensated.

The business press in Venezuela and abroad has screamed about the nationalisations as part of the “road to serfdom”. And some of the properties, including the Alba hotel, have seen quality drop since they were taken over.

But Chavez supporters say new forms of social organisation are improving the economy and community well-being. 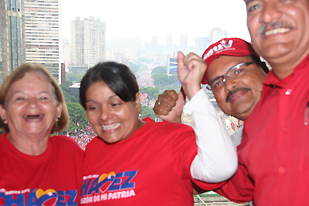 “Companies taken over by the government are often given to the workers,” Calles said. In his district, a factory making spaghetti noodles was expropriated and the workers now run the company, mixing communitarian philosophy with the market.

When Guanare decides its annual expenditures, 70 per cent of the money is allocated to a “participatory budget” where citizens can directly decide on what projects should be funded, the mayor said.

“We have problems with heavy rain in our district, so we provided machinery so people could fix the roads and sidewalks,” he said. “Local people are fully responsible for running the machines and organising the operations.”

When people had a chance to participate in the city’s budget, they opted to form a “roads council”, he said. The city opened an asphalt processing plant and the citizens’ council determines what roads need to be paved.

Critics say this “participatory” model allows the governing party to allocate public resources to its supporters at the expense of other citizens.

Guanare has also been the site of Chavez’s “multi-polar” vision, as Iranian investment has come into the area. Factories producing sodas, cardboard boxes and milk have been opened by Iranian firms in the area, as part of the “transformation to socialism”, Calles said.

But many are unhappy with the changes. Adriana Vigilanza, a former councilor to the National Assembly, said many of the actions taken by pro-Chavez legislators are unconstitutional and undemocratic. “Our constitution clearly states that the nation is a decentralised state, not a communal one,” she told Al Jazeera.

“Chavez changed our social economy to become a communal economy.”