His ill wife, covered in a blue burqa, leaned against a mud wall in the distance behind him.

A heavy gush of dust swept towards the man, forcing him to raise his left hand and cover his eyes. After begging one more time in vain, he slowly turned around and walked away.

He had failed his chance to send his wife to Fayzabad, the capital of the Badakhshan province, for treatment. It would be months, if at all this year, until government helicopters return to this rugged part of the country.

Now the couple had to take the expensive two-day journey on the bumpy, narrow road recently carved along the mountains and walk part of the way.

As recent as two years ago, the journey took up to 9 days by foot.

“Imprisoned by nature,” as one elder described their own state, the people of this northern Afghan province are only feeling the benefits of the decade long international presence now, as the flow of hundreds of billions of dollars has been very slow to trickle down to these isolated parts of the country.

In many of the far-flung districts of Badakhshan, residents are yet to achieve their demand for the most simple and basic need: a road.

But initiation of the work on portions of a ring road, designed to connect up to eight districts with the provincial capital, has rekindled their hopes. Even if the international community turns its back on Afghanistan with the withdrawal of foreign troops scheduled for 2014, at least they will get a road, residents say.

“We don’t want food – we don’t want aid. All we are asking for is a road – because our sick die here and we can’t take them to Fayzabad,” one elder said.

“It’s the first time a car is passing through here,” said Dr Najmuddin, in charge of the provincial office for the Agha Khan Development Network, one of the donors for the road construction. He was referring to a bridge that connected Nesay with its neighbouring district.

“Before this, the people walked for up to 14 days to reach Fayzabad. On the way back, because they brought groceries and such, the trip would take them up to three weeks.”

The design for the ring road has existed for decades, according to engineers working on the project. Because of the mountainous nature of the terrain, and decades of civil war, the project only began to materialise in the past five or six years.

At the heart of the implementation has been a decently successful government initiative called the National Solidarity Programme, which creates local councils at district level and tasks them with prioritising and carrying out development projects.

By contracting these local councils – and private construction companies – about 300km of the 600km road has been built.

The work for another 104km is under way – being implemented by five construction companies and 21 local councils – for about $5m.

“We don’t have a financial or budgeting issue,” Wais Barmak, the new minister of Rural Rehabilitation and Development, told the gathered people in Nesay district. “We just want to contract it to a well-equipped company. Otherwise, if we hire the locals, you will just sweat in vain.”

But what minister Barmak did not explain was why, under his predecessor, the work had stalled.

Due to a lack of capacity, the Afghan government in the previous year failed to spend more than 40 per cent of its development budget.

The work on the Badakhshan road project was also stalled due to this. In 2011, the province’s MPs allocated money – roughly $5m – for the road project in the development budget, but the previous minister could not spend it.

“The development budget is spent based on the needs of the people – and there was clearly an urgent need for the road,” said Fawzia Koofi, an MP from Badakhshan.

“The people kept coming to us and asking about the road and the minister could not get his plan together.” Koofi and her fellow MPs had to threaten a vote of no-confidence against the minster to get him to send his team to the province and begin the work.

The road built so far is basic, mostly gravel carved on the side of the mountain. The access is seasonal, limited to 8 or 9 months a year, as avalanches close parts of it off during the harsh winter.

As foreign aid dwindles, the Afghan government needs to be more efficient in its construction projects, analysts and officials say.

Currently, paving roads cost on average $1.5m per kilometre, according to Ashraf Ghani, a former finance minister in the federal cabinet.

Even in the rudimentary work of carving roads, as in Badakhshan, the costs can be reduced, field engineers say.

“The local councils get a lot done with little money – for private companies, it is the other way around,” says Humayoon Rahmani, engineer in charge of the road building project in the province.

“The companies often refer back to the locals – because they feel helpless, they are not prepared for the terrain.”

The minister of rural rehabilitation agrees that the local councils are more efficient with the money and says it is his government’s priority is to task the locals with building the road.

“That way, it creates local jobs, strengthens the local economy because the money is in circulation right there.”

“But we have to hire companies at certain points – because the 90 degree rocks require equipment that the locals don’t have and it’s above their capability.”

At least 9 workers have lost their lives on the project in the past five years – either due to drowning or falling rocks – indicating the difficulty of working on such terrain.

But for the villager who wanted to take his wife to the provincial capital for treatment, the need for the road was more urgent and more basic.

As he walked away from the helicopter heartbroken, he could see Tajikistan in the distance – its roads neatly paved, its electricity wires powering the square houses. Perhaps, he could even see a clinic. So close, yet so out of reach for him.

“So far, none of our sick have been cured on the other side of the border,” said Parwiz Khan, the governor of neighbouring district, Mahmay. “If we try to enter without a visa, they will jail us for five years.”

So they are stuck here, awaiting another winter – another streak of avalanches. The road, if it is ever completed, could be their only hope. 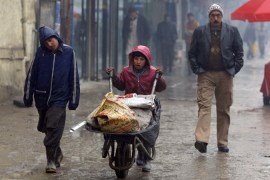 Afghans fear being left out in the cold

Spectre of hunger and death looms as Central Asian nation prepares for harsh winter in the months ahead. 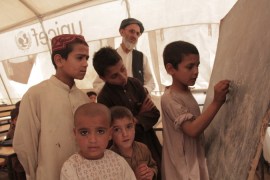 Despite a reinvigorated desire for learning in southern Afghanistan, the region’s education statistics remain damning. 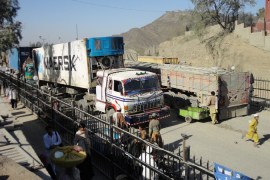