In January, Brian Dooley, of the US-based organisation Human Rights First, was preparing for his fourth trip back to Bahrain since the uprising began in February 2011. Dooley told Al Jazeera that he had never previously had any problems entering the country.

“About a week before I was going, I got a letter saying: ‘Do not come,'” Dooley said.

Al Jazeera obtained a copy of the letter – sent by the Ministry of Human Rights – which asked Dooley to wait until after the end of February, by which time a national commission on implementing recommendations from the government-sponsored Bahrain Independent Commission of Inquiry (BICI) would have finished its work.

“People are bracing for something serious and probably bad to happen in the middle of February,” Dooley told Al Jazeera by phone from the US.

February 14 marks the one-year anniversary of the popular uprising against the Gulf island’s monarchy, and activists are again calling for nationwide protests to commemorate the date.

“There are likely to be some very large scale protests, and it doesn’t look like the government has figured [out] any way to police protests other than the very old way of attacking them,” Dooley said.

“[The government] has never not let me in before, so why haven’t they let me in now?” asked Dooley. “You can only assume it has to do with them wanting to hide something.”

Freedom House, another US-based non-governmental organisation, received a similar letter, while Richard Sollom, the deputy director of Physicians for Human Rights, was denied entry when he arrived at Bahrain’s airport in January.

It’s a policy that seems to not only be limited human rights monitors, but foreign journalists as well.

When martial law began in mid-March last year, many local journalists were arrested or forced into exile, and most foreign journalists inside Bahrain were asked to leave. Since then the government has not had a consistent policy with granting visas, often offering media credentials valid for only a few days or denying entry altogether.

When Al Jazeera recently applied for media visas to report from Bahrain for the one week surrounding the anniversary, it received a letter stating: “Due to the high volume of applications we will not be able to grant your visa for the specified dates.”

New York Times correspondent Nick Kristoff Tweeted on Wednesday: “Bahrain is keeping out journalists generally, not just me, to have a freer hand cracking down.”

The Information Affairs Authority (IAA) did not respond to Al Jazeera’s request for comment, but its Twitter account confirmed that some media organisations “were asked to delay their visit”.

“This is done to insure [sic] journalists’ safety & chances of securing interviews with key figures,” the IAA wrote on its Twitter account.

The IAA went on to list a number of media outlets that would be allowed access Bahrain, including the BBC, Financial Times and news agencies such as Reuters and Associated Press.

However, the Agence France Presse (AFP) news agency reported on Wednesday that it would not be allowed to enter. “Bahraini authorities have rejected a visa request by AFP to cover the first anniversary of the pro-democracy Shiite-led protest that was brutally crushed,” the AFP reported.

Correspondents from other media outlets such as the New York Times, Wall Street Journal, Christian Science Monitor, and the UK’s Channel Four, have all reported that their applications were denied.

While denying entry to visit its home, Bahrain’s government is also going on the offensive by hiring western public relations firms to help polish its image abroad.

At the end of January, the UK’s Guardian published an opinion piece on its website titled: “Bahrain has failed to grasp reform – so why is the grand prix going ahead?” The article, co-authored by the Bahrain Center for Human Rights’ Nabeel Rajab and John Lubbock, called on the FIA – the governing body of Formula One – to cancel its race at the Bahrain International Circuit (BIC), scheduled for April, until the government “stops violating human rights in the country”.

The article went on to accuse the BIC’s chief of security of torturing staff, and hours after being published was mysteriously removed by the Guardian and replaced with a note saying: “This article has been taken down on 30 January 2012 pending investigation.”

Shortly after that, Lubbock tweeted: “Apparently the Guardian are being threatened by a Bahrain PR firm over some accusations we made today of torture at the BIC.”

The Guardian did not respond to Al Jazeera’s request for comment, however, Lawrence Jones of the London-based PR firm Dragon Associates did.

“There are considerable inaccuracies that we’ve pointed out to [the Guardian],” Jones told Al Jazeera, confirming that the article was then removed. When asked if the Bahrain government was a client of Dragon Associates, Jones said that the firm was under contract with the BIC since “a few months ago”.

Ironically, the Guardian’s Comment Is Free editor Brian Whitaker has been consistently documenting the Bahraini government’s contracts with a number of western PR firms in attempts to clean up its image. On his blog, al-bab.com, Whitaker has meticulously documented the relationship between Bahrain and PR firms such as US-based Qorvis Communications.

Whitaker reported that Tom Squitieri, a former USA Today reporter who resigned after reportedly lifting quotations from other newspapers without attribution, was hired by Qorvis as an “analyst” in September and shortly thereafter penned a number of opinion articles in support of the Bahrain regime on the popular Huffington Post website, and Foreign Policy Blogs.

Qorvis, which disclosed in a US Foreign Agents Registration Act a $40,000/month contract with the government of Bahrain from April to September last year, is one of a number of western PR firms that have been hired by the government. Matt Lauer, a partner at Qorvis, wrote in an email to PRNewser in August: “We help communicate the positive work the government [in Bahrain] is undertaking.”

Writing in December in Salon.com, journalist Ken Silverstein outlined in an article titled, “How Bahrain works Washington,” just how US public relations, or lobbying, firms are put to use by both foreign and domestic clients. One tactic, Silverstein writes, is by “influencing the media and public opinion by hiring American opinion-makers to mouth their talking points”.

When government crackdowns on uprisings began in Tunisia and Libya, US-based PR firms Washington Media Group and Monitor Company Group terminated contracts with their respective clients. And Egypt’s ruling military council that regularly used violence against protesters was ditched by its Washington lobbyists, the PLM Group, in January.

However, in Bahrain, the PR companies have remained loyal. Chan’ad Bahraini, a popular blog focusing on Bahrain, has compiled a list of ten PR firms hired by the Bahraini government since the crackdown began. Unlike their colleagues in Tunisia and Libya, none appear to have yet abandoned the government in Bahrain.

In recent months, the PR offensive seems to be on the rise, as the government tries to keep hold of not only the Formula One race, but also a $53 million weapons contract with the US that has been delayed, thanks to efforts by Senator Ron Wyden of Oregon and representative Jim McGovern of Massachusetts.

In a phone-in press conference with reporters on Monday, McGovern said that since the release of the BICI report, “Bahrain’s government has taken only limited steps at [improving] human rights. And I think, by all accounts, it has not done nearly enough to justify any US military sales to Bahrain.”

“We need to make it clear that we’re not going to have a normal relationship, that it’s not going to be business as usual if the human rights abuses continue to occur,” McGovern added.

On Saturday, two US human rights activists were arrested at a protest in Bahrain’s capital, Manama, and deported the following morning. On Monday, the ministry of interior announced that nationals of countries that required Bahrain nationals to obtain visas ahead of time, would face a policy of reciprocity and no longer be eligible for visas on arrival, if they had been previously.

After many local journalists who had reported on or taken part in the February 14 uprising were arrested or forced into exile, Reporters Without Borders ranked Bahrain 173 out of 179 countries for press freedoms in 2011. However, supressing the narrative of crackdown on a mostly unarmed pro-democracy uprising has been difficult for the government, with social media-savvy activists armed with mobile phones and other recording devices. Videos and pictures documenting police repression are uploaded to sites such as YouTube, Twitter and Facebook on an almost daily basis.

With the uprising’s one-year anniversary on Tuesday – and protests already happening across the country – it is unlikely that efforts to distance the country’s rulers from what has recently become a familiar image of a regime willing to hold on to power, at any cost, will be anything but an exercise in futility. 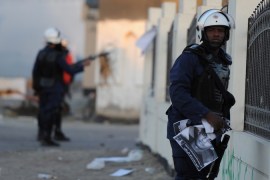 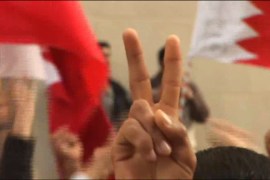 Bahrain protests grow ahead of anniversary 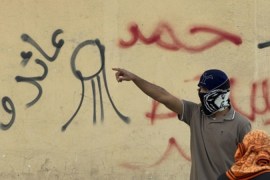 Bahrain protesters rally ahead of anniversary

Activists say will continue tp press their demands as they prepare to mark first anniversary of protests on February 14. 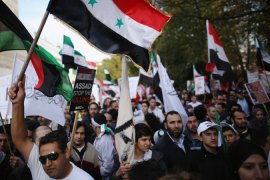 A look at how embattled Arab governments have employed the services of Western PR companies to clean up their image.