Kabul, Afghanistan:  A United Nations report released on September 28, said incidents of violence in Afghanistan have increased by nearly 40 per cent in the past eight months. Complex suicide attacks made up a greater portion of the violence, the report said.

The disguise remains the same, but the tactics have changed: they pick their targets precisely, arrive armed to the teeth, and fight until the last bullet. Only then do they blow themselves to pieces. The rapid evolution of such attacks has made the war increasingly more asymmetric, as the Afghan police – ill-equipped for fighting an enemy determined to die – struggle to contain the phenomenon.

This new spate of enhanced suicide attacks has received the obvious criticism by security officials, labelling it an act of great cowardice, however this is not the consensus view.

Reflecting the viewpoint of certain sectors of society, the attacks are seen as a legitimate guerilla tactic. A according to a former Taliban official “One side ties one or two kilos of explosives to its body, the other side drops tonnes of explosive from sky … These attacks are the only thing that has brought some fear to the foreigners.”  Pressed on the devastating impact of such attacks on civilians, he said, “This war is amongst the people. American’s say Taliban hide between civilians. Taliban claim the same.”

Whatever the interpretation, the attacks are devastating, with many civilians losing their lives.

One Swallow doesn‘t make a summer

On June 18, three gunmen wearing army uniforms, walked into the District One police department, located in one of the city’s most crowded markets, the mandawai. They shot the police officer on duty outside the gate and barged in. As a fierce gun battle broke out, fuelled by fear, the market was emptied in seconds as customers and vendors alike ran for their lives.

Inside the compound, “We spotted the attackers and shot one in the eye,” said Lt Colonel Sultan Jan Shinwary, commander of the District One police department. The second attacker, he said, was also gunned down a few steps further in. But a third one resisted, hiding in one of the buildings where he took several civilians hostage.

The police in the department engaged him for about an hour from outside the building, before he detonated and killed himself and five civilians.

“He was armed for a long fight, but we did not give him time, we engaged him and shelled him, so he blew himself up,” Shinwary said. “There was help ready outside, but we told them to wait, we had the situation under control.” Among the nine dead in the attack, Shinwary lost two men. Both were between the ages of 22-25, each leaving behind a young family.

The gun-fight was brief, the operation considered successful – as it was contained locally by the police force without the aid of NATO or Afghan Commandos. However, the phenomenon has since developed into an almost unmanageable crisis.

Since June, Afghan police in the capital have faced three other similar attacks for which the Taliban have taken responsibility.

Most recently, on September 13, six gunmen took-over a building near the city’s diplomatic quarter, shelling rocket-propelled grenades at the US embassy and NATO headquarters nearby.

That night, Kabul went to sleep under a heavy rain of precipitation and gunfire, with loud explosions being heard in the city’s most affluent neighbourhood. At least three police officers were killed during the attack, including one who wrestled a suicide-bomber to prevent him from entering a crowded area.

“Ten years ago, there was no such a thing in the country as the police, everything was gone” said Kabul police chief, General Ayub Salangi. “Every day, we make progress, every day our capacity increases.”

It’s the constant adaptation and determined nature of the enemy that makes policing them extremely difficult.

“These are modern guerrilla tactics, employed by terrorist groups such as Haqqani and others,” says Javed Kohistani, a Kabul-based security analyst.

“In the past, there were claims that the suicide bombers were drug addicts and that they blew themselves up in random places. But now, in most of the cases, they chose their targets with precision. They come armed and determined to fight to their last drop of blood.”

But Kabul’s chief of police views the phenomenon differently.

“I believe one hundred per cent that suicide attacks have turned into a mafia, hundred per cent,” Salangi said in an interview at his office. Tribute posters to the fallen policemen were scattered throughout the hallway.

“They take advantage of some poor people in the borderlands between Afghanistan and Pakistan. They are using such poor people to advance their goals.”

Such a theory may hold true in the South of the country, where the drug trade and tribal rivalries are rife. For example, six separate “suicide attacks on a provincial level anti-narcotics officer” were carried out in a span of two years, according to an intelligence officer.

But in urban areas such as Kabul, even positing the theory according to Kohistani is simply an attempt to shirk responsibility.

“The important question that security officials need to answer is this: how did the fighters manage to bring in so many weapons into the most protected area of the city, where there are checkpoints in every corner?”

Under resourced and over-strained

For an average salary of $200 a month, in the past 16 months at least 1,800 policemen have lost their lives across the country, according to statistics provided to Al Jazeera by the country’s ministry of interior. That’s close to four policemen a day.

Many of the casualties have been due to roadside bombs and firefights, but suicide attacks have also played large part.

“The police has lost more casualties than any other government force in this war,” says General Salangi. “It is because they are so spread out, everywhere – as the society demands.”

The police’s task, says a General Hadi Khaled, a veteran security official and a former deputy minister of interior, should not be fighting a counterinsurgency, something they are currently doing.

“We need to prevent such attacks by stepping up our intelligence and acting upon such intelligence,” said the General.

“It is not for the police to chase down terrorists, they are meant for supporting the judiciary and law and order.”

And even for the purpose of law and order, the police are under resourced, without adequate training and appropriate technology. Last August, a US audit found DynCorps International, the firm contracted to provide training for the Afghan police, fell 60 per cent short of their commitments.

Take Kabul’s District One, for example, where the police have 18 checkpoints. The entire department has a staff of 320 policemen and officers for an area with 192,000 residents. In addition to the residents, “At least a million people go in and out of this market daily,” lamented Shinwary.

“Our [number of] personnel is small, but we cover a large area” he said. Ideally, they need at least double the numbers to secure such a large, crowded area. “At night, when I go to check on some posts, I see my guys tired and sleepy. I feel for them, because I understand they are doing shifts longer than they should be.” In the previous month, Shinwary said, he had gone home to his family for only two nights, that too after 10pm.

General Salangi laments the lack of adequate technology, a situation that has left his charges prone to further attacks.

“How many large vehicles enter the city gates in day? At least 2,000. We have got about 50 police at every city gate. Do you think they have the ability to unload every truck and search thoroughly to make sure there are not explosives or weapons?

“We need technology. We need equipment. We need to search them by X-rays, and so far we don’t have that.”

“Who are we fighting?“

On August 19, Afghanistan’s independence day, the police battled fighters holed up in the British Council for almost eight hours. “One of my boys got a bullet in the head. But another jumped up to take his place, and then another and another,” said General Salangi, who was present at the scene.

Meanwhile, President Hamid Karzai and his senior ministers arrived at the Defense Ministry to lay a wreath at the monument of Amanullah Khan, the king who led Afghanistan to independence.

In his brief statement, the president did not make a mention of the police engaged in a fierce fight just a couple miles away. Instead, he once again extended a hand of peace to the Taliban.

“There is a difference of opinion between the top leadership of the government and those in the lower ranks about who the enemy is,” says analyst Kohistani.

At the lower ranks, he says, there is a feeling of fighting against the “Taliban and groups sponsored by the Pakistani military intelligence”. But at the top leadership, there’s a policy of trying to get closer to them.

“The fact there is no clear definition of the enemy-our forces don’t know who is friend and who is foe—has huge psychological impact on them.” 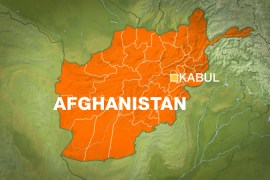 Deadly shooting at US compound in Kabul

Afghan employee opens fire at US compound, said to contain CIA base, killing one American citizen and injuring another. 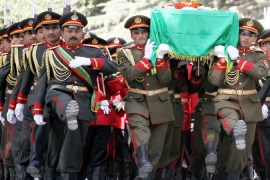 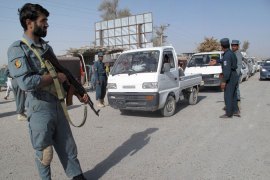 Taliban claims responsibilty for attack near police headquarters in Lashkar Gah in which at least two people died.