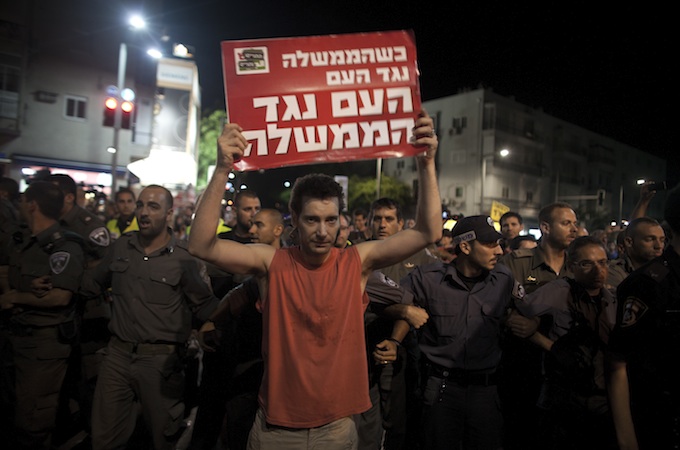 The protests sweeping Israel this summer are striking not just for their size but for their politics: 300,000 people demanding social justice on the streets of Tel Aviv and other cities makes the Israeli left seem like a viable political force again, perhaps for the first time in years.

“The left here was all but dead,” one protester said, a common sentiment in interviews over the last few days. Its formal institutions, after all, are moribund. The Labor party broke apart earlier this year, and until recently it was an uneasy member of Binyamin Netanyahu’s right-wing coalition; Kadima, Israel’s other main centre-left party, has had little influence since 2009, and its leader, Tzipi Livni, has been nearly invisible.

And so the protest movement was born out of frustration: with a seemingly ineffective opposition, and with an array of attacks on left-wing groups, such as the so-called “NGO bill” that would have authorised investigations into liberal human rights groups.

“Kadima not only said nothing about it, but in some cases they participated in the attacks on groups with leftist ideas,” said Ran Cohen, the executive director of Physicians for Human Rights. “Kadima is not an opposition party.”

The left’s sudden return to politics has, in turn, led some commentators to speculate that protesters might broaden their focus beyond purely socioeconomic issues – that they might agitate for equal rights for Israeli Arabs, or push for an end to Israel’s occupation of the Palestinian territories.

Those issues were visible at Saturday night’s massive rally in Tel Aviv, attendees say, though far from the focal point of the protests. People waved Palestinian flags, chanted “end the occupation”, and carried posters with slogans linking Israel’s occupation to the broader demand for social justice. The “1948” tent on Rothschild Boulevard houses Palestinian and Israeli activists who argue for Palestinian rights. It was attacked on Sunday by nationalist Jewish extremists belonging to a Kahanist group.

But for all those efforts, activists do not expect the protest movement to speak out loudly on the occupation or social justice for Palestinians. Organisers are reluctant to touch the issue, they say, because of fear that it will divide a movement which so far has almost universal support in Israel.

Israel’s occupation of the Palestinian territories may at first seem unrelated to the protests, which have focused on socioeconomic issues inside Israel – skyrocketing rents, the high cost of living, social services and the like. 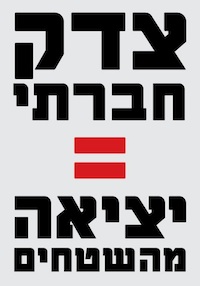 Activists tend to make two arguments for connecting the two. One is moral: A movement that wants social justice for Israeli Jews should demand the same for Israeli Arabs, and for the Palestinian people, they argue.

The other argument is more pragmatic. Israel’s ongoing occupation of the West Bank is expensive, and activists argue that those resources could be better spent on social programmes inside Israel.

Settlers, after all, receive benefits – such as subsidised mortgages and tax breaks – not unlike the ones protesters are demanding.

The government spends at least 2 billion shekels ($570 million) per year to subsidise life in the settlements, according to the Israeli group Peace Now. The Adva Center, a think tank in Tel Aviv, estimates the occupation’s total cost since 1967 at more than $50 billion.

That annual spending is admittedly a fraction of Israel’s 350 billion shekel budget, a fact often pointed out by settler groups. But critics retort that the “settlement subsidies” are unfair, benefiting only a small minority of Israelis who choose to live in settlements which most of the world considers illegal.

The housing ministry, for example, will spend 76 million shekels ($22 million) to provide security for Israelis living illegally in predominantly Arab neighbourhoods in East Jerusalem, places such as Sheikh Jarrah and Silwan. Roughly 2,000 Israelis live in these neighbourhoods, according to Peace Now, meaning the Israeli government spends 38,000 shekels ($11,000) per settler. That’s more than double what the Israeli government spends on a per-child basis for primary education.

Some of the subsidies given to settlers are hard to quantify, meaning the 2 billion shekel figure may be an underestimate.

One example: Most West Bank settlements are designated “national priority areas”, which means Israelis buying homes are eligible for low-interest mortgage loans subsidised by the state. They also receive discounts on the land they buy – up to 70 per cent, in some cases.

The government will spend 160 million shekels this year ($46 million) to subsidise those national priority areas, but the budget does not specify how much will be spent in the settlements, and how much within Israel proper.

Other settlement-related costs are contained within the defence budget, which is not detailed to the public.

“And we can’t calculate how much that would be worth.”

‘Trying to be universal’

A poll conducted last week by Israel’s Channel 10 news found that 88 per cent of Israelis endorse the protests. That sort of near-universal support is rare anywhere, but especially so in Israel, where the political scene has become ever-more fragmented in recent years.

Support is strongest among self-described Labor party voters, but runs almost as high – 85 per cent – among those who belong to Netanyahu’s centre-right Likud party.

The only parties not to overwhelmingly support the protests, according to Channel 10’s poll, are Shas (a Sephardic Orthodox Jewish party) and HaBayit HaYehudi (a right-wing party which caters to settlers).

But Israelis are far more divided about the occupation. Polls conducted over the past few years have found the public almost evenly split on a variety of questions, such as whether Israel should freeze new construction in the settlements, or whether Israelis would support a peace agreement with the Palestinians which required evacuating settlements in the West Bank.

“[This is] an amazing stage for us to push our message, and all organisations feel the same,” said Elizabeth Tsurkov, a Hebrew University student who protested with a group that chanted about the occupation. “But I don’t think this will translate to the official demands, interviews of the leaders, because they know that this will split the movement right away.”

Indeed, a group from the Yesha Council, the umbrella organisation which represents settlers in the West Bank, actually met last week with organisers of the protest in Tel Aviv. Naftali Bennett, the head of the council, called some of the protesters “anarchists”, but described their goals as “righteous”.

That support would quickly disappear if the protesters vocally criticised the occupation.

“The people who are running the protest movement right now are trying to be universal, in the sense of including all citizens of Israel,” said Shlomo Swirski, the academic director at the Adva Center.

A spokesman for the Yesha Council did not respond to multiple requests for comment.

Settlement advocates have even tried to spin Israel’s affordable housing crisis to their political advantage: Forty-two members of the Knesset signed a petition last week urging Israeli prime minister Binyamin Netanyahu to solve the crisis by building more homes in illegal West Bank settlements (a suggestion Ofran described as “a bunch of crap”).

The decision to include settlers, and to focus primarily on issues of concern to Israeli Jews, means that many in Israel’s Arab community feel left out.

“We as Palestinians can’t really feel this movement is our own,” said Rami Younis, a 26-year-old biologist and activist who lives in Ramla, near Tel Aviv. “If they don’t mention occupation, settlements … it’s not going to change anything for the Palestinian people.”

‘The rise of a new movement’

The financial cost of the occupation is also a far more abstract issue for many Israelis than, say, the price of cottage cheese or their monthly rent bill.

“Generally the awareness of the costs of the occupation to Israel is not that high,” Swirski said. “To most Israelis, what happens on the other side of the Green Line might as well happen in Afghanistan or on the Moon.”

So it seems unlikely that the occupation or Arab rights will become major causes on Rothschild Boulevard. “It’s not like Netanyahu would withdraw from the West Bank if we demanded it, anyway,” one protester told Al Jazeera.

In private conversations, though, many protesters say they care about these issues, and argue that a liberal Israeli government would be more likely to halt construction in the settlements. The protests will not bring about short-term policy change, in other words, but many Israelis hope they will lead to a long-term shift in politics.

“This is the rise of a new movement and it could have a big impact on Israeli policy, Israeli politics,” Cohen said.

“This might bring a new party into the political scene. At least it will bring new politicians, and younger ones, who can connect leftist ideas about the economy to other leftist issues like the occupation.” 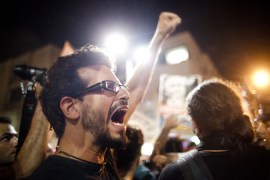 In Israel ‘it’s the economy, stupid’

Will economic grievances bring down the government of Binyamin Netanyahu? 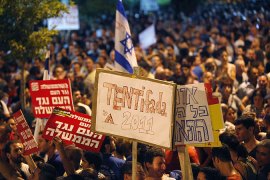 Committee to discuss socio-economic reform, after hundreds of thousands protest across Israel over high cost of living. 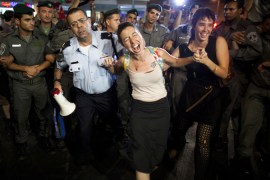 Has the Arab Spring arrived in Israel?

As Israelis protest against the rising cost of living, Inside Story looks at Israel’s growing class divide. 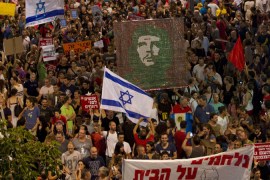 As tent cities pop up across country, 150,000 marchers show solidarity and PM promises panel to fix the problem.