In the Philippines, when the rest of the population goes to sleep, a reclusive community of indigenous people prepares for another restless night of fear and uncertainty.

Far away in the dense, dark forests of Occidental Mindoro, where Mangyan people are scattered in small remote settlements, tribal leaders now routinely contemplate their future in feverish debates that usually last until daybreak.

“We are petrified that big mining companies will take over our ancestral land. If the government gives them license to operate, our land and heritage will be lost forever,” says Juanito Lumawig. The 62-year-old supreme leader of all seven tribes of Mangyan is a worried man. For him, it is a battle for survival for his people, who for centuries have inhabited the rough and hard-to-reach highlands of this Philippine island.

Over 40,000 hectares of land, including vast swathes of forest is claimed by Mangyan as their ancestral domain. The land is believed to be rich in gold, natural gas and minerals worth many millions of dollars. The stakes are high and Mangyan are against all odds. In numbers, they are an ethnic and linguistic minority group of fewer than 25,000. Not only are the Mangyan physically and socially isolated from the rest of the Filipino population, they are also among the poorest and most marginalised.

A Mangyan family earns on average just $0.34 a day. Nine out of ten Mangyan have poor access to safe drinking water and the majority are illiterate. Historically nomadic and forest gatherers, the tribes often struggle to feed themselves, particularly during the rainy season which lasts four months. It is such a routine part of their life that they refer to it as “hungry period” like any other season of the year. The consequences are obvious as 60 per cent of Mangyan children are malnourished and infant mortality rates are so high that a child is considered fortunate to reach the age of ten.

Generations of isolation, discrimination and historical encroachment of their land by others have left Mangyan untrusting and fearful of the outside world. “First the lowlanders invaded our land and forced us to move to highlands and now we might be driven out again. Only this time we have nowhere to go,” says Yagay Sebastian, leader of Buhid – one of the seven Mangyan tribes.

According to the government regulations, all indigenous peoples like Mangyan tribes must prove their ownership of the land they claim as rightfully theirs through title deeds and legally valid documentation. Given that majority of Mangyan are illiterate with limited contact with the outside world, their ability to support their claim is fraught with great challenges rendering them even more vulnerable.

“The threat of commercial exploitation of Mangyan’s ancestral domain is real. Mining activities can pose threat to local environment and this may also result in displacement of the indigenous people,” says Reynante Luna, Provincial Officer of the National Commission on Indigenous Peoples.

The Commission, set up by the national government, is mandated to promote and protect the best interests of the indigenous people. It was created after the Philippines government passed the Indigenous Peoples Rights Act to recognise indigenous peoples’ communal and individual rights to their ancestral land along with their rights to self-governance, empowerment, social justice and human rights. However, nearly 15 years after enacting the law, very little has changed for Mangyans. “They remain among the poorest of the poor, still at the fringes of national priorities,” says Diana San Jose, an anthropologist who is supporting Mangyan tribes as they compile evidence for their legal claim.

In the absence of a legal title, it will be a greater struggle for Mangyan tribes to challenge commercial use of their land. Luna confirms there are three pending applications related to commercial mining in the Provincial Office record alone. However, he assures that these applications will undergo field based investigation to determine if they overlap with any ancestral domain. “It will also be referred to the concerned local government for any existing moratorium on mining,” he says.

This is no reprieve for Mangyan people. Even with all caveats, overlapping jurisdictions of local municipalities and national government have created gaping legal loopholes that make the situation worse for Mangyan. Ask Ed Gadiano, mayor of Sablayan – the largest municipality by area in the whole of Philippines. “Four years ago, Sablayan declared a moratorium on large scale mining for 25 years. Despite this, the national government granted exploration permit to a mining company on 9700 hectares of land,” he says. With Gadiano’s administration refusing to accept the occupation fee, the mining company has deposited 2 million pesos in a local court.

Already battling with severe poverty and exclusion, excessively private Mangyans are finding themselves in a morass of overwhelming bureaucracy. Most cannot comprehend that the land they have tilled and worshipped for centuries now requires a proof of ownership. They are relying on support from local and international community development organisations like Plan International to save the environment that they have strong spiritual and cultural connections with. “Some Mangyan tribes have already been awarded title of their ancestral land. We are assisting those who are still in the process,” says Naty Silorio, a senior Plan official overseeing development projects with the Mangyan in the region.

Since 2005, Plan has been actively engaged in child-centred community development for Mangyan. “We are working with the local government in enabling the community to secure their rights and preserve their culture,” says Silorio. For title claim, the organisation with support from the European Union is assisting Mangyan to survey their land, create 3D maps of their domain and document their oral history which is replete with references to geographical landmarks.

Securing the title is just the beginning for Mangyan as they head for even more testing times ahead. Leader Lumawig laments: “Our people have been offered bribes and some have ended up signing consent forms seeking commercial use of our land. We feel helpless and totally powerless.”

Frustration is growing among Mangyan, but, just like the forests they inhabit, their dissent is remarkably peaceful. Shaken, they are resting their hopes on their ancestors to guide them through. “Non-violence is part of our beliefs. Our ancestors told us that God created the forests for Mangyan. I am sure they will protect us,” hopes Lumawig. He believes he stands a chance with his prayers.

International Day of the World’s Indigenous People is observed on August 9 each year. 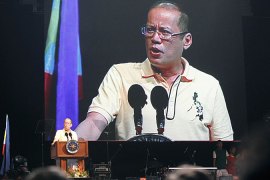 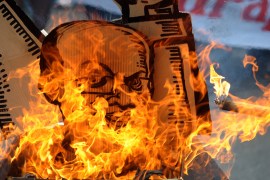 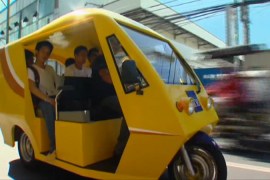