With young Libyan rebels bounding throughout Muammar Gaddafi’s once sacred Bab al-Aziziya compound, the dead men were easy to miss.

There were two of them. One, hidden under a mattress, betrayed himself only by his mangled hand, extending from beneath. The other lay twenty feet away, in a pile of papers to the side of a doorway leading farther into the compound.

He wore plain clothes and lay on top a circle of dried blood. He may have been dead for a day, perhaps two. Gun-toting men stepped past without a glance.

Snipers, mercenaries, or civilian Gaddafi loyalists, their identities were unclear. But the two dead men were flesh and blood proof of the violent loyalist resistance that remains four days after the battle for Tripoli began.

That resistance showed itself throughout Wednesday. From Abu Salim, a rough neighbourhood known for housing Libya’s most infamous prison, gunfire rang out and a cloud of smoke rose above the skyline.

Rebels were still fighting there. In the Bab al-Aziziya, the elation over sacking Gaddafi’s lair was drowned out by heavy machine gun fire and the explosion of incoming rockets.

In the morning, rebels gathered outside the compound’s main gate, nervously clutching their AK-47 and FAL rifles. They said snipers remained inside. Behind a stream of armoured pick-up trucks with mounted machine guns and rocket launchers, they moved back inside.

The mood quickly became celebratory. Rebels fired for amusement at a giant statue of a falcon on top one of the enormous inner grass courtyard’s buildings.

They scrambled over perhaps the compound’s most famous landmark: A sculpture of a fist crushing an American warplane.

Inside the building behind the statue, maintained as a relic of the US bombing in 1986, they stepped over destroyed meeting rooms, crunching broken glass and wood.

Behind the building, a warren of streets led to what appeared to be numerous houses for Gaddafi’s family or close associates.

Beds were overturned and torn apart, closets emptied. Women’s shoes littered the floor of one room. In another were children’s books and English lessons. A bathtub in one was still full with water. Another house’s living room, blackened by fire, still emanated heat.

In the courtyard, rebels waited out the early afternoon heat in the shade of palm trees. One group fired missiles from the back of their truck. They raced up over the compound, bound for what the rebels thought were loyalist positions in the rear or outside the Bab al-Aziziya compound. Fifty feet away, another truck with a converted helicopter rocket pod fired in another direction, over a tree line.

Anti-aircraft gunfire echoed from far back in the compound. Rebels were fighting loyalists street to street. Some regime fighters reportedly used the tunnel system beneath the Bab al-Aziziya to hide and reappear elsewhere.

During a lull, bullets suddenly snapped through the branches of the trees above. The crowd surged toward the exit as a shout of “snipers!” went up. Rebels crouched behind walls or walked lackadaisically back through the courtyard. Slowly, everyone calmed.

The rebels remained in the shade. An explosion sounded somewhere nearby. Then, a whistling, and another explosion, nearer and behind. A minute later, there was a hissing down from above. In a half-second, realisation dawned among nearby rebels, who fell to the ground or reflexively flinched. A rocket exploded twenty metres away, sending dust and a flash of flame into the air. There was no time to check the effects as the crowd scrambled to flee the compound again.

The battle for Tripoli

Elsewhere in the capital, violence was less evidence, though the streets were tense. Rebels stood on nearly every corner, adjusting their weapons and leaning over armoured plates on the beds of their trucks. Checkpoints dotted every intersection.

Down a street near the Rixos hotel, where foreign journalists would eventually escape five days of detention later that day, several rebels could be seen crouching close to the walls of a half-built building, advancing at a slow run after an unseen target.

At an intersection across the hotel, which had been guarded by Gaddafi gunmen, rebels offered contrary explanations of whether any loyalist troops remained.

One angrily shooed bystanders away, saying they were in danger, while another man beckoned them forward, explaining that it was safe.

Four days into the battle, nothing is certain in Tripoli. 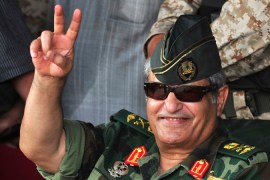