When widespread protests broke out in Syria in March, President Bashar al-Assad’s regime turned to its feared security services to smother the anti-government movement.

The bloody response has so far succeeded where other attempts to put down the “Arab awakening” have failed, and President Assad remains in power.

Verifying the toll of the crackdown is difficult, since the government has banned most journalists and observers, but activists and researchers say more than 10,000 people have been detained and at least 1,500 killed since March. A response of proportional size in the United States, by way of comparison, would have meant more than 136,000 people detained and 20,450 killed.

(Skip to the stories of those detained in Syria.)

At least 66 people are believed to have died while in the custody of Syrian authorities, according to a list provided by activists to Human Rights Watch researcher Nadim Houry in June.

Outside audiences have encountered the regime’s brutal response primarily through grainy YouTube footage and second-hand accounts relayed by expatriate activists.

These brushstrokes paint a useful yet broad picture: a dozen people killed in this city, a thousand people protesting in that city.

But first-hand accounts from those who have been through the packed cells of Assad’s jails or those who have come under gunfire from his troops offer a more personal understanding of the uprising.

Recently, Al Jazeera spoke with six men, three of whom were in Syria, and three of whom had left the country. All had been arrested or seen relatives suffer at the hands of the security services.

Their stories, which are available below, portray a violent state system in a spasm of panic, unsure of what it is confronting, yet nevertheless determined to crush it.

Wrapped in a ‘legal fiction’

“There are two types of arrest going on. One is widescale arrests in areas that have seen large anti-government protests … and it’s a way to punish and create fear and intimidation,” Houry told Al Jazeera. “The other, it’s not targeted, the net is wide, but we see arrests of [people whose] names [are] produced via intelligence services and informants. Those include activists, but also those who participated in protests.”

The campaign of arrests, Houry said, is wrapped in a legal “fiction”. Though Assad lifted the country’s 48-year-old emergency laws in response to protests, making it illegal for security forces to detain someone for more than three days without referring them to a judge, the rules have not applied during the crackdown.

Some of those arrested are quickly released, some are sent to a judge, and others have simply “disappeared”, he said. Often, activists have been arrested to pressure their families and associates to stay out of protests – an attempt to “break the back” of the opposition movement, said Houry.

The charges used to detain protesters include making a public disturbance, inciting sectarian violence, or insulting the president. Most of those who go before a judge are released on bail, and Houry knows of no one who has gone through a trial.

In many cases, the administration has responded to restive towns by besieging them. The army, typically the 4th Division under the command of Assad’s brother Maher, stations tanks and armoured vehicles to block entrances and exits. Water, electricity and mobile phone services are often turned off. The army and other cooperating branches of the security forces enter the town and conduct wide sweeps, arresting hundreds of men, young and old. Resistance, even peaceful protest, is often confronted with lethal force. Dozens of videos posted online show these tactics at work.

Relatives of those who are killed on the street or tortured in custody have no opportunity to seek justice through the courts, Houry said.

Security officers often pressure families to sign documents saying their relative was killed by “armed gangs”, and they threaten to withhold the person’s body if the family does not agree. Some families have fought back by refusing to sign the papers and rallying local protests. In some cases, they have forced local officials to return bodies without conditions.

Yaser Tabbara, a Chicago-based human rights lawyer and expatriate Syrian activist, is helping lead an effort among Syrian rights groups to focus international condemnation on the Assad regime and begin the process of international prosecution.

But bringing an international case against the Syrian regime will be difficult. Syria has never signed the International Criminal Court’s (ICC) founding treaty, so it is not subject to the court’s jurisdiction.

Tabbara hopes for another option. He wants the United Nations Security Council to makes its own referral, sending Syria to the ICC for investigation as it did with Libya, another country that never signed the treaty.

Tabbara studied under renowned international criminal law expert Cherif Bassiouni, often called the “father of the ICC”, and he has delivered a memo to the office of the court’s prosecutor, Luis Moreno-Ocampo, in the Hague.

The memo, filed on behalf of the coalition of rights groups, lays out a legal argument for an investigation into the Assad regime, should the Security Council make a referral.

“There is a reasonable basis to believe that crimes against humanity were committed in the context of the Syrian popular uprising, in particular crimes against humanity of murder; imprisonment or other severe deprivation of physical liberty; enforced disappearance, persecution and torture,” it states. “There are so far no national proceedings implemented by the state to investigate and try those who bear the responsibility of these crimes.”

The chance of the Assad regime arranging its own fair investigation is “very slim”, the memo says.

The document is based on more than 400 meetings and 2,000 telephone interviews with witnesses conducted by members of various rights groups.

Tabbara related the story of one man he interviewed.

The man was driving in a suburb of Damascus when security forces stopped his car and searched it, looking for a memory card or any evidence that he had taken photographs of protesters. They detained the man and charged him with challenging the sovereignty of the state and denouncing the president.

During one interrogation, he was put into a stress position in a chair, his hands tied behind him to his feet, arching his back. They beat him and threatened to pull his nails out.

After a week, they gave him a court date and released him. A few days later, he was arrested again and put into solitary confinement for 20 days.

“This time it’s a different security branch. They don’t always talk to each other,” Tabbara said. “When someone is detained, two branches might not talk, one might not know where their target is, he might be sitting in another prison. That’s exactly what happened with this gentleman.”

The man’s court date came and went as he sat in jail. He was interrogated, but not tortured, and eventually released. He quickly went into hiding, as a third branch of the security forces came looking for him, and escaped the country.

Tabbara acknowledged that a Security Council referral “right now sounds like sort of a far-fetched idea”, but he said that expatriate Syrian opposition figures are lobbying the two key permanent members of the Council that have opposed harsh action: Russia and China.

Russia is upset with the way UN Resolution 1973 was used to begin an air campaign against Libyan leader Muammar Gaddafi, and the Kremlin still sees strategic benefits in Assad, Tabbara said. Russia maintains a Soviet-era naval base in the city of Tartus, and reporting in recent years has suggested the country is interested in upgrading that facility, building another in Latakia and improving its naval presence in the eastern Mediterranean.

China, meanwhile, fears that international action to prevent Arab crackdowns during the season of uprisings will set a precedent that could make it harder for Beijing to use similar methods against its own internal dissent, Tabbara said.

For now, Syrian expats are visiting intellectuals, writers, government officials and media outlets in key council member states, lobbying and making the case that they need to “be on the right side of history”.

Click on the images below to read the stories of survivors.

Egyptian-American engineer beaten, threatened with death and forced to invent a story about spying for Israel.

Architecture student goes underground after joining protests and seeing his father broken by torture in Damascus.

On a march to the besieged city of Deraa, protesters come under fire, and a man loses his brother.

Alone at the capital’s first protest, a Bob Dylan fan commits to the uprising, then ends up in solitary confinement.

Egyptian IT consultant in Lebanon visits friends for a weekend and gets pulled aside at the border.

Long-haired ‘metalhead’ arrested and accused of spying after sharing coffee with a suspect. 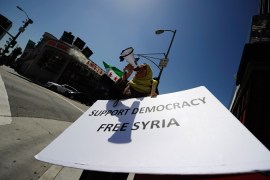 Diplomatic net closes on President Al-Assad as international community looks to up ante on sanctions. 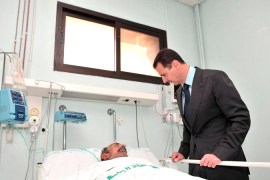 Syrian doctors who torture must be banned

International standards are needed to prevent medics complicit in torture from operating overseas. 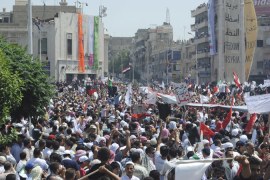 Security forces blamed for more killings of civilians as mass demonstrations are held to show support for Homs.