Sami Ben Gharbia is a Tunisian human rights campaigner that lived in exile for many years. He is the Advocacy Director at Global Voices and the co-founder of nawaat.org.

Nawaat is a popular Tunisian blog and online news aggregator that played a key role in pushing events forward, providing relevant information and content to the journalists that were covering the Tunisian uprisings.

The organisation co-hosted a concert in Tunis on July 2, at the end of the Creative Commons (CC) Arab regional meeting, which sought to celebrate “openness, creativity, innovation and the culture of sharing”.

Al Jazeera caught up with the activist to get a deeper insight into the role that Nawaat played in the uprisings in Tunisia that went on to become the ‘Arab Spring’.

Can you tell us little more about Nawaat?

Well Nawaat, which means ‘the core’ in English, is a collective blog created in 2004 to provide a platform for bloggers, cyber-activists and people who are involved in defending human rights in Tunisia, to publish their writing. It has also been used to publish press releases of human rights NGO in Tunisia

Nawaat played a big role in the Tunisian uprising. Tell us about the events going on here right now called: Sharing the Arab spring.

The event is an attempt to bring young artists from the Arab world and to share this feeling of revolution and change through the sound of music.

The theme is around the Arab Spring – it’s a buzz word, like Facebook revolution or twitter revolution – it was coined first as a political term from the revolutionary change in Europe in the 19th century after the creation of the communication technologies like printing and the telegraph – this was a force of change in Europe, it changed things radically.

So, it is a spring in a way but it has its own historical and geo-political meaning.

What are your thoughts of the spring at the moment – as a Tunisian in exile for a long time, now that the president has left and you have been able to return to your country? What would you as an activist like to see? Is change happening?

One can look at this from different perspectives. From the dynamic of the revolutionaries, those people who really pushed for change – it did not come in two or three months, but was rather the work of an entire generation. Under the rule of Ben Ali, two decades of people were struggling and fighting – these included unionists, teachers, lawyers, activists and more.

We had thousands of political prisoners, thousands who were exiled in the diaspora – they were very active in spreading information and trying to break the wall of fear that handicapped the people of Tunisia and prevented them from going into the street to demand change.

However, we still have a lot of negative things – the corrupted system is rooted in the Tunisian government and we cannot change that radically, but we do need to change that.

The dynamic on the street, the sit-ins, and the debates, mainly online, are helping. We toppled the government with the revolution and dropped ministers who were propagandists of Ben Ali’s regime. The Tunisian people have enough political consciousness and will continue to make change.

There is also another group that is building an argument of the economic situation in Tunisia, saying that now we need to make the country really run again and we need investments.

Many have attributed the wave of protests in Tunisia to the rise of the internet and social media websites. As an internet activist and someone who worked with Nawaat before and during the revolution, what do you think was the role of the internet?

The role of the internet in the Tunisian revolution, and building the spirit of protest and change, is the work of at least a decade. After the blocking of the first Tunisian websites in late 1990s, Tunisian activists who then became bloggers, were engaged in defending online freedom of expression. They were very creative in using technology in countering the propaganda of the state and to raise their hands against the lies and the corrupted system.

They used many tools, tactics and strategies and were very good at building networks inside the Arab world. These networks helped, at least during the Tunisian protests, to create a support and solidarity movement within the Arab web-sphere. I think that was crucial to spread to the world what was happening inside Tunisia. This fostered the spirit of change and the shockwave that we witnessed in the region after the Tunisian revolution.

So Nawaat played the role of being among the first that dedicated the time and effort to fight against online censorship – to talk clearly about the need of changing the Ben Ali system. We always said that the dictatorship could not be reformed but needed to be toppled.

And that is what we did – during the last seven years with Nawaat, and before that as individuals on various websites, we were involved in all the momentums of Tunisian political life.

As a journalist who covered the Tunisian uprising from the early days, I noticed that Facebook was the platform that most activists used to spread information and content. Why was Facebook in particular so popular?

During the revolution we noticed that there were limitations on the Facebook platform. We know Facebook, we know the tools – it’s not about the tools, it’s about the context in which the tools are being used, it’s about the strategy, implementation and approach to the using the tools.

That consciousness of the tools is really important in understanding the impact that the internet had on the Tunisian revolution – Facebook is a closed platform – it has been used hugely by the Tunisian activists that were on the ground, take pictures and videos and posting that on Facebook. That was great.

Facebook, by its inner nature and structure, was limited. You had your family, friends, people who live abroad that you can connect with. It had that social character inside of it, but Facebook was also important because the Tunisian internet police blocked all other websites before Facebook.

All that censorship generated a massive migration from using video sharing websites to relying only on using Facebook as a publishing platform for video and photos.

While that is perhaps a negative thing, in political terms that was great action created by the government – they had gathered all Tunisian people in the Facebook platform and unwittingly created a solidarity movement that went on to oppose the Ben Ali government during the revolution.

The voices of the Tunisian people were not dispersed on the internet – they were all collected there on Facebook. And we have the experience that the Tunisian government tried to block Facebook in 2008 and they did it for 10 days. This created a wave of anti-censorship sentiment. People who were not activists or interested in anything political, were upset at this and some went on to join the anti-censorship movement.

I think that was the best case scenario of the Cute Cat Theory of Digital Activism that was coined by Ethan Zuckerman – when governments block websites that were popular for internet users to share funny videos and music, and to see pictures of cute cats, it unknowingly creates among those internet users a tiny percentage that will be dedicated to fight against online censorship. You will create your own enemies by implementing internet filtering and censorship.

And that is what happened in Tunisia – among the most vibrant, active and creative group within the Tunisian protest movement, was the online anti-censorship movement.

Looking forward, what role do you see Nawaat playing and what role do other online activists need to play in this period of political transformation?

We are trying to play roles on different fronts – and fights – again, fighting online censorship. We’ve seen in Tunisia a period when we didn’t have any kind of censorship – everything was opened after the revolution, and then we’ve seen the will to censor what they call hate speech, people calling for the use violence, etc. We can argue about that but it’s a very sensitive issue.

And we’ve also seen some lawyers suing the Tunisian Internet Agency and asking the judge to order the agency to block pornographic websites, which they did.

So while there is no censorship like we used to have in Tunisia, there is a threat that it will come back through the arguments of fighting moral degradation, etc. That is a fight that we need to engage in.

There is also the fight to have really open data and open access to information – the Tunisian archive for television and radio, the facts about the Tunisians population, the economy and other information.

We knew that Ben Ali was falsifying the numbers, to get credit and to get money from banks and financial institutions. So we now need to know the real numbers and the status of the economy, and we need the real data.

There are a lot of people here engaged in that – the open source movement and many activists, in trying to convince the information ministry to open the archives, and open the data to the public so we can contribute to a better future for Tunisia.

There is the fight of this centralized information, in Tunis the capital.  The regions that triggered the revolution and gave martyrs to it are marginalized economically and in the media as well. So we need journalists who really bring their voices to be heard.

We are planning to train new activists on information technology, and to train and support NGO’s in Tunisia to suit the moment – election monitoring, environmental and social issues. We have a lot of work to do, and as we did during the last 7 years, we are fighting corruption and injustice.

We will fight to build a new Tunisia. We need another set of skills, not protest skills, skills of building.

A young Tunisian told me that while much has been achieved, there there is still a lot of work to be done, and a lot of struggle that is needed. He said that Ben Ali was the head of the dragon, but the rest of the dragon still lingers. What do you think?

I agree, the corruption is rooted from the top to the bottom of the administration. It takes time, awareness to change that.

It takes investigative journalism to try to understand what’s going on, and to expose it to the world. And to change it, we need information, without information we can’t have consciousness, and without consciousness there is not change.

Information is key in this process of change. We need to change the rest of the ‘dragon’.

Outside photo taken by Joi Ito. All images are used under a CC BY 2.0 license. 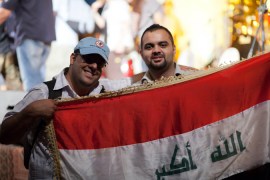 Artists and open-source activists met in Tunisia to celebrate new-found freedoms and promote openness and sharing. 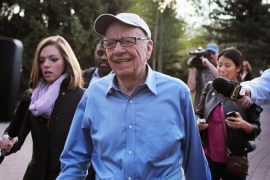 The rise and fall of a global media baron?

As News of the World newspaper shuts down, analysts speculate on the future of its billionaire owner, Rupert Murdoch.