Almost immediately after landing at Ben Gurion, Israeli security officers quickly separated a group of passengers for extra scrutiny at passport control, among them most of the activists.

They were then taken to a police bus parked outside the terminal where men and women were separated and were shoved into tiny cells in the converted touring car after being stripped from their belongings.

Ten men were crammed into a space of roughly 3,5 square metres that was infested with cockroaches. The activists on the bus started singing and chanting and demanded to see a lawyer, but were told by the Israeli border police to “shut up” and were threatened with violence if they didn’t.

“I don’t want to hurt you but I certainly will if I have to,” shouted an officer after opening the door to the cell in which the activists were held. When the singing and chanting continued, the border police officers started spraying water through the bars of the cell. “Dogs are treated better in my country,” Bilal, a 24-year-old student from Brussels, said.

Prior to this, while cruising at 30,000 feet over the Mediterranean towards Tel Aviv, a group of Belgians is discussing what could happen to them when they land in Israel.

The 23 pro-Palestinian activists, mostly university students from Brussels, are taking part in the ‘fly-in’ to Tel Aviv’s Ben Gurion Airport to protest Israel’s restrictions for travelling into the Palestinian territories.

In the back of a half-empty Boeing 747 the Belgians go through different scenarios, as the level of excitement in the group seemingly grows with every mile that the plane approaches its final destination.

“What if the Israeli border police separate us,” the activists ask each other. “What will happen if they take us to another terminal like they did with other activists who managed to arrive in Tel Aviv? Should we refuse to leave the plane? Or would we then be doing something illegal, which would negate the purpose of the protest?”

The Lufthansa Boeing started its journey earlier that day at Paris Charles de Gaulle, where almost one hundred French activists planning to participate in the same fly-in were banned from the flight after Israel blacklisted most of them.

During a stop-over in Frankfurt, the Belgians kept a low profile during check-in procedures. As the passengers assembled at the gate, smiles of triumph appeared on the faces of the activists who scattered themselves among other passengers. They made it on the flight.

After the plane took off in Frankfurt, Abdellah Boudani, a 24-year old political science student from Brussels, explains why he is taking part in the fly-in.

“It is clear that the powers that exist will not pressure Israel into changing its course. Apparently, change will have to come from grass root efforts and protests like these.

“So they invited us to draw attention to this injustice. It’s very simple. We’re not going to make any trouble. We are just going to Ben Gurion and tell them we’re here to visit Bethlehem in the West Bank. If law applies, Israel will do the rest.”

Many within the group do not know each other or only met two weeks ago in Brussels during the final briefing on how to conduct the protest.

Among the group is Fathallah Legsaï, a 48-year-old taxi driver from Brussels and father of three. He is accompanied by his 14-year old daughter, Cherine, who seems as eager to participate in the debates on board as the others.

Like most others in the group, Hajar, a 26-year old translator from Brussels, said she has never been to Israel and Palestinian territories.

“We are still very well informed because of all the news coming from the region. You cannot escape it. Now we want to see it for ourselves.”

Most of the activists had their plane ticket sponsored by people who wanted to contribute to the cause but were not willing to participate or could not get the time off work.

“That’s why there are so many students in our group,” Hajar explained. “A woman I don’t even know paid 400 euros for my ticket and my aunt the remaining 100 euros.”

After being detained at Ben Gurion airport and placed in a bus where they were held for four hours, the bus carrying the activists finally moved and drove the group to a prison facility near Beer Sheva in the Negev desert, a two hour drive from the airport.

Submitting to their fatigue after skipping a night of sleep, the detainees disembarked the prison bus and were guided through one of the prisons narrow corridors filled with prison guards, some of whom were filming or taking pictures of the new arrivals.

The sixteen men in the group were again separated from the women and were put into one small holding cell prior to being processed as prisoners in the new Ela prison facility.

Having been crammed into the bus for six hours, many of the detainees fell asleep on the concrete floor of the cell after finally being able to lie down. Later, each person was again frisked and brought to the actual prisoners’ area, where they met with a psychologist and a doctor.

The detainees were given breakfast and a bag containing slippers, clean prison outfits, soap, and toothpaste and a brush. Each one was allocated a bed bunk, four to a cell.

After eating breakfast, Fathallah’s daughter Cherine suddenly appeared in the men’s area and ran towards him, leading to a tearful reunion. Due to her young age, the minor was allowed to remain with her father.

Cherine is the youngest of Fathallah’s daughters. “She is the youngest, but at the same time the most mature,” Fathallah said. “She causes trouble, skips school and is a rebel. She has a very strong personality. I took her with me on this trip to show her that there are a lot of deprived people in this world.”

“She just told me after breakfast that after experiencing this, she wants to go back to school and study international law. This has been a life-changing experience for her.”

Later, the detainees were individually called in for a meeting with Israeli immigration officers who asked them to sign declarations in which they would promise not to go to the Palestinian territories in the future and refrain from causing trouble or taking part in protests. In some cases, the declarations were also deportation forms.

Among the few who were released into Israel, Gadiza Bouazani, a 30-year-old councillor from Utrecht in the Netherlands, was mistakenly scooped up by the Israeli airport security.

Tel Aviv was meant to be the starting point of a four-week backpacking tour of the Middle East. “My dark skin and black curls made them think I belonged to the group of Arabs among the activists. I am shocked at the way we have been treated and I might just want to go back home after this.” 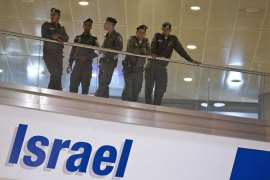 While it is the lawful right of a country to prohibit air passengers from entering, the move remains controversial. 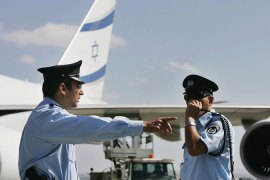 Activists conducting ‘fly in’ to Israel