The magnificent ruins of this ancient Hindu temple, a World Heritage site since 2008, have become a bitter cause of serious border skirmishes between Thai and Cambodian soldiers. The skirmishes come amid conflicting claims over sovereignty and age-old historic rivalry.

This Hindu-inspired 11th century temple, spectacularly perched atop a mountain escarpment, hugs the border between Cambodia and Thailand.

According to Sanskrit inscriptions, the temple was once called Sri Sikharisvara, meaning “Glorious Lord of the Mountain”, a dedication to the Hindu god Shiva.

Tanks and artillery have been mobilised only a few kilometres from these archaeological treasures. During an outbreak of hostilities twice this year, heavy shelling resulted in 17 dead and more than 50,000 people forced to flee on both sides of the militarised border.

When Preah Vihear temple was granted World Heritage status in 2008, Cambodia celebrated. People danced with joy in the streets of Phnom Penh. But in neighbouring Thailand, it triggered a series of angry xenophobic protests.

The Thai Patriots Network and the PAD People Alliance for Democracy (the Royalist Movement) have recently cranked up the pressure on Thai Prime Minister Abhisit Vejjajiva, pushing him towards a more hard-line stance over this festering border conflict with Cambodia in the months prior to the general election set for July 3.

Deputy leader of the Democrat Party Kraisak Choonhavan is alarmed by the impact of ultra-nationalism on his own government. “The PAD has been critical of the Thai government for the past two years. Now they have become jingoistic, which is very dangerous,” he said.

Recent fighting between Thai troops and the Cambodian army in the disputed border area adjoining the temple inflicted minor damage and defaced part of the stone walls in early February 2011. Even the UNESCO flag of protection for ancient monuments suffered bullet holes.

Responding to rolling street protests by his former PAD allies in the capital Bangkok earlier this year, the Thai prime minister assured the public that the border clash “shows that we never fail to protect our sovereignty” and even called upon UNESCO to revoke the World Heritage listing of the Preah Vihear temple.

Dr Paul Chambers, a Thai politics specialist at Payap University in Chiangmai, told Al Jazeera, “the Yellow Shirts and the Thai Patriots’ Network have succeeded in building up an ever-growing Thai nationalist frenzy in Bangkok”.

With the ruling Democrat Party led by prime minister Abhisit Vejjajiva still playing the “Cambodia card”, there appears to be zero chance of resolving the border dispute before the election.

Thai academic Dr Pavin Chachavalpongpun, based at the Institute of Southeast Asian Studies, told Al Jazeera that “the current conflict is not really about Thai-Cambodian conflict, it is more about Thailand’s own conflict”.

The background to the conflict dates back to the period of the great Angkorian Empire, when the territory of Cambodia stretched across most of South East Asia, preceding the emergence of Siam as a nation-state now known as Thailand. The 11th century temple of Preah Vihear preceded the completion of legendary Angkor Wat and Bayon temples, also renowned World Heritage sites.

When the Khmer Empire declined, a Siamese army invaded Angkor in 1431. And, in the 16th century, Cambodia again lost further chunks of territory to the invading Siamese army.

The process of losing territory to their more powerful neighbours was only arrested by the arrival of the French army that incorporated Cambodia as part of their Indochinese colonial empire in 1863.

After Cambodia regained its independence from the French in 1953, the Thai military regime occupied the temple, prompting the Cambodian head of state, Prince Norodom Sihanouk, to refer the dispute to the International Court in The Hague.

Does the court decide?

The 1962 International Court of Justice ruling between the two countries declared the temple to be a part of Cambodia. The verdict was grudgingly accepted by the Thai side and their soldiers were ordered to withdraw.

No serious challenge to Cambodian sovereignty over the temple was made for the past 46 years – until the bid by Phnom Penh to secure this temple as a new World Heritage site.

But Thailand has still staked claim to 4.6 sq km of adjoining territory surrounding much of the temple’s site, which was not part of the ruling in The Hague Court.

Cambodia has appealed to the UN Security Council and the regional body of South East Asian countries ASEAN for mediation on the issue, but Thailand stubbornly insists on bi-lateral negotiations.

The issue has now been referred back to the World Court at The Hague by the Cambodian side, to rule on the disputed area.

Ultra-nationalists in Thailand hark back to the days of Field Marshal Sarit Thanarat’s military dictatorship which had occupied the Khmer temple of Preah Vihear in the late 1950s. Many in right-wing nationalist circles in Thailand never fully accepted either the World Court verdict or Cambodian sovereignty over the temple.

Thongchai Winichakul, Thai Professor of History at the University of Wisconsin in the US, commented that the temple furore demonstrated that “the dark side of nationalism is dangerous as ever”. The author of Siam Mapped: A History of the Geo Body of a Nation, he wrote in his book: “The Preah Vihear World Heritage case has gone beyond technicalities. It is abused to arouse the delusion that the temple belongs to Thailand, and a desire to revive the claim”.

In December 2010, the Thai Patriots’ Network, an extremist faction of the Yellow-Shirt Movement headed by Veera Somkhwamkid, deliberately provoked a border incident by leading a team into Cambodian territory resulting in their arrest.

The Cambodian court convicted five out of the team, and they were detained in Cambodia for immigration violations; they had entered the country illegally. They were promptly set free after the court verdict, however, Mr Veera was charged with espionage and jailed for eight years.

The jailing of Veera triggered angry anti-Cambodian protests in Bangkok. However, most Thai people living in the border areas were far more interested in trade with neighbouring people, and increased efforts to peacefully resolve the conflict.

Dr Charnvit Ketseri, historian and former rector of Thammasat University in Bangkok, told Al Jazeera that Thai extremism and anti-Khmer sentiment was based on ignorance – even among the educated. “Most educated Thai are badly informed by history textbooks of the Ministry of Education, by politicians, and by main-stream mass-media,” he said.

The temple – a hostage to Thai domestic politics

Regional bloc ASEAN has noted the growing hostilities between two of its members, and Indonesia, the current chair of the 12-nation group, has made repeated offers to send observers to prevent further clashes.

Thailand had agreed with Cambodia several months ago to accept a limited role for Indonesia observers to monitor the two armies camped near Preach Vihear temple. This accord permitted Indonesian observers to be “embedded” with Thai soldiers and the Cambodian army on either side of the much-coveted temple.

More than three months after the agreement, there are still no observers deployed at the border.

However, the powerful Thai military had other ideas. Thai army chief General Prayut Chan-O-Cha declared on March 23 that “regardless of where the observers are from, we don’t want them […] in the disputed area because it’s dangerous and will complicate the problem”.

He reported that the Thai defence ministry, armed forces, and military commanders were opposed to international observers on Thai territory, thus rendering the ASEAN peace plan dead. Futhermore, Abhisit’s civilian government was unable to prevent the army from calling the shots over how to handle the Cambodian conflict.

“Fighting has allowed the military to increase its influence in the name of protecting national interests. This is a crucial point at a time when Thai politics is so unstable,” asserts Dr Pavin Chachavalpongpun.

“I think Thailand’s memory of an international organisation giving legal control of Preah Vihear temple to Cambodia in 1962, will make it unwilling to allow any other intervention by outsiders, such as UNESCO or ASEAN,” he added.

The Preah Vihear temple is likely to continue to be held hostage to Thailand’s polarised politics long beyond Thailand’s election.

At the 35th annual conference of the World Heritage Committee meeting in Paris in June, Cambodia’s management plan for the temple was supposed to be on the agenda. Thailand had asked for it to be delayed until this year. Now Bangkok again insists on a further delay – until there is a settlement on the issue.

Aggressive nationalism, a politicised Thai army asserting a stronger role in politics, the current election campaign, and the country’s chronic instability, have effectively derailed plans by Cambodia and UNESCO to move forward with heritage conservation to restore the temple. 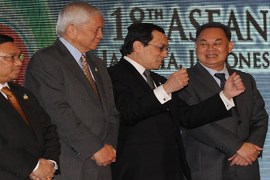 Leaders of feuding neighbours to stay extra day in Jakarta for more dialogue on issue that upstaged ASEAN gathering. 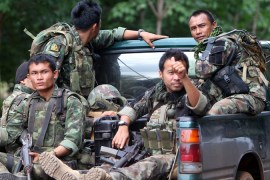 Thai soldier killed and several others wounded in continuing clashes over disputed temples on the border. 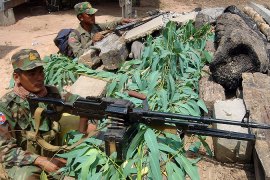 Border skirmishes continue for an eighth day as both sides accuse the other of breaking a short-lived truce. 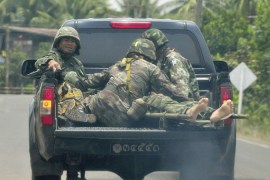