Libyan rebels located hundreds of anti-personnel landmines buried by Gaddafi forces by using billiard cues to gently probe the ground where they were buried.

Around 550 mines were dug up in a suburb of Misurata in what is believed to be the biggest minefield found so far in the four-month conflict, discovered when an unlucky farmer’s camel wandered into a field and was blown up. Landmines are banned in most countries but Colonel Gaddafi’s forces have repeatedly planted them in areas where rebels were attacking.

Behind the dangerous expanse of land, are trenches that were abandoned by the regime forces after they fled. Strewn inside are boots and green uniforms belonging to regime forces.

Residents said they found a string of Grad rocket launchers stationed behind the field. From here the regime forces pounded the port side, and the residential area of Qasr Ahmed. In early April, up to eighty rockets hit the neighbourhood in one hour.

“They laid the mine field to prevent the rebels from reaching the rocket launchers,” said resident Mohammed Turgomen, 54.

Twenty five years ago he was an engineer in explosives for the Libyan army. Now Turgomen has dredged up the memories of his military past to head up a mine removal operation. It is a lethal venture, and the team are unequipped. Using billiard sticks three men stepped delicately into the area sectioned off by razor wire and covered in “danger; keep out” signs.

Poking the ground before them they stepped slowly forwards. Within minutes Turgomen found the first mine; hardly discernable in the sandy landscape was an inch wide sand coloured detonator. Then he found another, and another. Barely twenty minutes into the operation and the three men had unveiled 25 mines.

Standing still, sweat trickling down his brow – a mix of fear, and hot sunshine, a team member began scratching the ground around him to reveal four antipersonnel explosives. His colleague stepped across, gingerly pulling the mines out of the ground by their tops, and unscrewing the detonator from the body.

In less than four days, the civilian team unearthed over 500 mines. They remain stashed in the wooden boxes of used katyusha rockets. The full boxes stood in the back of Turgomen’s truck, the detonators in a large basket.

The Brazilian made antipersonnel mines are plastic; making them invisible to metal detectors commonly used in mine clearance procedures. “The Benghazi Transitional National Council gave us a metal detector, but it is useless here,” said Turgomen.

“I am scared that children will play over there, and it is so dangerous because the people don’t know that there are hidden bombs. That is why I took them out, I am scared children will or families will play there or move there” added Turgomen.

Turgomen gave his two team members five days training. It is a far cry from the years long training, expertise and equipment usually required to remove such dangerous weapons.

“The way these mines are being removed is extremely dangerous, and not at all conventional,” said Sean Sutton, Communications Manager for the British humanitarian organisation Mine Advisory Group (MAG). “You need expert technical equipment and expertise. It is a miracle no one has been hurt.”

Amnesty International documented the use of the same mines on May 25, 2011 at a smaller site in the Tammina district of Misurata. There, rebels cleared twenty. The same mines were also found in Ajdabiya in late March by Human Rights Watch.

The organisation has strongly condemned the use of mines in the Libyan conflict that began in late February. “Libya should immediately stop using antipersonnel mines, which most of the world banned years ago,” said Peter Bouckaert, emergencies director at Human Rights Watch.

The team said they are desperate for assistance. “We don’t need money, we need experience. We have never seen these mines before, this is new for us, we are civilians, we have no idea about this,” said Turgomen.

The British government in June gave Mine Advisory Group (MAG) £180,000 ($270,000) of funding to deal with the explosives that remains scattered across Misurata. “The problem is huge, and extends beyond mines. The priority now, however, is the unexploded ordnances in populated areas,” said Sutton

“Just the other day a child was admitted to hospital after picking up a live cluster bomb. She lost her hand,” said Dr Khaled Abufalghan, spokesperson for Misurata healthy committee. “The bombs have ribbons on them and are attractive to children.” 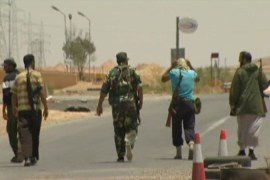 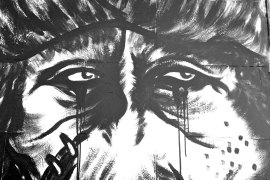 In Pictures: Battle for Libya

Photojournalist George Henton provides Al Jazeera with an intimate look at the war in Libya. 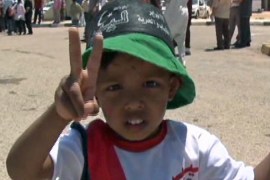 Scenes of jubilation in city besieged for weeks as Gaddafi becomes a wanted man.