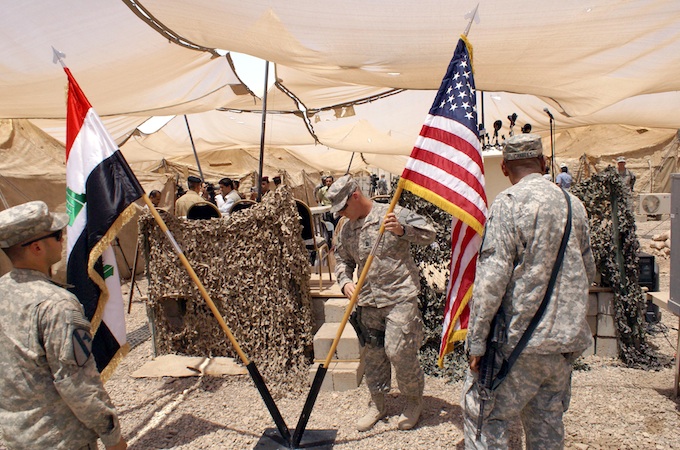 US troops are required to leave Iraq completely by year’s end, unless the Iraqi government asks them to stay [EPA]

Security in Iraq is better than it has been at almost any time since the US-led invasion in 2003, but violence has crept up in recent weeks and there are fears about what will happen after US troops leave the country later this year.

At least 65 members of the Iraqi security forces were killed last month, according to the website icasualties.org, which tracks Iraqi and American casualties. That is a 465 per cent increase from January, when 14 Iraqi soldiers and police were killed.

Civilian casualties on a month-to-month basis have remained largely constant, suggesting that armed groups are increasingly targeting the security forces.

June, meanwhile, has been the deadliest month for American troops in Iraq since May 2009. Eleven soldiers have been killed, most of them in rocket attacks on US bases, according to the US defence department. American troops have been largely confined to their bases since US President Barack Obama declared an end to “combat operations” last year.

To be sure, Iraq is a far safer place now than it was several years ago. In summer 2007, at the peak of the country’s violence, nearly 200 members of the security forces and 100 American soldiers were being killed each month; the number of civilian casualties spiked into the thousands.

The current level of violence is, in a sense, Iraq’s “new normal,” though that phrase seems to trivialise the deaths of hundreds of people each month.

“We shouldn’t be surprised that there are more attacks on US personnel and Iraqi forces,” Michael Wahid Hanna, a fellow at the Century Foundation in New York, said.

“It’s something that has been talked about for a long time, in terms of the optics of how you want the Americans to leave.”

Still, there are a few ominous signs for Iraq’s long-term security, particularly the tension between security forces and local governments and the ongoing political paralysis in Baghdad.

Violence has flared highest in a few areas with large Sunni populations, particularly those bordering Iraq’s Kurdish regions. Of the 65 Iraqi soldiers and police officers killed last month, 16 were killed in Mosul [the capital of the northern Ninewa province] and six in Kirkuk.

One-third of the casualties, in other words, came from just two of Iraq’s 18 governorates.

Mosul is, on a per-capita basis, the most dangerous city in Iraq, and in recent months it has been the site of dozens of targeted attacks against government officials and military officers.

The leaders of those provinces have a lingering mistrust for the Iraqi security forces, which are controlled by a Shia-led government in Baghdad.

US troops have acted as a sort of buffer between the two, but as they accelerate their withdrawal, there are fears of open conflict.

“I think politicians pose a greater threat on the province than the armed groups,” Atheel al-Nujaifi, Ninewa’s governor, said.

“We don’t trust the security forces because they take their orders from Baghdad … they may have a certain agenda to impose.”

Within the Kurdish areas there are similar fears: the Iraqi army has clashed repeatedly with the peshmerga, security forces under the control of the Kurdish regional government.

One shootout in Kirkuk in April left one civilian dead and several soldiers from both sides wounded.

“Without the American troops that we have counted on for so many years now, my worry is that the situation may be destabilising, may be dangerous for Iraq and for the Kurdish region,” Barham Salih, the prime minister of Iraqi Kurdistan, said.

US troops are scheduled to withdraw completely from Iraq by year’s end, though few observers expect they will fully meet that goal.

In Iraq’s Kurdish areas, meanwhile, there are fears of clashes between peshmerga and the Iraqi army

Iraq, after all, has no viable air force; struggles to control its borders; and lacks sophisticated military intelligence and surveillance technology.

So the Pentagon has long planned to leave a “residual force”, perhaps 10,000 to 12,000 troops, to perform those functions and to continue training Iraqi troops.

“There is still work to be done in those areas, although they make constant strides in their capabilities,” Colonel Barry Johnson, a spokesman for the US military forces in Iraq, said.

“It is ultimately up to the Iraqi government to assess the overall capabilities and readiness of their forces, and to determine any assistance they may need in the future.”

But the Iraqi government has to ask the US to extend its presence in Iraq, because the current “status of forces agreement” between the two governments requires all American troops to leave by December 31.

The issue is politically fraught for Iraqi politicans, particularly within prime minister Nouri al-Maliki’s party, which forged a shaky alliance last year with the staunchly anti-occupation Sadrist movement. Maliki has not publicly shared his own views on the question; instead, he said last month that he would ask the US to stay if 70 per cent of Iraq’s political leaders agreed.

“I think when you talk to Iraqi politicians, most of them would agree the Americans should stay in some form, though maybe not at the current levels,” Joost Hiltermann, an Iraq analyst at the International Crisis Group (ICG), said. “But they simply cannot afford to say so publicly, and Maliki in particular.”

Sunni and Kurdish politicians generally support an extended US presence, but are unlikely to cross Maliki’s 70 per cent threshold without significant buy-in from Shia politicians.

The security situation is not helped by an ongoing dispute between Maliki and Iyad Allawi, his chief political rival, over control of the security forces.

Maliki and Allawi agreed to set up a national strategy council as part of the power-sharing deal they reached in December. The council was meant to be a check on Maliki, who as prime minister enjoys wide authority over the Iraqi security forces.

But the agreement left key details unresolved, namely, the exact powers and responsibilities of the council.

Iraqiya signed the deal anyway; al-Maliki now claims that the council is unconstitutional; and without a concrete agreement, Iraqiya has found itself politically sidelined.

“Iraqiya keeps asking for the implementation of ‘balance’ in the ministries of state, as well as the creation of a strategy policy council,” Reidar Visser, a senior research fellow at the Norwegian Institute of International Affairs, said.

“But if the details weren’t hammered out at the time, Iraqiya’s leverage is now greatly diminished.”

Iraqi politicians always viewed the council as more of a political expedient than a serious concession, so its current ambiguous status is hardly surprising.

“I don’t think there’d be this urge by Allawi to blow up the coalition and throw away all of Iraqiya’s gains” because of the council dispute, Hanna of the Century Foundation said.

More significant is the government’s inability to name defence, interior and national security ministers; Maliki named himself to those posts on an acting basis in February. Al-Maliki has rejected at least five Sunni candidates for the defence ministry job, while Iraqiya has vetoed several Shia candidates.

Analysts and some of al-Maliki’s opponents say the council dispute is symptomatic of the prime minister’s increasingly authoritarian rule: He has centralised his control over the security forces, cracked down on peaceful protests and frozen out political rivals.

Soldiers under his command have been accused this year of illegally detaining protesters, intimidating journalists and running secret prisons.

“It’s not about individual institutions, it’s about the way Maliki is governing,” ICG’s Hiltermann said.

“Is he going to allow checks and balances to be built into the political system, or not? The thing is, right now, there’s no political pressure for him to do so.”