A picture may be worth 1,000 words, but Narces Benoit’s decision to videotape a shooting by Miami police landed him in jail after officers smashed his cell-phone camera.

It was 4am on May 30 when Benoit and his girlfriend Erika Davis saw officers firing dozens of bullets into a car driven by Raymond Herisse, a suspect who hit a police officer and other vehicles while driving recklessly. Herisse died in the hail of lead, and four bystanders also suffered gunshot wounds, the Miami Herald newspaper reported.

Police noticed the man filming the shooting and an officer jumped into his truck, and put a pistol to his head, Benoit said. The video shows officers crowding around Herisse’s vehicle before opening fire, followed by indistinguishable yelling at onlookers, including Benoit, to stop filming.

The cop yelled: “Wanna be a [expletive] paparazzi?” Benoit recounted in a TV interview.

“My phone was smashed, he stepped on it, handcuffed me,” the 35-year-old car stereo technician told CNN.
Despite his phone being destroyed, Benoit was able to save the footage by taking the memory card out of the device and putting it in his mouth before handing it over to police, he said, adding that officers smashed several other cameras in the chaos which followed the shooting.

“There are two questions at play here that need to be separated,” said Eugene Volokh, a professor of law at the University of California. “One is: to what extent is it illegal to record officers doing their duties? And secondly, did the police destroy someone’s property and evidence?”

“Whether or not the recording was illegal, the police conduct as alleged would be illegal in any case,” Volokh told Al Jazeera. In Florida, it is legal to record conversations, unless the conversation is “confidential”, which this public altercation likely was not, Volokh said.

After having his phone smashed, and being taken to a police station to be photographed, Benoit was summoned to appear before the state attorney on June 3 with “any and all video and all corresponding audio recorded on May 30 that captured incidents occurring [sic] prior to, during and after a police-involved shooting”, according to court documents.

Benoit and Davis have hired a lawyer. The couple stopped giving interviews soon after the incident, Reese Harvey, their attorney, told Al Jazeera. Harvey also declined to comment about the couple’s possible plans for legal action against the Miami police.

The incident is the latest in a series of debacles involving citizens using mobile phones to record police actions.

“The impact of citizen recording of police brutality, or activity in general goes back at least 20 years to the LA riots,” said James Hughes, executive director of the Institute for Ethics and Emerging Technologies, a research organisation. “It increasingly raises questions about surveillance; whether surveillance from citizens can put a check on power,” he told Al Jazeera.

Sparked by video of police beating Rodney King, in what many saw as an example of institutionalised racism, the 1992 Los Angeles riots left more than 50 people dead and caused about $1bn in property damage.

“As almost everyone in the US has a cameraphone at this point, it’s very common to have any kind of police activity in a crowded setting recorded by citizens, usually from multiple angles,” said Jamais Cascio, a research fellow at the Institute for the Future. “These kinds of events are unusual and people will want to show friends and family, and, increasingly, because people are learning that it can be important to have evidence of police misconduct.”

And, with the spread of easily accessible recording technology, US security forces are being joined by counter-parts around the globe in being concerned about mobile technologies.

“Echoes of Rodney King in Karachi and Miami”, was the headline of a New York Times blog, analysing a recent case from Pakistan, where a television journalist recorded security forces killing Sarfraz Shah, an apparently unarmed teenager. The video sparked protests across the country.

Speaking about the recent case in Florida, Police Chief Carlos Noriega told the Miami Herald that the couple’s allegations were the first he’d heard of officers allegedly threatening people or destroying cameras or mobile phones.

“It was quite a chaotic scene,” the chief said of the late night shooting. “We were trying to figure out who was who and it was a difficult process. Not once did I see cameras being taken or smashed,” he said, adding that Benoit’s video is evidence which could help investigators.

While visual evidence, through government surveillance cameras and individuals’ phones, can help make prosecutions, police unions and likeminded groups argue that police officers might second-guess themselves if they know they are being recorded and delay making necessary decisions. There are also arguments about privacy; mainly that conversations between private individuals and security forces should not be recorded by third parties.

And even though Eugene Volokh and other legal experts believe recording public police activities isn’t a crime in Florida, that doesn’t mean police are happy about it.

“In the United States, the laws about the recording of police activity vary considerably from state to state. In Massachusetts, for example, existing laws that forbid recording someone without their permission have been extended to prohibit the recording of police. In Illinois, the law now explicitly bans the recording of police,” Cascio told Al Jazeera. “I believe that citizens should have the right to record the actions of officials on duty; Citizens can’t really fight back when they see police misconduct, their only tool is the ability to document the misbehaviour.”

Some experts argue that laws, often designed to deal with audio wiretapping of telephone conversations and now applied to video recordings, are not keeping pace with new technologies. Volokh, however, is not one of those people.

“It isn’t a technical question; it might be a question about basic values,” Volokh, the legal scholar, said. “How much do you value people’s ability to gather the news and how much you value privacy?”

There may be a debate on whether the increasing frequency of security forces, and society in general, being caught on tape is primarily a technological question or an issue of values. But advances in the former may make debates about the latter redundant.

“Efforts to forbid these recordings are ultimately futile. Cameras are becoming smaller, and are able to record and upload video quickly. I’ve seen otherwise normal-looking glasses with built-in cameras,” Cascio said. “The technology is rapidly outpacing any attempt to control it using dated and misapplied laws.” 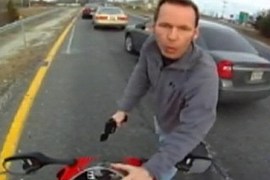 Facing prison for filming US police

A US man may face 16 years in prison for posting a video of his arrest on Youtube.