The man who was once the world’s fastest bowler is holding court at a hotel bar in Kuala Lumpur, talking about World Cups, winning teams and great players.

But Australian legend Jeff Thomson isn’t waxing lyrical about the sport that made him famous.

From his days as a rebellious teenager in Sydney’s southwest to his life today as a polished 60-year-old speaker on the after-dinner circuit, ‘Thommo’ has always preferred football over cricket.

As a teenager in the late 1960s, he played on semi-professional level for the Melita Eagles in the Sydney competition and says he earned more from the beautiful game than he did in his first Test matches.

“With cricket, I had to pay to play in the early days,” Thomson said on a recent trip to Asia in support of a breast cancer charity.

“And then even when I started playing for Australia, I would only get A$200 a match. I was getting
A$400 for wins in football.

“Honestly I’ve always loved football more than cricket. I don’t know why I chose cricket. I guess I was on the up-and-up and cricket started to kick-in.”

Thomson grew up in the Bankstown district of Sydney, where many football-loving European immigrants settled after World War II.

A gifted natural athlete who excelled at most sports, he was an attacking midfielder with an eye for goal.

“I was a number-6 who could kick with either foot, tackled hard, ran all day and could throw in for miles,” he said.

“I would hang back a little bit behind the centre forward as an attacking midfielder. I just liked chasing the ball around.”

He played cricket in the summer and football in the winter.

As a cricketer, he was a relatively late bloomer, making his first-class debut in the 1972-73 season at the age of 22. After only five games for his state side, New South Wales, he was thrown into the Australian team to make his Test debut against Pakistan in December 1972.

By the 1974-75 home Ashes series, Thomson was living in Brisbane and had formed a lethal fast bowling partnership with Western Australia’s Dennis Lillee. He took 33 English wickets as Ian Chappell’s Aussies won by four matches to one.

During the series, one of his deliveries with his famous slingshot action was recorded at a then world-fastest speed of more than 160 km/h.

But had Thomson’s football career taken a different turn, he may never have gone on to take 200 Test wickets and terrorise international batsmen for more than a decade.

A couple of years before making his first-class cricket debut, Thomson received a life-ban from football in New South Wales after being found guilty of the ultimate sin: striking a referee.

“It was a bit unlucky,” he chuckled.

“This referee jumped at my hand. He just hit my hand with his face!”

Thomson admits that he was often on the wrong side of officials, both on and off the field.

Another infamous episode saw ‘Thommo’ get his hands on the entire kit of Manchester United during their 1968 tour of Australia.

Little did his friends know that the Dennis Law jersey that he proudly wore was more than just a replica.

“I just came across them,” he said, cryptically.

“The club I played for bought them and somehow or other, they ended up in my place… the whole lot of them! It was just luck.”

Even approaching his 61st birthday and with a bad leg in need of a knee replacement operation, Thomson is still a tanned, strapping man who looks in excellent shape. The bleached blonde hair has been replaced by a white mane.

His forehead is suspiciously free of worry lines.

Today, his connection to his original sporting passion is renewed every year when he takes his extended holiday to the UK, hooking up with English football identities like Mick Harford and Joe Kinnear and Andy King to play golf.

The late George Best was also a friend, as was Vinny Jones before he chased the bright lights of Hollywood.

“This place I used to stay at in the UK is a health farm and those guys used to stay there as well,” he said.

“There’s a whole list of them that goes on and on. We all play golf together every year.”

When it comes to clubs he supports, Thomson follows reigning A-League champions, Brisbane Roar, but has divided loyalties in the English Premier League.

“I used to like Arsenal when blokes like Charlie George played but I’m not so much a huge Arsenal fan now,” he said.

“They do have a lot of skilled players but they need some tough men in there to make it a bit easier for their fancy players. Teams like Liverpool I’ve always enjoyed. I’m not a big Man United fan but you’ve got to take your hat off to them because every year they’re always up there.”

Thomson has admired the progress made by the Socceroos who’ve qualified for the past two World Cups.

An old friend from his football days is Rale Rasic, who was coach of the trail-blazing Australian side that made it to the 1974 finals in West Germany.

“It was fantastic that we qualified in 2006 after so long,” he said.

“The thing that really annoyed me was how we got ‘dudded’ (cheated) against Italy. I reckon if we got through that game we might have won the whole bloody Cup! But I don’t think the big boys didn’t want Australia to win it.”

Thommo’s conversational style isn’t unlike the way he used to bowl: fast, direct and with a tendency to rise off a length when you don’t expect it.

One suspects that if that referee hadn’t hit his hand with his face 40 years ago, he might have been part of Australian folklore in a quite different game. 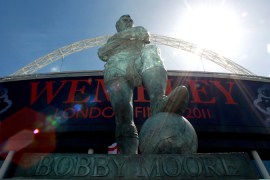 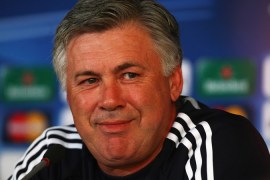 The cool of Carlo Ancelotti

As manager of Abramovich’s Chelsea the pressure is always on Ancelotti. However, so far, he has dealt with it very well 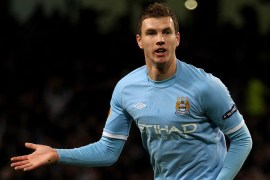 Getting it right in the player business