As darkness fell across it, Deraa was a city under siege.

Tanks and troops control all roads in and out. Inside the city, shops are shuttered and nobody dare walk the once bustling market streets, today transformed into the kill zone of rooftop snipers.

Trapped and terrified inside their homes, families are running low on food and drinking water, with many water tanks shot and emptied. Electricity has been cut, as have all mobile and fixed phone lines. The internet, so vital in broadcasting images of the regime’s armed crackdown on peaceful protestors, is down.

Unable to crush the people who first dared rise up against him – neither with the secret police, paid thugs or the special forces of his brother’s military division – President Bashar al-Assad has sent thousands of Syrian soldiers and their heavy weaponry into Deraa for an operation the regime wants nobody in the world to see.

“We have no electricity, no water and we couldn’t get the injured to hospitals or clinics,” said Abdullah, a 26-year-old resident of Deraa who arrived in Damascus today and spoke to a journalist. “An army unit has begun to take the wounded and the corpses from the streets.”

Though almost all communication channels with Deraa have been cut, including the Jordanian mobile service that reaches into the city from just across the border, Al Jazeera has gathered firsthand accounts of life inside the city from residents who just left or from eyewitnesses inside who were able to get outside the blackout area.

The picture that emerges is of a dark and deadly security arena, one driven by the actions of the secret police and their rooftop snipers, in which soldiers and protestors alike are being killed or wounded, in which cracks are emerging in the military itself, and in which is created the very chaos which the regime uses to justify its escalating crackdown.

‘They dress in black’

Speaking to Al Jazeera Arabic early Wednesday evening, a Deraa resident who gave his name as Nimr al Deraawi, described a situation in which residents were unable to move for fear of sniper fire while an apparent military battle raged around them.

“If you put your head out of the window you get a bullet in your head,” said Deraawi. “Homes on Yarmouk highway have been destroyed. My home has been hit by machine gun fire. Six pharmacies have been burned down and the army has occupied all hospitals.”

Leading the assault on Deraa are the elite forces of the Fourth Division of the army, commanded by President Assad’s brother Maher al-Assad, who has deployed his troops in the city since the early days of the uprising, according to multiple eyewitness accounts.

“They dress in black and are large and muscular,” said one resident, speaking of Maher al-Assad’s men. “They have a red stripe on one shoulder. I’ve seen them at night and members of my family have described them to me.”

On April 8, when 25 unarmed protestors were killed, the people of Deraa directly blamed the Fourth Division for the deaths. “Hey Maher you coward, take your dogs to the Golan,” the enraged crowd shouted, referring to the Israeli-occupied Syrian Golan Heights.

Syria’s counter-terrorism forces may also have been deployed into the murky security arena of Deraa, according to the account given by Deraawi.

Distinguished from other forces by wearing training shoes with their military uniforms, the troops had opened fire on an unknown target, said Deraawi. He also told Al Jazeera he saw tanks opening fire and four tanks ablaze.

On Monday unconfirmed reports surfaced of Syrian military units clashing with each other in Deraa when soldiers refused to open fire. There have also been several unconfirmed reports from opposition sources of a spate of assassinations of military officials said to be sympathetic to the protesters.

Last week the state-run news agency SANA reported the deaths of General Abdo Khodr Tellawi from Homs, and his two sons and a nephew. SANA claimed the men had been killed by “armed criminal gangs […] in cold blood.”

On Monday the Christian Science Monitor reported opposition activists claiming the Syrian intelligence services executed the general, his sons and nephew because they were showing signs of sympathy for the protesters.

Abdullah, who arrived in Damascus from Deraa on Wednesday, confirmed exchanges of fire were still taking place.

“The army is fighting with some armed groups because there was heavy shooting from two sides,” he said. “I cannot say who the other side is, but I can say now that it is so hard for civilians.”

Abdullah said the military assault on Deraa appeared to be escalating. Even as he left the border city to return to work in Damascus, Abdullah said he saw lines of tank-carrying lorries steaming south. “They are preparing for a big operation. It is not finished yet.”

With the fog of war descended on this once tranquil farming community, who exactly is engaged in the battle in Deraa remains far from clear. Yet for civilians caught up in it, the consequences of stepping outside are fatal.

The regime has said it sent the army into Deraa on Monday in order to hunt down “extremist terrorist groups,” according to SANA.

The regime’s claim that the opposition has taken up arms against it was given a boost on Tuesday by a leading US academic expert on Syria, Joshua Landis, who is Director of the Centre for Middle East Studies at the University of Oklahoma.

“In the face of the state’s superior military and willingness to use force, the opposition will be forced to turn to military means itself,” said Landis on his influential blog, Syria Comment. “The opposition leadership has already been able to smuggle loads of satellite phones and electronic equipment in to reinforce their activists inside the country. Smuggling arms will not be hard.”

Landis reported that nine soldiers had been shot “by armed opposition elements” while driving down the main highway into Banias, the coastal city where mass anti-regime demonstrations have taken place.

Syria Comment did not give a source for the claim the killing had been perpetrated by the opposition, though Landis did note that one of the dead soldiers, Lieutenant Colonel Yasir Qashur, was a cousin of his Syrian wife.

In contrast to such claims, as happened in Lattakia with pro-Assad militias, known as shabeha, residents of Deraa have consistently reported the presence of plain clothes security on the streets and snipers on rooftops who have shot at unarmed protestors and funeral processions, transforming a scene of civil disobedience into one of deadly chaos.

Firing on mourners and army

In a written account to an Al Jazeera reporter on Wednesday a relative of Ousama el Heraki, who was killed by security forces during a protest last Friday in Herak, a village close to Deraa, described how the funeral procession for Heraki the following day had descended into bloodshed after Syrian security opened fire on both the mourners and the army.

“There is a large military checkpoint between Herak and Mleyha, with sandbags and machine guns, the same as Deraa. When the funeral procession came close to the checkpoint we were chanting ‘The people want to topple this regime’ and ‘The people and army are one hand.”

At this point Heraki’s cousin, who is in his late 20s, said he saw a group of men break off from the main funeral procession and take off their jackets to reveal military uniforms.

“They stood among the soldiers and started swearing at protestors, saying ‘Bashar is going to be your ruler forever and he’ll step on your necks with his boot.’ So the people got angry and started swearing back. Then we heard someone open fire on us. We do not know where it was coming from.”

The natural reaction of the crowd was to surge forward, into the checkpoint. The mourners began fighting with the soldiers, desperate to escape to safety.

“As that happened some soldiers also got shot,” said Heraki’s relative. “Definitely the shots did not come from our side. When the other soldiers saw that some of their men had been killed they opened fire. At that moment I did not know who was shooting at who. It was complete chaos.”

During the five-week uprising in Syria, the use of snipers to fire on unarmed crowds has been documented in the coastal cities of Banias, Jabla and Lattakia, in the central industrial city of Homs and in towns close to Damascus, Harasta, Daraya and Duma.

“The secret police are shooting at civilians and sometimes at soldiers. Then they withdraw and leave just the army and the protestors,” said Heraki’s relative.

“Before Monday the [regular] army had nothing to do with shooting people. Demonstrations used to pass by the army but they did nothing. Even when I was stopped at a checkpoint they always treated me with respect. I really hope the army are not involved now with what is going on in Deraa, this big crime.”

A document obtained by opposition activists and released earlier this month purportedly written by the Syrian General Intelligence department appears to outlines instructions for the extreme lengths security forces should go to in quelling the uprising.

“It is acceptable to shoot some of the security agents or army officers in order to further deceive the enemy, which will further help the situation by provoking the animosity of the army against the protesters,” reads the document, dated March 23, a week after the protests began in earnest in Deraa. The validity of the document could not be confirmed.

Yet despite the military siege, the snipers on the rooftops and the secret police within their midst, Abdullah said the people of Deraa would continue their protests against President Assad and his regime.

“Deraa’s people will never stop their demonstrations and on Friday the world will witness the largest protest yet in every village and town,” said Abdullah. “The government is sending more troops and tanks but they can’t defeat the people’s will.” 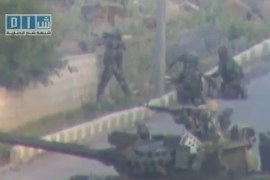 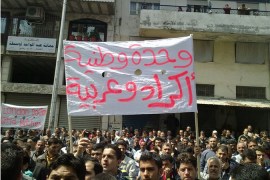 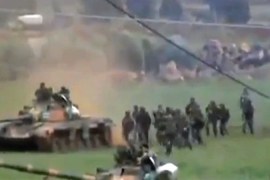 At least nine deaths reported in coastal city of Jableh as funerals are held for victims of government crackdown. 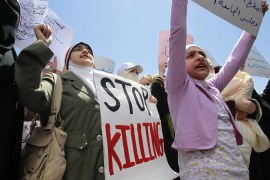