Syrian authorities may have decided to lift the dreaded emergency laws in force in the country since the ruling Baath Party took power in 1963, but experts and analysts say the move will do little to improve human rights.

According to them, many of the draconian charges on which opponents of the regime are routinely imprisoned exist either within the Penal Code itself or as special laws or articles in the constitution, and courtesy them, Syria would continue to be run as a virtual police state.

“There are 15 branches of security in Syria and all of them will remain immune from prosecution, even after emergency laws are lifted. The security services are above the law,” said Haithem Maleh, a former judge and veteran human rights campaigner, imprisoned many times in Syria for his work.

The lifting of emergency laws has been a major demand of the month-long unprecedented protest movement against the regime.

Shaken by the protests, Bashar al-Assad, the president, pledged a few days ago to lift the laws. And on Tuesday, the Syrian cabinet approved the move.

It was initially thought the authorities would bring in a new set of draconian laws to replace the emergency laws.

But according to a leading Syrian newspaper owned by the president’s brother-in-law, no new anti-terrorism law is on the anvil.

The existing criminal laws of Syria’s Penal Code have been deemed sufficient to counter the threat of terrorism, said an article in Al Watan newspaper, owned by Syria’s most powerful businessman, Rami Makhlouf, on Wednesday.

“What will be issued by the President of the Republic will not be a law for combatting terrorism only that to lift the state of emergency,” said the paper, quoting an anonymous senior official. “The special articles contained in the Syrian Penal Code related to terrorism are sufficient.”

What is deemed sufficient by the authorities should ring the alarm bells for ordinary Syrians.

In 2008 President Assad extended immunity from prosecution to all branches of Syria’s security services under a presidential decree which will remain unaffected by the lifting of emergency laws.

“They are trying to give everything they can but without touching the foundations of the totalitarian regime,” said Ziadeh. “What Syria needs is a new constitution that makes a clear explanation of executive, judicial and legislative powers. Now they are all mixed up in the powers of the president.”

The lifting of emergency laws would not mean an end to the arrest of political opponents, said Ziadeh, pointing out that it was under criminal laws, not emergency laws, that member of the Damascus Declaration, the first unified opposition movement in Syria, were jailed in 2005.

Key signatories of the Declaration were jailed for up to five years on charges including “weakening national sentiment”, “belonging to a secret society” and “spreading false news”.

All of the charges refer to Syria being “at war or expecting a war”, but rather than being articles of the emergency laws – whose half century extension officials regularly justify because of Israel’s occupation of the Syrian Golan Heights – the charges are inside the Penal Code and so will be unaffected when emergency laws are lifted.

Also unaffected will be Law 49, making membership of the Muslim Brotherhood a crime punishable by death, and certain articles of Syria’s Constitution – written in 1973, a decade after the declaration of emergency law – such as Article 8 which gives the Baath Party the right to be “the leading party of state and society”.

A law protecting the Baath Party revolution, passed in 1965, will also be unchanged by the lifting of emergency laws, meaning citizens can still be imprisoned on charges of “working against the goals of the revolution”.

Sami Moubayed, a Syrian historian and editor of Forward magazine, argued that without comprehensive political and economic reforms, the lifting of emergency laws would do little to meet the demands of protesters.

“Lifting emergency laws without increasing economic prospects is absolutely useless. There also needs to be a political solution: An end to one party rule, political freedom and a strong and serious campaign against corruption.”

Moubayed said he believed a law allowing multi-party politics in Syria for the first time under Baath Party rule would come into force ahead of this year’s parliamentary elections, due to be held in May but likely to be postponed until September.  But he cautioned over-expectations of dramatic change.

“The Party’s Law will make no real difference until 2015. No party this year will have time to mount a real challenge to the Baath Party, which has some 1.5 million members,” he said.

For at least one protester in Baniyas, taking to the street on Tuesday night after news broke of the cabinet decision to lift emergency laws, the concession was too little too late. 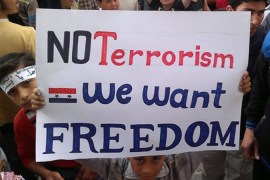