Windows shattered and the houses shuddered from the blasts of another incoming rocket attack. In the besieged west Libyan city of Misurata, families huddled together, waiting, praying that their home would not be the next to be hit.

The violent warfare raging between those loyal to Muammar Gaddafi and opposition troops is having a devastating impact on the lives of the city’s civilians.

The wealthy seaside suburb of Ghasr Ahmed is scarred with shrapnel, unexploded rockets and destroyed buildings. Beside the children’s swings and a well-tended salad patch there is a pile of rubble that was once the opulent home of four families. Shards of shrapnel from the blast are embedded in the mosque over 100 metres away.

A grocery store was flattened in a nearby street one morning last week. “When they hit the shop, there were 15 [people] inside. They struck early [in the] morning; many women were shopping with their children there. The ambulance took them to hospital, I don’t know how many died,” says shop owner Ibrahim Mohammed Guzi.

The tin roof of the British Petroleum warehouse is now a patterned constellation; the shrapnel of a rocket has littered the dark painted roof with holes that reveal the sunlight outside.

The bed where Mohammed Jabo slept in a house nearby is strewn with concrete debris from the hole in the roof where another rocket hit – just above where he and his wife were sleeping. They survived the blast, but Jabo lost his leg.

“There is nothing here, why did he [Gaddafi] do this?” asks Ibrahim Ali, crying over the devastation and terror he has witnessed.

The main targets of the attacks by Gaddafi forces are most likely the nearby oil and steel companies and the petrol station. But the onslaughts are so erratic as to appear indiscriminate. Residents say that more than 23 homes have been destroyed by tank and artillery rounds in the last month.

In the centre of Misurata, the central hospital, which was closed for renovation, has become a stronghold for Gaddafi’s forces as they battle to regain control of the area. The wounded are now taken to clinics dotted around the city. But as the fighting mounts, hospitals are struggling to cope with the influx of civilian casualties.

“There are too many, sometimes you find the patients lying in the corridors,” says Dr Ramadan Atewah, a heart and lung surgeon in the UK who returned to Libya 10 days ago.

Doctors in the city say that at least 600 people have died and 3,000 have been wounded in the six weeks of fighting. Four-hundred more are missing. “We think Gaddafi forces have killed and then buried many bodies,” explained the director of one of the clinics.

The vast majority of the fatalities and injuries – as much as 80 per cent – are civilian, says Atewah. “The shelling of civilians is the most pressing problem; they are being hit with mortars and rockets. They don’t have the knowhow to stay down, in terror they run, and that is when they get hit.”

Anaesthetic and other medical essentials are running dangerously low, he adds.

In the Red Crescent clinic nearby, 17-year-old Abdul Rahman Larbah has a fractured arm and leg and internal bleeding after he was hit while walking home.

Dr Mohammed Ahmed Eifagieh rifles through reams of videos on his phone displaying the horrific injuries he has had to operate on recently: A man’s jaw flops at a sickening angle after a bullet tore through his mouth, a toddler’s arm riddled with shrapnel, multiple bullet wounds.

Eifagieh says loyalist snipers remain positioned on the roofs of much of Tripoli Street, the central avenue in Misurata. “They shoot indiscriminately at civilians, this boy bled to death in the street,” he explains, showing a picture of a lifeless body. “We could have saved his life but nobody could get to him because they too would be shot.”

Most families have abandoned the devastated neighbourhood around Tripoli Street, which is now one of Misurata’s three front lines. Hundreds have moved into public buildings on the rebel held side.

A school just a few kilometres from the front line is now home to dozens of families. Children play in the courtyard, uttering “Gaddafi is a dog” to visiting strangers – a phrase picked up more by imitation than intent. This is a war they are too young to understand.

Saleh Hamid fled his home with his elderly mother and three children. They were one of the last families to leave the area. For six weeks they stayed under lock and key in their house. “We didn’t realise everyone else had left,” he says.

Gaddafi forces entered their home on Tripoli Street, robbing valuables and threatening the family. He and his family escaped – crawling through the district at night to avoid being spotted by snipers.

The rebels show remarkable organisation on Misurata’s streets. In less than two weeks they established a council, complete with committees in charge of directing operations in the city.

The city is lined with defensive road blocks and sandbags, while foodstalls are dispersed throughout the area to ensure that too many people do not gather in one location.

A rebel councillor explains that otherwise “they might become a target”. 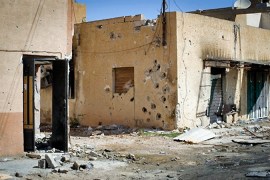 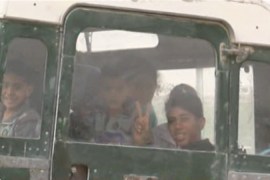 The displaced children of Libya

The sons and daughters of those who fled from fighting wonder when they can go home. 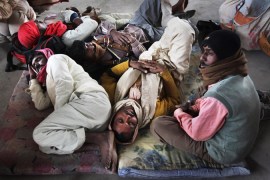 A perilous journey to Misurata

Sometimes, just getting to the front lines can be the most hazardous part of a journey in Libya. 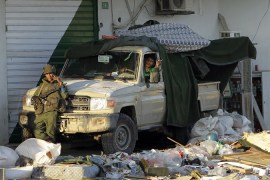 Rebels warn of ‘massacre’ in Misurata