Hugo Chavez’s offer to mediate in the Libyan crisis marks the Venezuelan president’s latest attention-grabbing foray onto the world stage yet analysts warn that he risks “ending up on the wrong side of history” if he stands by Muammar Gaddafi’s internationally discredited regime.

While the Arab League says it is studying Chavez’s proposal, both the US and France were quick to dismiss any role for a controversial character who has been almost alone among world leaders in refusing to condemn the embattled Libyan leader.

Chavez, a past recipient of Gaddafi’s human rights prize, has said it would be “hypocritical” of him to criticise a man he once called “one of the great leaders of this century”.

But Nikolas Kozloff, author of several books on South America including Hugo Chavez: Oil, Politics and the Challenges to the United States, told Al Jazeera that any mediation initiative involving Chavez would be compromised from the start.

Charles Jones, a Latin American specialist at Cambridge University’s Centre of International Studies, said Chavez probably hoped to bolster his image as an international statesman capable of offering an alternative to western-led diplomatic initiatives, rather than being motivated by any personal sympathy for Gaddafi.

“Any advantage Chavez might gain from this has less to do with backing Gaddafi as with being seen as the leader of a group that finds some sort of diplomatic solution,” he said.

For instance, Nicaragua and Costa Rica last year accepted mediation from Mexico and Guatemala over a border dispute, while Chavez has offered to mediate between the Colombian government and rebel groups, as well as in Honduras following the ousting of Manuel Zelaya, the country’s president, in 2009.

Miguel Tinker Salas, author of The Enduring Legacy: Oil, Culture and Society in Venezuela, agreed that Chavez’s motivation was primarily to promote Venezuela as a country with diplomatic clout. But he said the offer of mediation was welcome nonetheless.

“It’s a game of brinksmanship at some level, but it’s also the first effort from any source to bring these sides to a conversation, if that’s even possible,” he said.

But, Salas warned, the only scenario in which Chavez could emerge in a positive light would be in “facilitating the process in which Gaddafi leaves the country”.

“If he could provide an honourable way out for Gaddafi, in some ways that would reduce the tensions and provide for some transition. He could actually come out as a well-regarded mediator with international credibility – or he could end up on the wrong side of history.”

David Lehmann, Director of the Centre of Latin American Studies at Cambridge, also suggested that Chavez could play a useful role between Gaddafi and other Arab states because of their close ties through OPEC, the global oil monopoly.

“Gaddafi has been expelled from the Arab League and the Saudis despise him. Most of his friendships are to the south, so you could imagine the Arab League might want somebody to come in and mediate,” Lehmann said.

But Kozloff said Venezuela’s relationship with Libya highlighted bigger issues regarding Chavez’s foreign policy, which has seen the South American country forge high-profile strategic partnerships with states such as Iran, Russia and Belarus in an effort to build a “multipolar” alternative to Western supremacy.

Some see a contradiction between human rights abuses in those regimes and Chavez’s “21st century socialism” ideology.

“While it’s understandable that you’d want to build this multipolar world against western imperialism, if that multipolarism consists of Russia, China, and a bunch of authoritarian regimes then what use is a multipolar world?” Kozloff said.

Chavez also risked finding himself isolated from the revolts sweeping the Arab world, with possible implications for his leftist credentials at home and abroad.

“Rather than expressing solidarity with this anachronistic generation, he should be allied with the modern day movement in Egypt and elsewhere,” said Kozloff. “If he becomes involved in mediation [on behalf of Gaddafi], then some in South America may not view that as particularly progressive.”

Gregory Wilpert, co-founder of the Venezuela Analysis website, said there had been a “vigorous debate” within the pro-Chavez camp in Venezuela over the regime’s ties to Libya.

“One segment is defending Gaddafi as a fellow revolutionary and another camp is condemning him and is urging the government to do so too,” said Wilpert.

“Opponents of Chavez are of course trying to take maximum advantage of Chavez’s ties to Gaddafi by displaying this as proof that Chavez himself is an autocrat.”

But others suggest ties between Gaddafi and Chavez have been overstated. Despite “similarities of style” and a “kinship of personality”, Charles Jones said Chavez would “bridle at Gaddafi’s total disregard for constitutionality… Chavez places huge emphasis on elections and public support.”

Jonathan Di John, a Venezuelan expert at the University of London’s School of Oriental and African Studies, said Chavez’s intentions were “far more socially democratic than Gadaffi’s” and questioned whether his involvement in Libya would do him any serious harm domestically.

Chavez’s legitimacy at home was built primarily on channeling Venezuela’s oil wealth to the poor, he said. “He’s a politician who begins an election with a 25 to 30 per cent core support base which no other politician can match.”

Ultimately, said Di John, Chavez’s mediation offer was a low-risk gambit by a politician who has used anti-western rhetoric to bolster Venezuela’s profile – and who may not have ever expected his offer to be taken seriously.

“I don’t think as far as the US and some other countries are concerned they hold him in very high esteem anyway, so he doesn’t really have a lot to lose in that respect. Internal politics are going to decide much more what happens in Libya than who ends up mediating in the long run. So I don’t see a Nobel Peace Prize [for Chavez] on the horizon.” 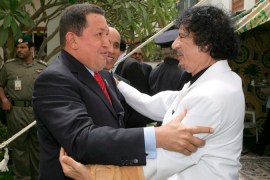 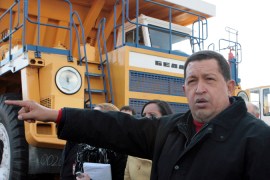