My experience of reporting from Egypt was not as harrowing as that of the nearly one dozen Al Jazeera employees who have been detained by the Egyptian military. But it does illustrate how quickly the situation turned ugly for foreign journalists – and, perhaps, why tens of thousands of Egyptians turned so hostile to the press.

I arrived in Cairo on January 30, and the first few days were a pleasure: The protesters in Tahrir Square were welcoming to foreign journalists, and a curious calm permeated the streets away from downtown.

Even the “neighbourhood watch” groups – the gangs of armed men who patrolled Cairo’s residential neighbourhoods – were friendly and willing to talk. “We were not worried about you,” said one man wielding a steel rod near Talaat Harb Square in downtown Cairo on Sunday night.

Even the loyalists of Hosni Mubarak, the Egyptian president, roaming the streets on Wednesday morning (February 2) were initially willing to talk to reporters. I passed one of them in the Doqqi neighborhood around 11:00am local time, and several men stopped to pose for pictures; one invited me to follow them as they marched. “Where is Al Jazeera?”

As they crossed the 26th of July bridge, their ranks beginning to swell outside the foreign ministry and the state television building, most were still peaceful and willing to talk. But their tone was aggressive, their words vitriolic, a stark contrast with the then-peaceful scene in Tahrir Square. “ElBaradei is a dog, a Western dog,” yelled one red-faced man, referring to Mohamed ElBaradei, the former IAEA chief. “You should get out of here. You and your country should stop meddling in Egypt,” warned another after hearing I was an American.

The crowd – tens of thousands strong at this point – was particularly incensed at Al Jazeera. “Al Jazeera fain, al-sha’ab al-masri hown (Where is Al Jazeera? The Egyptian people are here!),” they chanted. ” This was when I decided to stop identifying myself as an Al Jazeera reporter – I became a freelancer or a blogger.

I asked several protesters why they were so angry, and they accused our coverage of bias against the government, of “hyping” the protests. (Al Jazeera has, of course, given ample airtime to the Mubarak government, the ruling National Democratic Party, and its supporters.)

It was once they reached the area outside the Egyptian Museum that the pro-Mubarak crowd turned hostile to journalists and foreigners in general. I was yelled at as I advanced towards Tahrir Square –kalb (dog) and yehudi (Jew) were common – and those shouts quickly turned to shoves, kicks, and a few large rocks thrown in my direction. By around 3pm local time, when a group of boys on camels and horses led a “cavalry charge” towards the pro-democracy protesters, the crowd was openly aggressive towards foreigners.

Much of their anger seemed to be caused by embarrassment – a sense that this was an internal Egyptian issue, that the bloody protests playing out on Cairo’s streets should not be televised for the world.

It remained that way throughout the night, and on Thursday morning. I tried to leave my hotel three times to venture into Tahrir Square. The first time, around 7:30am local time, a colleague and I made it maybe 100 yards from the front door. A group of five young men – several with bloodied faces from the night’s fighting – ran over yelling in Arabic. “Rayih fain?” “Where are you going?” One of them jabbed a knife into my chest, and the others formed a ring around me, yelling about how Egypt was not my country and I should leave. They eventually shoved me back towards the hotel, following me long enough to throw a few punches and kicks.

The final excursion ended just outside the door of my hotel, when an Egyptian man walking by wrapped an arm around my shoulders and fixed me with an earnest stare. “You don’t want to go out there,” he said, making a slicing motion across his throat.

The situation remained tense on Friday, Saturday and Sunday. The streets around Tahrir Square were relatively safe, thanks to an increased army presence, but the rest of Cairo remained dangerous: two of my colleagues were pulled from their car and threatened with machetes by an angry mob.

Journalists were edgy downtown, too, because the army was playing a double game – securing the area, yes, but also arresting reporters (most of those detained on Wednesday and Thursday were grabbed by the army).

At one army checkpoint on the way to Tahrir Square, a man in street clothes – undoubtedly from an intelligence unit – rifled through my passport and asked questions about why I was in Egypt, where I was walking, what I wanted to see. (He stopped, fortunately, before reaching the page with my Qatari work visa, which lists Al Jazeera as my employer.)

Tahrir Square remained the safest place in Cairo to be a journalist. After crossing the square’s first security checkpoint on Friday – which was manned by pro-democracy protesters – a young man escorted me and a colleague to the “press officer”, a young woman who offered to answer any questions. She also handed out a telephone number for an international journalists syndicate. “If you have any problems, call this number,” she told us.

Aside from the Mubarak loyalists, most Egyptians were willing – many even eager – to talk with the media. But some did worry that the international media attention, the influx of foreign journalists, was portraying their country in a bad light. “Egypt should not show this face to the world,” one man told me on Friday as I walked along the Corniche. 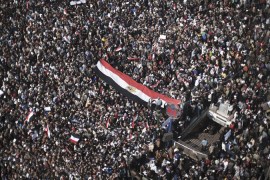 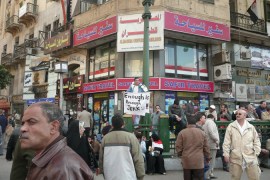 The different shades of Tahrir

Even after two weeks, central Cairo’s Tahrir Square remains the heartbeat of the pro-democracy movement. 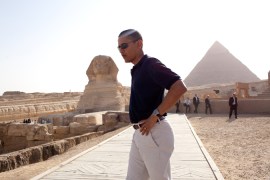 Marwan Bishara argues it is time for changing Obama’s Mideast team and Washington’s policy towards Egypt.

Despite government concessions, pro-democracy protesters are standing their ground.