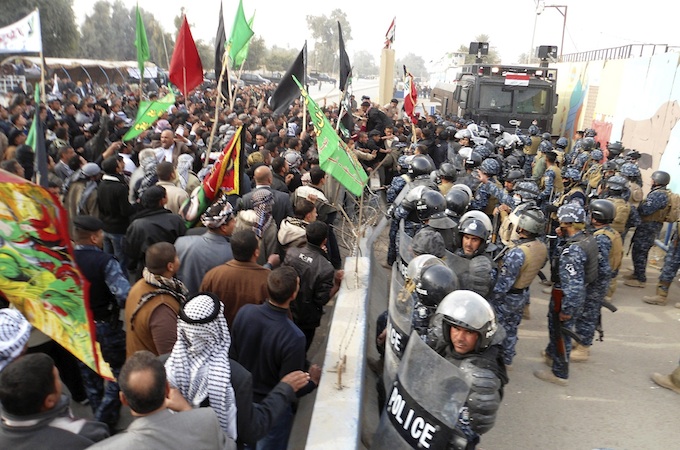 Baghdad, Iraq – The divisions in Iraq are not just personal: Nearly half of Iraq’s 18 provinces have either declared semi-autonomy from the government in Baghdad or are planning such a split in the near future.

The Iraqi constitution allows any province, or group of provinces, to become an autonomous region, which gives the local government more control over managing its internal affairs. One such region exists already: The Kurdistan Regional Government, which has authority over Irbil, Dohuk and Sulaymaniyah provinces in northern Iraq.

But now at least four other Iraqi provinces are pushing for autonomy, a move which some Iraqis fear will irreparably break their country apart.

The bids for autonomy are fueled by a sense of neglect; Iraqis in these provinces feel they receive an unequal share of essential services and government jobs from Baghdad.

And there are indeed some stark regional differences: The unemployment rate in Anbar province is twice that of Baghdad; just one per cent of residents in Basra say they use the public water network (as opposed to 65 per cent nationwide), because the salinated water is often undrinkable, according to the United Nations.

Of the four provinces considering autonomy, Diyala has so far gone the furthest: The provincial council announced on Monday, by a vote of 18 to 11, that Diyala would become an autonomous region. 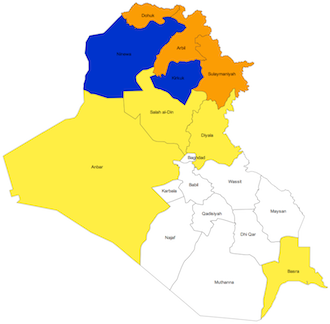 Provinces in orange are part of the Kurdish regional government; in yellow, considering autonomy; and in blue, the “disputed territories.” (click to enlarge)

But the announcement sparked large protests outside the council building in Baquba, the provincial capital; some of the protesters threatened to burn down the governor’s house unless he backed down. And so the decision was reversed within days, with local lawmakers saying they needed more time to discuss the issue.

The vote in Diyala’s provincial council fell largely along sectarian lines, with Sunni and Kurdish legislators voting in favor and the Shia voting against. But the protesters were a mixed group.

“Those who declared this province an autonomous region represent only one sect, but there are many sects and ethnicities in Diyala, and nobody asked all these people what they want,” said Sheikh Hussein al-Tai, the head of the local council in Khalis.

Neighbouring Salah al-Din province tried to organise a public referendum on autonomy in October. But Nouri al-Maliki, the Iraqi prime minister, blocked the referendum, calling it a sectarian bid to turn the province “into a secure refuge for Baathists,” members of Saddam Hussein’s former regime.

“This region will not see the light of day,” Maliki said in a statement. So the provincial council is now trying to organise its own referendum, independent of the electoral commission in Baghdad.

In Anbar province, where residents complain of neglect from the central government – poor basic services, limited job opportunities – a majority of the provincial council supports a bid for autonomy.

“Everything is in the hands of the prime minister, not even ministers… the provincial council has lost all its power to the centre,” said Eid Amash al-Kerbooli, a member of the council. “If the centre was really fair, all Iraqi provinces should have equal opportunities… we don’t accept to be second-class citisens.”

The issue has not yet come to a vote; members of the council are discussing it with local leaders. The governor of Anbar has tried to remain neutral, but said Baghdad’s neglect is pushing people towards autonomy.

The desire for a degree of independence is not limited to Iraq’s majority-Sunni regions, either. The provincial council in oil-rich Basra also wants to break from Baghdad, over what it considers an unfair distribution of the province’s energy revenues. Sabah al-Bazouni, the head of the council, called Basra “the most suitable province to become an autonomous region.”

Local leaders are particularly angry over a $17bn deal with Shell to develop three oilfields in southern Iraq, which they say the central government negotiated without their input.

Maliki has tried to block Basra’s bid as well: The province sent Baghdad a formal request for autonomy last year, and has not yet received a response.

“It is clear that the Kurdistan region is stable to a large extent because the governing parties there are a known factor,” said Ghanem Abdul-Amir al-Maliki, a member of the council. “In Baghdad, everyone is trying to satisfy his own party at the expense of others. We want to get rid of the political infighting in Baghdad by setting up a region.”

And finally there is the Kurdish region, where local leaders want to expand their jurisdiction. A population battle of sorts has played out in Ninewa, Kirkuk and Diyala over the last few years: Kurds have moved into these provinces, arguing that they are returning to homes from which they were displaced years ago by Saddam Hussein’s government.

Sunni Arabs say they are really are trying to tip the region’s demographics, to allow the Kurdish government to take control of more territory.

The issue of autonomy will be one of the most contentious in Iraqi politics over the next few years. Supporters say it is the only way to ensure their provinces are not neglected by Baghdad; opponents say it will weaken Iraq, allowing outside powers to gain influence in the autonomous regions. “Saudi Arabia will take one piece, Iran will take another, the Kurds will take another,” said Mohamed al-Jaburi, an architect in Baghdad. “What will be left?”

“There is a political and outside project to break the unity of Iraq and cut regions from it,” said Hikmat Suleiman, a member of Anbar’s provincial council who opposes the autonomy bid. “If in such circumstances we ask for a federal region in Anbar, we will enforce this project.”