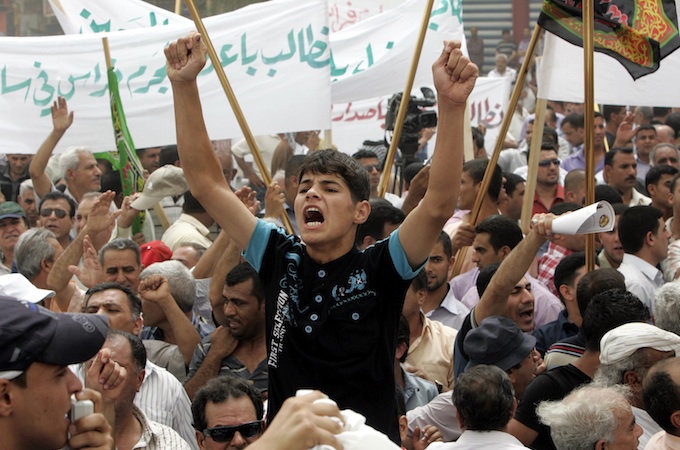 Baghdad, Iraq – Mohammed al-Jaburi, a 25-year-old architect, is emblematic of a growing problem in Iraq: He is an educated professional with a comfortable life here, and he is desperately hoping to leave that life behind.

After completing his studies in Jordan, al-Jaburi returned to Baghdad, where he now works for the firm which won the contract to reconstruct the Rashid, one of the top hotels in Baghdad. He is happily married and planning an overseas vacation with his wife; he drives around Baghdad in a new sports car.

But he’s also looking for a way out of the country, because he is also worried that the country’s fragile political consensus is close to collapsing.

“Of course there will be a civil war soon,” he said matter-of-factly. “I want to leave, I want to go back to Jordan, but my wife wants to stay here, and I cannot leave her.”

Iraq is a young country: About half of the 33 million people here are under the age of 20. They have grown up amidst constant conflict, their lives to date bookended by two US-led wars with a decade of harsh economic sanctions in the middle.

In conversations over the last two weeks with these young Iraqis, it has been difficult to find much optimism about the future of their country, even among those Iraqis with good jobs and comfortable lives.

And they tend to be the exception to the rule: Young Iraqis have an unemployment rate double that of the general population. Many lost friends and family members during the more than eight-year US-led war and occupation; posttraumatic stress disorder is not uncommon.

One in three of them are looking to leave the country, according to the United Nations survey, and in interviews many Iraqis say that figure is too low.

“I don’t know what is going to happen now, and that’s the scary thing, the fear of the unknown,” said Lubna Naji, a junior doctor at Al-Kindi hospital in Baghdad’s Rusafa district.

Unemployment officially stands at 16 per cent, a figure which many Iraqis say is much lower than the reality. The country’s per capita GDP, $3,800, puts oil-rich Iraq in the bottom third of nations, a notch above Mongolia. In the Arab world, only Yemen has a weaker economy.

Joblessness has a disproportionate effect on young people, particularly young men: A United Nations survey released in 2009, for example, found that men between the ages of 15 and 29 have a 28 per cent unemployment rate; they account for 57 per cent of jobless Iraqis.

Think of Iraq’s economy and you think of the oil sector, which accounts for 60 per cent of gross domestic product and 90 per cent of the government’s budget. But just one per cent of Iraqis actually work for oil and gas companies, according to government statistics.

The largest employer, by far, is the public sector, which employs some 40 per cent of the labour force, more than three million people.

“You have a lot of young people who have known only war and violence and sanctions,” said Peter Batchelor, the director of the United Nations Development Programme office in Baghdad. “[And] there is little or no prospect of jobs, of decent jobs, so many of them go to work for the government because it’s viewed as a safe place to work.”

The other alternative is leaving the country: One-third of unemployed Iraqis plan to emigrate in search of work, a UN Population Fund study found earlier this year. Several Iraqis compared their country to Lebanon, which has suffered a decades-long brain drain following the civil war.

The Iraqi government says it is trying to stimulate the private sector; it is planning to privatise a number of state-owned companies, for example, few of which have been profitable.

“It’s a ticking time bomb in Iraq,” Batchelor said. “The only thing young men can do is join armed groups, or take a job in a government ministry.”

‘The government is incompetent’

The other main concern for younger Iraqis, interestingly, seems to be not the country’s still-precarious security but the performance of the government.

A poll released this summer found young Iraqis more pessimistic than their elders: 54 per cent of young men said the government was taking the country in the wrong direction, for example, as opposed to 45 per cent of older men. (The poll defined “young” as people under 35.)

Their complaints are varied. Basic services are lacking: Most Iraqis receive just a few hours of electricity per day, and millions lack access to clean drinking water. Some 300,000 Iraqis have never attended school. Naji, the doctor, said many of the country’s medical facilities are under-supplied.

“The government is incompetent, and they don’t care about our interests,” Naji said. “We struggle every day in the hospital with a shortage of modern medicine, equipment, trained personnel. But why? This is not a poor country.”

Maher Rashid, 21, grew up in Basra, but moved to Baghdad to study because of a lack of educational opportunities in his home city, a problem which he blamed on the influence of religious parties in politics.

“It’s not as open as Baghdad… it’s more conservative and closed, so you don’t have opportunities,” Rashid said.

The poll also found poor Iraqis far more pessimistic than their better-off countrymen. One in four Iraqis live under the official poverty line, roughly $2 per day. “The security is better now, but I can’t feed my family with security,” said Ali Hassan, 19, a street vendor in Baghdad.

As for the security situation, many young Iraqis say they have simply learned to adapt; they often have chilling stories of what has come to pass for “normal” in this war-scarred country.

Naji spent 2006 and 2007, the worst years of Iraq’s sectarian violence, studying medicine in Baghdad. She said many of her professors were assassinated, part of a targeted campaign against academics in which hundreds were killed by militants. Thousands of others fled the country.

“It was surreal… it was a challenge to get to school and then to get home safely,” she said. “There were times when I thought I would not be able to finish school.”

It is difficult to quantify the psychological trauma caused by the war, because the Iraqi government does not have reliable mental health statistics.

But the data points which are available are striking: A United Nations survey found that one in five young Iraqis suffer from chronic headaches caused by stress; one in four show symptoms of PTSD. A 2009 study carried out by the World Health Organisation found that 17 per cent of Iraqis suffer from mental disorders, mostly depression, phobias and PTSD. 70 per cent of those afflicted have tried to commit suicide.

“We survived during the sectarian problems, but we couldn’t leave the house, we couldn’t do our jobs,” Rashid said. “Those were hard days.”

Rashid said he hopes the fighting has burned itself out, and that war-weariness is widespread here in Iraq. But there is also a widespread fear, that the government will provide the spark for renewed fighting. Recent moves by Prime Minister Nouri al-Maliki – accusing the vice-president of complicity in a bombing, for example – have only heightened that concern.

“The young people are tired of the war, we want to move on and rebuild,” said al-Jaburi. “But the government won’t let us.”