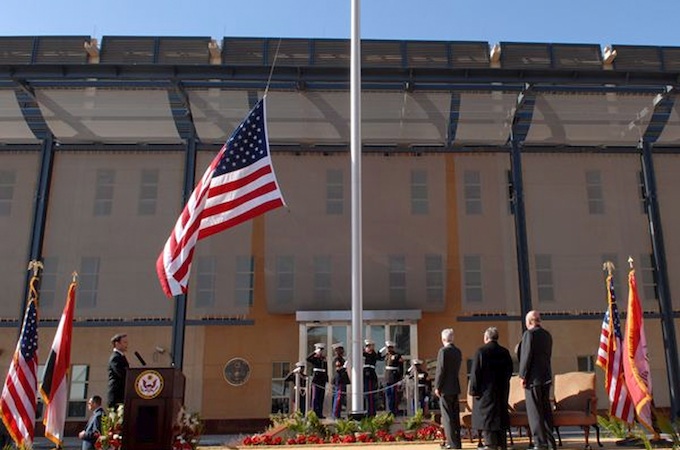 Baghdad, Iraq – It is a multi-million dollar programme which Iraqi officials have said they do not need, a US watchdog has called a “bottomless pit”, and the US embassy here considers a key part of its relationship with post-occupation Iraq.

The State Department will spend nearly $1bn in 2012 on a police training programme, the largest operation at the sprawling US embassy here. Dozens of former US police officers have been hired to teach their Iraqi counterparts about arrests and investigations, DNA evidence, and basic managerial tasks. Their resumes are impressive, most with decades of experience in domestic and international law enforcement.

But the programme has been a source of controversy, both in Washington and here in Baghdad. A US government watchdog report issued in October warned that it could become a “bottomless pit” for American money. And Iraq’s deputy interior minister said recently that he “doesn’t need” the programme.

“We are delivering,” a US embassy official said. “And we believe that we will be able to show that we are contributing substantially to the bilateral relationship.”

The training programme is perhaps a microcosm of the US’ long-term presence in Iraq. The US will withdraw the last of its troops from Iraq this month, but thousands of Americans will remain at a sprawling embassy on the banks of the Tigris River.

The billion-dollar complex, finished in 2009 after long delays and cost overruns, is the largest and most expensive American embassy in the world. It will eventually house some 17,000 employees.

The compound occupies 104 acres, twice the size of the White House compound in Washington, and includes not just an embassy building, but also housing for thousands of employees, cafeterias, a gym, a swimming pool and other facilities.

Price tag for the first year of operations: $3.8bn.

What does that massive investment buy the US? James Jeffrey, the US ambassador here, gave a circumspect answer in an interview last week.

“Influence is a hard thing to put your finger on, obviously,” Jeffrey told Al Jazeera. “But what it does is provide a whole variety of services, equipment and assistance to the Iraqi government.”

One of those services is the police programme. The October audit, conducted by the special inspector general for Iraq reconstruction, warned that the programme has no way to measure whether Iraqi police are actually improving; the programme at one point measured its success by the number of Iraqis who attended training courses, not the number who actually became effective police officers.

Just 12 per cent of the money allocated for the programme in 2011 was directly spent on Iraqi police. The rest went to secure and transport the scores of police advisers who operate it.

Officials here acknowledged that progress is difficult to measure, but said in an interview on Thursday that the Iraqi police were benefiting from their human rights and managerial training. And they defended the heavy spending on security as simply the reality of operating in Iraq.

“We’ve asked colleagues to come out here and assume risks,” the US official said. “That costs money.”

But deputy Interior Minister Adnan al-Asadi has said the billion-dollar programme will have “very little benefit” for his ministry, which oversees the police force.

“What tangible benefit will Iraqis see from this police training programme? With most of the money spent on lodging, security, support, all the [interior ministry] gets is a little expertise… I don’t need it,” he said.

Staffing and spending across the embassy is similarly focused on security. Diplomats here are tightly restricted; any movement outside the heavily-fortified “green zone” requires an armoured convoy. Many will leave the embassy only a handful of times during their year-long tours.

That’s why a majority of the staffers at the embassy will not be State Department staffers, but the private gunmen hired to protect them.

“There are plenty of Iraqis who want to have our assistance, who want to work with us,” Jeffrey said. “But is it easy to operate here? No.”

These private contractors hired to guard the embassy will cost American taxpayers billions, and many of them come from companies with a checkered past in Iraq.

Triple Canopy, for example, a company headquartered in Virginia, won a $1.5bn contract to protect diplomatic officials. The firm has been accused of numerous abuses in Iraq, including one incident in which a supervisor told his men, “I want to kill somebody today”, and later started shooting at an Iraqi vehicle. But no employees have ever been prosecuted, either in Iraq or in the United States.

Not all of the 17,000 personnel have arrived yet; around 8,000 are in-country, with more scheduled to begin their tours in 2012. But the planned expansion has already sparked a backlash in Iraq. Moqtada al-Sadr, the populist Shia cleric, issued a statement last month calling for “resistance” against US personnel at the embassy.

“If they stay in Iraq, through a military or non-military [presence]… we will consider them an occupation, and we will resist them whatever the price will be,” he said in an interview on Al Arabiya television. “Even a civilian presence, we reject it.”

Various armed groups have threatened to kidnap American diplomats in Baghdad, a plot Jeffrey described as credible. “Whoever it is seems to be putting some effort into it,” he said.

Jeffrey dismissed some of the criticism of the embassy’s size as posturing, calling it an effort by politicians to “position themselves within the Iraqi political spectrum”.

But the issue is unlikely to go away: Osama al-Nujaifi, the parliament speaker, this week called the size of the US embassy “illogical”, and has promised to question Prime Minister Nouri al-Maliki about it during an upcoming session.

“We will send an inquiry to the government to clarify the issue,” he said.