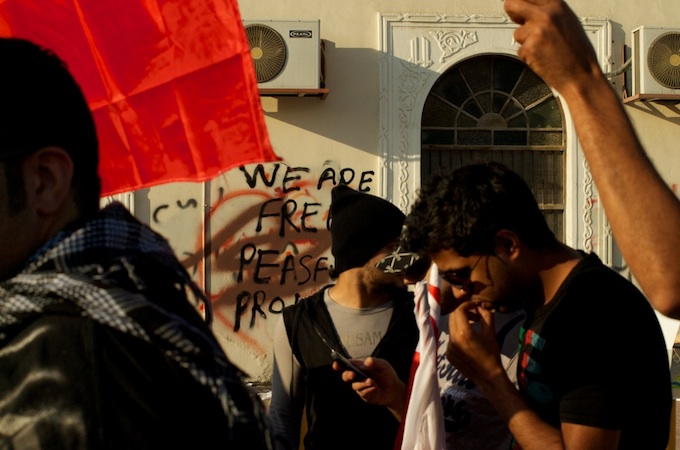 Manama, Bahrain – A nine-month crackdown by the government has not stopped Bahrain’s protest movement: Demonstrators still take to the streets to confront police, at times violently, and to denounce the government. As many point out, these anti-government protests have gone on, albeit on a smaller scale, for years.

But their efforts are limited these days to small protests and clashes in villages. Police have adopted tactics which would not feel out of place in the Israeli-occupied West Bank: checkpoints block major roads and the entrances to communities; convoys of armoured vehicles tear down narrow roads in villages; most demonstrations are prohibited.

The security measures mean that a visitor to Manama might not notice any signs of the unrest, save for the occasional police jeep splattered with a paint bomb thrown by protesters.

It is too early to tell whether police will continue the sorts of abuses the commission documented, though during clashes on Wednesday morning, hours before its release, they fired tear-gas canisters and sound bombs into a makeshift clinic in a private home, a practice criticised in the report.

The bigger question for many in Bahrain’s anti-government opposition, however, is whether the report leads to political reconciliation and reforms, and so far those efforts seem stalled.

Opposition leaders hoped for a major concession from the government last week, perhaps a prisoner release, when the official commission studying this year’s unrest released its report on human0rights abuses. None has been forthcoming.

All of this suggests that Bahrain’s slow-boiling crisis will drag on for the foreseeable future.

The formal political opposition is marginalised, and the street-level opposition is tightly restricted. However, protesters no longer seem to fear the government, not when women climb to the rooftops to chant yasqat Hamad (“Down with Hamad”) as tear-gas canisters whiz overhead.

“I almost hope that I am arrested,” one female activist said on Tuesday.

‘This government must resign’

King Hamad bin Isa Al Khalifa’s only response to the report, so far, has been to establish a new commission entrusted with studying the previous commission’s work. He announced the panel during a speech on Wednesday, and formally established it on Saturday via a royal decree.

The announcement was greeted with scorn by the opposition, which dismissed it as a stalling tactic.

Al Wefaq, which has normally been careful in its criticism of the government, refused to work with the commission unless Hamad first sacks his cabinet. He asked two members of the party to join the new commission, and both refused. 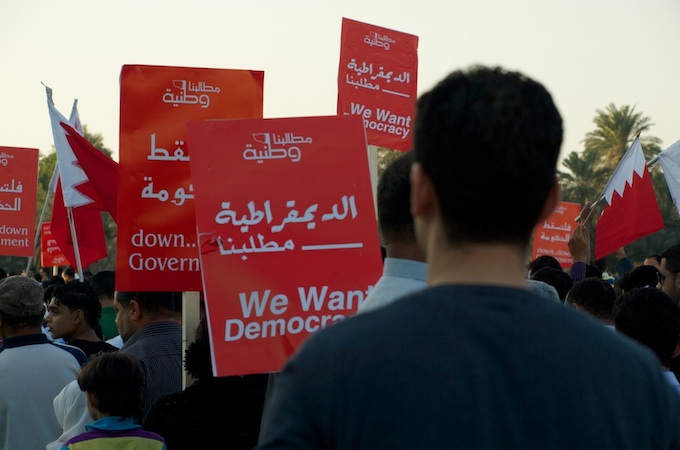 “We will not work or co-operate with the present government, and we demand for its resignation,” Khalil Marzooq, a senior member of Al Wefaq, said.

“This government must resign, because it’s proved now that it has killed and tortured our citizens.”

The government, in turn, has sought to cast the opposition’s refusal as a delaying tactic.

Khalid Al Khalifa, Bahrain’s foreign minister, said this week that the cabinet is a “legitimate government appointed by the king” and dismissed calls for its removal.

The political standoff, in some ways, parallels a similar deadlock this summer, when the king launched a “national dialogue.

“Al Wefaq withdrew from the talks after a few weeks, describing them as “not serious,” a decision which some opposition supporters now consider a tactical error.

“The [dialogue] was killed by the opposition, not by us,” Khalid Al Khalifa said. “Now the only thing on the table is the BICI recommendations, and the independent committee that will result from it.”

The opposition, indeed, remains divided over its ultimate goals. Al Wefaq and other parties handed out carefully worded signs at a protest on Friday, inscribed with messages like “Down with the government” and “We want democracy”.

Wefaq members at the rally stressed to journalists that they wanted only to reform the existing system.

But when the protesters chanted, their loudest refrain was yasqat Hamad (“Down with Hamad”), an unambiguous message for the country’s monarch.

In lieu of political progress, then, many anti-government activists say they should attempt to escalate their popular protests.

Friday’s march was officially sanctioned, and it went off without incident; those rallies are a “safety valve” of sorts, a way for the government to allow members of the opposition to vent their anger.

More common are the unlicensed rallies, which are often broken up within minutes by police.

A group of protesters gathered for one such march in A’ali on Wednesday night, hours after the commission’s report was released. They assembled at a secret location, arriving in twos and threes, smoking and talking under moonlit palm trees while they waited for a crowd to build. Few of them looked older than 18.

None had much enthusiasm for the report. One dismissed it because it did not call for the removal of Khalifa ibn Salman Al Khalifa, Bahrain’s prime minister and a reviled figure among the opposition.

Another joked about state television – referring to the channel with a word for male genitalia – which ignored some of the report’s conclusions and misreported others.

Wednesday’s march broke up quickly, and protesters scattered after police fired off a volley of tear gas. A larger rally on Thurdsay, after a funeral in A’ali, met with a harsher response. Protesters threw stones and Molotov cocktails at police, who then stormed into the village, firing tear gas and sound bombs and searching houses.

“All the villages are facing collective punishment,” Nabeel Rajab, the president of the Bahrain Centre for Human Rights, a leading opposition group, said. “They punish the whole village, they force the elderly people to stop the youth from protesting.”

A surprising number of activists this week said they wanted to try a high-profile, and high-risk, public protest. Khalil Mahmoud, an Al Wefaq supporter at Friday’s rally, suggested protesters would return to Pearl Roundabout (now renamed GCC Roundabout), the site of protests this spring.

“They will try to go back to the square,” he said. “If not, they will go to option B, option C. Maybe they will go to the US embassy, or the naval base,” home of the US Fifth Fleet.

That would be a dangerous idea, to put it mildly: Troops are stationed inside the roundabout, and the entrances are blocked with concrete barriers and armoured vehicles.

Still, a number of protesters this week said a return was inevitable. Graffiti showing the roundabout’s now-demolished pearl monument, with the caption “we will return,” adorns the walls of buildings in many of Bahrain’s villages.

“They must try,” Mahmoud said.