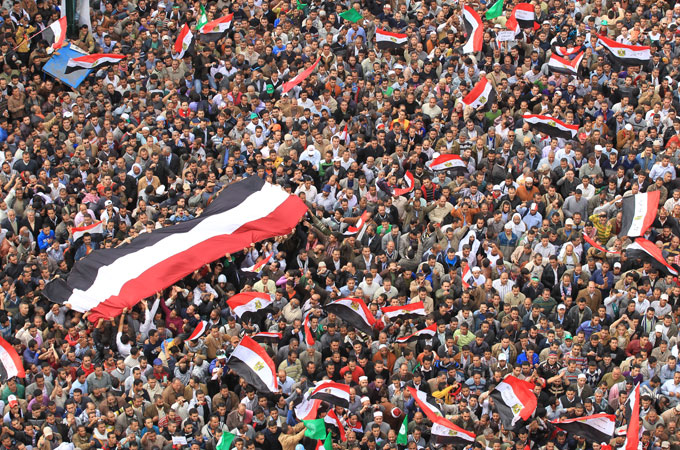 Why has there been an escalation in protests in Egypt?

The earthquake that transformed Egypt in the beginning of the year hasn’t reached far or deep enough because the military – the backbone of the Mubarak regime – sided with the revolutionaries in the hope of safeguarding its status and privileges.

And last week the brass tried to force their will on the people and the revolution by presenting their version of the constitution that will govern the country in the future, triggering anger and disappointment among the majority of the body politique in the country.

The military’s draft does contain some good guidelines and principles. But putting the armed forces above the state and above all three civilian authorities is a policy borrowed from a past era and has no place in Egypt’s democratic future.

The ill-timed and ill-fated attempt by the generals to go about business as usual didn’t go down well with those insisting the people are the source of all constitutional legitimacy.

Furthermore, the excessive use of force by the security forces that seem to act with vengeance against protesters, killing tens and injuring hundreds within a few hours is absolutely unacceptable to Egyptians in the post Mubarak era.

Egypt’s ruling military could and should have shown far more restraint in advancing their interests and in responding to the legitimate right of Egyptians, especially the families of those killed during the revolution who demonstrated late Friday after the large turn out in Tahrir Square and other squares in the country.

As the prestigious, Cairo-based Al-Azhar underlined in its ‘Arab Spring charter’ guidelines for democracy in the Arab world earlier this month, the use of violence against peaceful citizens delegitimises the ruling authority and ends its reason d’etre.

Is that why the Sharaf government resigned?

The government that contends to speak in the name of the people/revolution couldn’t and shouldn’t accept such bloodshed to be carried out in its name or under its watch.

Prime Minister Issam Sharaf was one of the first politicians to come into Tahrir Square to be with the revolutionaries after his appointment to make it clear where he stood. Several months later however, it’s obvious that SCAF, not the civilian government, has been governing Egypt since revolution.

That’s why regardless of the identity of the next interim or care taker government through the elections, it must insist on its autonomy from the generals to ensure its credibility in the eyes of the people.

Indeed, the roadmap towards democracy must be transparent and fully representative of the revolutionary forces.

As some of Egypt’s leading independent intellectuals proposed, the way forward must begin with a civilian government for national salvation with the needed authorities, followed by an election of a special commission that will write up a constitution, followed by presidential elections that end SCAF’s mandate and puts the country completely and entirely on civic and democratic tracks.

The revolution is not about half measures. It’s about a clean break with the past. Better that such transformation take place through peaceful transition, but take place it must. There’s no other way towards fulfilling the goals of the revolution.

But would the military accept to return to the barracks and forgo its privileges?

In the end of the day the generals have no other choice but to side with the people of Egypt. This is not only common sense it’s in their and the country’s vital interest.

Egypt’s national security is at stake, and Egyptians wouldn’t have it any other way.

They want their military to be strong in order to protect the sovereignty and independence of the nation. And the military needs a strong and vibrant democracy if they are to be a force to reckon with in the 21st century.

Indeed, the armed forces have an important role in ensuring the respect of the country’s constitution on the long term.

That can’t be the case if they are to become its primary violators.

And that also means that the military is part and parcel of the state’s institutions and falls under, not above, the sovereignty of the nation.

The generals can’t have their cake and eat it too. A democracy isn’t functional if it’s not extended to the armed forces.

The generals couldn’t decide their own budget and impose it on the people, or carve their own area of interest in the economy and polity of the nation.

Nor should they be exempted from retrospection or alternation that serves the higher interest of the country and its national security.

There is an easy way and an arduous way for all this to happen. But either way, happen it will, sooner or later. The people have spoken loud and clear. It’s up to the generals to stand up and salute the steadfast of their people and save the nation unneeded delays and suffering.

Marwan Bishara’s upcoming Book, The Invisible Arab: the promise and peril of the Arab revolutions, comes out in January 2012.